The study of the New Testament gained pace at the time of the Reformation. Protestants, following Martin Luther, demanded that the Bible be translated into local languages - but the question soon arose as to which Bible should be translated - which books and which parts of which books? In which order?

For example, Luther's German translation of 1534 followed quite a different order to the Latin Bibles of the time. Initially, Luther disapproved of Esther, Hebrews, James, Jude and Revelation. He referred to James as "an epistle of straw," perhaps because James taught that works or actions mattered more than faith or sacrament – quite the opposite of what Luther himself taught – and he argued that the epistle was late and unreliable. He said of the book of Revelation that he could "in no way detect that the Holy Spirit produced it." Luther placed James and Revelation, along with Hebrews and the book of Jude at the end of his New Testament explaining that what came before them are "the true and certain chief books of the New Testament" but that "the four which follow have from ancient times had a different reputation." Although Luther was keen that people read the Bible for themselves, he was not insensitive to the theological problems that this was likely to cause if they were not given guidance.

The business of translating the Bible was extremely difficult and controversial. Things moved on from single scholars producing a whole translation pretty much by themselves; soon teams of the most able scholars were assembled and worked for decades to produce better versions of the text. Nevertheless, there has not been a definitive translation into any language and, although the Bible is already available in languages in which 98 per cent of the world's population is fluent (some 2,400 different languages), the United Bible Society is currently assisting 600 different Bible translation projects.

Look at a popular online Bible site such as biblegateway.com to see the number of different versions available in each major language and to see how a passage such as John 1:1-3 varies between translations (NIV = New International Version, YLT = Young's Literal Translation, GNB = Good News Translation and CEB = Common English Bible):

The differences may not seem very great, but in some places they can be significant and can change the sense of a passage. This is even more apparent when translations into different languages are compared. For example, in Genesis 3 the fruit that Eve picks is sometimes translated as "apple" in English versions of the Bible when in Hebrew "pomegranate" would be more usual (though the word is a generic one for fruit) and in the Caribbean some versions of the Bible suggest that Eve picked a coconut! Look at the opening words of the Bible:

• NIV 1 In the beginning God created the heavens and the earth. 2 Now the earth was formless and empty, darkness was over the surface of the deep, and the Spirit of God was hovering over the waters.

• GNB 1 In the beginning, when God created the universe, 2 the earth was formless and desolate. The raging ocean that covered everything was engulfed in total darkness, and the Spirit of God was moving over the water. 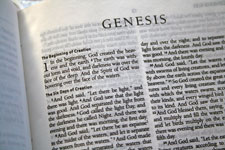 • CEB 1 When God began to create the heavens and the earth 2 the earth was without shape or form, it was dark over the deep sea, and God's wind swept over the waters

Note how the Good News translation, which is often the only version available in churches and schools, is actually the most likely to paraphrase or translate to make the generally accepted sense clear rather than to render the actual words accurately. For the purposes of textual study it is important to choose a translation of the Bible which is recognised as being very accurate. At this level examination boards and universities usually give recommendations, but as a general rule look for NIV or NRSV versions (Catholic schools may prefer the NJB).