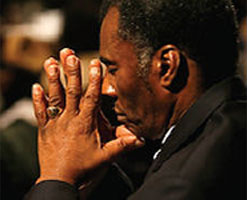 The nature of God for Christians is revealed through Creation and through specific revelations, whether through the Bible, prophets or individual experiences. Revelation is, for many believers, the basis for faith. It is probably fair to say that more people are likely to believe and worship something they encounter through personal experience or testimony than something they arrive at through argument or reasoning.

Religious experiences have been studied and categorised at length by scholars from William James and Rudolph Otto to William Alston. There is some agreement over the characteristics of such experiences - particularly that they tend to be transient, passive and are often life-changing. However it is a mistake to stress the similarity of experiences when, in fact, they are diverse. Experiences may be solitary or they may be corporate (as in the Toronto Blessing of the 1990s), they may be fleeting or they may endure for hours or days. Scientifically the diversity of experiences makes them difficult to explain. Though some specific phenomena may have a physiological cause (for example the sensation of being in a dark tunnel with a bright light at the end in a near-death experience), and others may have a psychological or hormonal cause (for example the sensations of heightened physical awareness often reported by teenage girls and menopausal women), the whole variety and prevalence of "religious experiences" is difficult to explain away.

Hume defined miracles as "a transgression of the laws of nature by particular volition of the deity" and argued that it would be wrong to accept testimony of miracles as support for the existence of God because:

1. It is always more probable that the miracle did not occur than that it did - the alternative scientific explanation is always more probable, however unlikely it seems.
2. Witnesses tend to be unreliable.
3. Most testimony comes from "ignorant and barbarous nations"
4. Testimony of miracles comes from competing religious traditions and claims to support the existence of different Gods.

Although Hume's critique is not conclusive (some people do not accept his definition of a miracle and each of the other criticisms may not apply to any one case), it does mean that miracles and religious experiences tend to be cited as part of cumulative arguments for God's existence rather than as stand-alone arguments in themselves.

The selectiveness implicit in miracles

The major problem with using them even in this context is, of course, the implications of miracles and religious experiences for our concept of God. Not only do the events suggest a God who has reflective knowledge of the universe and who acts in time, but they also raise questions over God's goodness and justice. Why would God reveal himself to some people and not others? Does this mean that people who have no faith are responsible if they also had no revelation? Is faith based on revelation more or less valuable to God than faith not based on revelation? Scholars from the German philosopher Gottfried Leibniz to Oxford theologian Maurice Wiles have rejected miracles and religious experiences just because they raise such problems for the philosopher. They suggest that they have more to do with wish-fulfilment than with direct action.

Of course it may be that God has designed the world in such a way as to allow wishes to be fulfilled sometimes, or to allow intermediary beings (angels or saints) to act on his behalf to reinforce faith when it is appropriate and possible. This pushes miracles and religious experiences back from the realm of extra-special acts of providence into the realm of general or maybe special providence and does protect a philosophically coherent model of God – even if it would not seem very satisfactory to many ordinary believers.