The development of the New Testament

Today scholarly consensus (drawing on insights from textual, source, form and redaction criticism) suggests that the New Testament went through nearly 300 years of development before reaching a state we would recognise.

It is generally accepted that most sayings, teachings and stories of Jesus were preserved orally in the first instance. Oral tradition was not, however, as unreliable a form of preservation as might be thought today. In an age before most people were literate, it was entirely usual to rely on oral retelling of important and detailed information. Indeed, within the Orthodox Jewish and Muslim traditions it is still accepted to be more reliable to memorise holy texts than to rely on copied or printed versions. Although it was usual for people to add commentary or explanation to stories in the retelling, it would have been understood that this was what they were doing. It was not intended to mislead and seldom would have.

Oral tradition gave rise to one or more written collections of material within two decades of Jesus' death. Most scholars accept the existence of "Q", a collection of sayings, and some suggest that other written sources existed as well.

Mark's Gospel is usually understood as the first; it is the shortest (lacking the nativity and childhood stories and any original resurrection narrative) and it is written in crude Greek. Theologically it portrays Jesus as human, like a great prophet, despite referring to him repeatedly as "Son of God". This, along with several references which suggest that Peter was a source, has suggested that the Gospel was written in Rome or its environs, probably around the time of Peter's execution in 64CE.

Mark's theology is awkward, his language is clumsy and his story is short; according to the principles of textual criticism this suggests an early date as later writers would tend to make things easier and more acceptable, often by explaining and using more convincing language. Matthew and Luke contain most of the material found in Mark, along with some other shared material and material which is unique to each of them. The usual suggestion is that both Matthew and Luke had access to Mark's Gospel, or that Luke had access to Matthew's Gospel, and that they had other sources, some shared and some not.

Nevertheless, Mark's Gospel does seem to have a sophisticated structure. It is chiastic, that is, it is symmetrical with events being arranged in such a way that they surround the climactic scene of the Transfiguration in chapter 9, where Jesus' identity is revealed to the disciples. Shakespeare's The Tempest has a similar chiastic structure. It shares some of the characteristics of Greek drama. Could Mark have been written in another language, such as Aramaic, and then translated into Greek badly? Could the gospel have been composed in the mind of an extremely bright but illiterate person who was forced to use an incompetent scribe, or who was attempting to appeal to an uneducated audience? We will, of course, never know but it is interesting to consider how these different hypotheses might influence our understanding of the Gospel message.

Matthew's Gospel has a preoccupation with Jewish law and several references to locations and events within Judea; it is usually suggested that it was written by an educated Jew in Judea around 70AD, the date of the destruction of the Temple following the Jewish-Roman war.

Luke begins like a letter and was apparently written by a Greek doctor and sometime companion of St Paul to a wealthy patron called Theophilus. The book of Acts is apparently by the same author. A relatively late date is usually assigned to Luke's Gospel, around 80AD, though Paul was preaching in the 50s and is thought to have died in around 64AD. Luke's Gospel has a highly developed theology and probably the most literary style and language.

The business of trying to untangle the literary relationships between Mark, Matthew and Luke is known as "the synoptic problem" (Greek sun (meaning "together") and optika ("seen") and refers to the fact that the three Gospels share so much material).

It is obvious from first reading that John's Gospel is quite different. It begins with a Prologue, which reads like a hymn or poem, and refers to Jesus as "the Word" (Greek Logos) and suggests that he was pre-existent, with God, maybe God himself – which sits uncomfortably with Jewish ideas as we understand them. Theologically it does not see Jesus as an ordinary prophet, but rather stresses his divinity – and not in a Graeco-Roman sense as Mark's account does. The text of John's Gospel is punctuated by a series of 12 "I am" (Greek ego eimi) sayings that suggest that Jesus was in no doubt as to his identity, importance and the course his life would take. Jesus is uncompromising; he states that "nobody comes to the Father except through me" and makes several rude remarks about the Jewish people (for example, John 8:44). These remarks have sadly been used as excuse for appalling anti-Semitism by some Christians, though arguably this relies on them being taken out of context. In an article on anti-Semitism in the gospels Dr Christopher Probst, a fellow at the United States Holocaust Memorial Museum in Washington, DC, writes that Jewish-American scholar Samuel Sandmel "seems to see the ‘anti-Semitism' of Matthew as less subtle than that of the Gospel of Luke, but less caustic than that of the Gospel of John".

There are no stories about Jesus' birth or childhood in John's Gospel; the events of his life are compressed into just one year and follow a different order - actually beginning (after the calling of the disciples and the wedding at Cana) with the cleansing of the Temple, which begins the Passion narratives in the synoptic gospels. The text of the gospel is elegant in both style and structure (though the Greek is arguably not as beautiful as that of Luke's Gospel). It is not just a matter of seeing the fourth gospel as a literary and theological reworking of a somewhat muddled historical account, as provided by the synoptic gospels, however. Some stories only appear in John, for example the wedding at Cana. The gospel contains what appear to be eyewitness details and many topographical references that imply that the author or a close source was a resident in or near Jerusalem.

Although there are references, such as those to the paraclete (the Greek for "counsellor") which suggest that Jesus expected there to be a reasonable interval between his own departure from Earth and the coming of God's kingdom, in the 1960s John Robinson found grounds to argue that the fourth gospel was actually earlier than the synoptics and written in the 50s (rather than the 90s as most scholars suggest today). He pointed out that most New Testament scholars assume that earlier works are shorter, simpler, have an "immanent eschatology" (ie a firm belief that the end of time is close by) and have a "lower Christology" (ie they see Jesus as more human) – whereas in fact there is no reason to believe that people always add to and complicate stories or that people who knew Jesus or who knew his friends could not have believed that he was divine.

Theories regarding dates and authorship

Perhaps the gospels were written for different audiences, by authors with different levels of skill and different literary styles - perhaps it was easier for people who did not have direct knowledge of Jesus to smooth over the difficulties caused by claiming his divinity by re-interpreting him as a prophet. John's Christology is certainly "difficult" and it is an established principle of textual criticism to say that the more difficult a passage is, the more likely it is to be authentic. Paul's letters are certainly not simple and do not have a particularly low Christology, yet nobody suggests that they must have been written in or close to the second century. Eschatology may not be a guide to dating a text either; some people today believe that the world is about to end and it does not mean that their writings are more ancient or reliable than the writings of people who see the end as unknown or distant.

On the other hand, the assumptions that texts tend to get longer, more complicated, more theologically and eschatologically sophisticated are fundamental in biblical criticism and have been accepted since the eigteenth century. Without these assumptions many insights offered by scholars would be undermined. In the end nobody can prove the dating or authorship of the gospels and it comes down to which hypotheses are useful, i.e. which help to explain the differences between the gospels best and which help us to interpret what they say about Jesus. 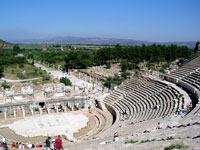 Recent commentaries on John's Gospel have tended to see that it emerged from a relatively isolated Christian community, referred to as "the Johannine community". Early Church tradition associated the gospel with the John who led the Church in Ephesus for many years - known as John the Apostle, or John the Elder - and who may or may not have been one of the original disciples. John the Elder's many years and the community's location may account for the differences in style and theology between the synoptics and the fourth gospel. Literary analysis also suggests that the books of 1 John (possibly 2 and 3 John) and Revelation probably came from the same author, in the same way as the book of Acts can be confirmed to be by the hand of the author of Luke.

The Catholic Encyclopaedia has a useful article on John's Gospel, which argues the case for it being written by John the Apostle (click here to read it) though this conclusion is not universally accepted. This article (click here) on the authorship of John shows the complexity of the debate, while arguing for the same conclusion. For a page of online resources on John's Gospel click here.