In Classical times huge advances were made, particularly in Greece. Mathematics, astronomy and geometry were refined and some of the most important scientific principles were developed.

In the fifth century BC Leucippus and his pupil Democritus refused to accept the ancient supernatural explanations of nature and proclaimed categorically that every event had a natural cause. The two of them were proponents of a concept that all matter is comprised of tiny particles which were so small that they could not be broken up. These particles were called atoms, from a Greek word for "indivisible".

Aristotle (384-322 BC) promoted the concept that observation of physical phenomena could ultimately lead to the discovery of natural laws governing those phenomena, though unlike Leucippus and Democritus, Aristotle believed that these natural laws were ultimately divine in nature. His was a philosophy of nature, an observational science based on reason. He has rightly been criticised for a lack of rigour (if not outright carelessness) in his observations. For example, he states that men have more teeth than women, which is not true. He did not use experiments to test and replicate his observations. Nevertheless Aristotle's science was hugely influential, indeed it dominated human understanding of the natural world prior to the eighteenth-century Enlightenment and some of his ideas have lasted, for example the classification of plants and animals into genera.

One of Aristotle's interests was the motion of objects. He asked basic questions such as "Why does a rock fall while smoke rises?", "Why does water flow downward while flames dance into the air?" and "Why do the planets move across the sky?" and explained these phenomena by describing the nature of the world. For Aristotle, all matter was composed of five elements (fire, earth, air, water and ether, a divine substance of the heavens). These elements interchange and relate to each other. The worldly elements (fire, earth, air and water) each had natural realms. For example, we exist where the earth realm (the ground beneath our feet) meets the air realm (the air all around us and up as high as we can see). The natural state of objects was at rest, in balance with the elements of which they were composed. The motion of objects, therefore, was an attempt by the object to reach its natural state. A rock falls because the earth realm is down. Water flows downward because its natural realm is beneath the earth realm. Smoke rises because it is comprised of both air and fire, thus it tries to reach the high fire realm, which is also why flames extend upward. 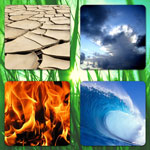 Aristotle understood natural objects in terms of four causes. Everything is made up of basic ingredients, which he called "material causes". For example, the material causes of an oak tree world be carbon, oxygen, hydrogen etc. These ingredients are brought together by "efficient causes", the actions and agents that cause the particular object to exist. For example, the efficient causes of our oak tree might be the acorn falling on the forest floor, a squirrel burying it, the action of sun, rain and wind etc. What makes the object what it is is its formal cause, that which makes something a tree and an oak rather than an ash, its recipe or DNA in modern terms. Ultimately all things aim towards a final cause, a reason for being, the fulfillment of their nature, flourishing. Aristotle's theory of causation brought together his scientific and ethical work. He saw that goodness exists in an object (or person) fulfilling their nature and so flourishing. We can understand human nature and what it is to be good in the same way as we can understand the nature of an oak tree, through observation and rational analysis.

A full explanation of Aristotle's ethics can be found here.

Aristotle did not attempt describe the reality that he observed mathematically. Though he formalised logic, he considered mathematics and the natural world to be fundamentally unrelated. Mathematics was, in his view, concerned with unchanging objects that lacked reality, while his natural philosophy focused upon changing objects with a reality of their own. 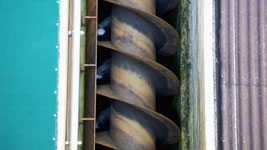 Archimedes (287-212 BC) is known for several important breakthroughs. Voltaire remarked that "There was more imagination in the head of Archimedes than in that of Homer." He:

· outlined the mathematical principles of the lever, one of the oldest machines
· created elaborate pulley systems, reputedly having been able to move a full-size ship by pulling on a single rope

· defined the concept of the centre of gravity created the field of statics, using Greek geometry to find equilibrium states for objects - a task that would be taxing for modern physicists
· was reputed to have built many inventions, including a "water screw" for irrigation and war machines that helped Syracuse against Rome in the First Punic War.
· is attributed by some with inventing the odometer to measure distance during this time, though that has not been proven.

Perhaps Archimedes' greatest achievement, however, was to reconcile Aristotle's great error of separating mathematics and nature. As the first mathematical physicist, he showed that detailed mathematics could be applied with creativity and imagination for both theoretical and practical results.

Hipparchus (190-120 BC) was born in Turkey, though he was a Greek. He is considered by many to be the greatest observational astronomer of ancient Greece. With trigonometric tables that he developed, he applied geometry rigorously to the study of astronomy and was able to predict solar eclipses. He also studied the motion of the sun and moon, calculating with greater precision than any before him their distance, size, and parallax. To aid him in this work, he improved many of the tools used in naked-eye observations of the time. The mathematics he used indicates that Hipparchus may have studied Babylonian mathematics and been responsible for bringing some of that knowledge to Greece. Hipparchus is reputed to have written 14 books, but the only direct work that remains was a commentary on a popular astronomical poem. Stories tell of Hipparchus having calculated the circumference of the earth, but this is in some dispute.

Ptolemy's view of the universe

The last great astronomer of the ancient world was Claudius Ptolemaeus, known as Ptolemy. In the second century AD he wrote a summary of ancient astronomy (borrowed heavily from Hipparchus) which came to be known as the Almagest (the greatest). He outlined the geocentric model of the universe, describing a series of concentric circles and spheres upon which other planets moved. The combinations had to be exceedingly complicated to account for the observed motions, but his work was adequate enough that for 14 centuries it was seen as the comprehensive statement on heavenly motion. This view of the universe was almost universally accepted. Suggesting that the earth moved round the sun was at that time unthinkable, ridiculous.