Joseph Fletcher (1905-91), an American professor and Episcopalian (Anglican) priest, wrote a book called Situation ethics in 1966. He noted that Christians, like the Pharisees who Jesus rebuked, had become unable to see the wood for the trees and were obsessing about the minutiae rather than living in the spirit of Christianity. Fletcher's argument is persuasive; he uses powerful examples to get his point across. One such is the story of a group of refugees escaping a murderous army in Africa by night. A mother with a new baby has to decide whether to smother it to stop its cries giving away the whole group or to protect her child and see the whole group, including the child, captured and killed. Fletcher suggests that the loving mother would smother her child - he condemns any ethical system which would condemn this action as legalistic, not person-centred and contrary to the Christian principle of love as he understands it.

However the upshot of Fletcher's theory is that it is very easy for individual Christians to justify doing what they want. For this reason, because it puts far too much emphasis on the individual's right and ability to choose what is right, both the Roman Catholic and the Anglican Churches dismissed Situation ethics as a system of making Christian decisions and labelled the book dangerous, as it may discourage people from wrestling with the difficult choices that being a Christian demands.

Why is the Church so determined not to accept situation ethics? It is, after all, a version of the most commonly used and widely accepted ethical system, utilitarianism.

Utilitarianism, product of the Industrial Revolution 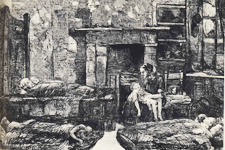 Utilitarianism was born out of the social confusion caused by the Industrial Revolution and the Enlightenment. Ancient communities were broken up as thousands flocked to work in factories, which were often set up near supplies of raw materials, miles from the basic services workers needed. There were few churches and fewer schools, representation in parliament was almost non-existent and there was no real police force. People from all over the British Isles and the Empire were jumbled together under stressful conditions and, as might be expected, the results were not pretty.

Marx and Engels described the conditions in Manchester, where 4.4 per cent of children died before their fifth birthday, rates of infectious diseases was four times higher than in surrounding areas and crime rates high. They railed against an unfair system that was seemingly designed to keep the poor poor and the rich rich. Employers judged employees for being illiterate when they had no opportunity to learn and worse, judges judged people guilty against laws they did not know about or understand. Why is it wrong to steal bread to feed a starving baby from a rich person's kitchen where it will not be missed? Thousands were deported to Australia or worse for similar crimes. 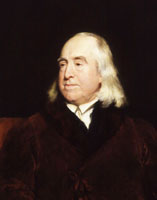 Jeremy Bentham (1748-1832), a wealthy lawyer and politician, saw the awful and unfair conditions and tried to do something about them. He campaigned tirelessly for the law to be rationalised and for opportunities to be extended to all. Looking back to the Greek philosopher Epicurus, he believed that all human beings share a desire for pleasure and to avoid pain. From this he determined the basis of a new ethic, later dubbed utilitarianism, "always act so as to produce the greatest happiness for the greatest number of people". Of course even Bentham knew that things are really not so simple. Are all pleasures equal? How should we measure pleasure? How should we really go about calculating the right action? Bentham's answers, that "all things being equal, poetry is as good as pushpin," that pleasure can be measured according to its "intensity, duration, fruitfulness, extent, purity, certainty and nearness," and that we can make moral decisions by simply applying a "hedonic calculus", namely "pleasure over pain times number equals right action", are the subject of much controversy, even today.

In the nineteenth century Bentham's system was radical and the subject of a good deal of mockery. Most educated people doubted ordinary people's ability to make rational decisions and certainly resented being told that their own cultivated pleasures should be counted the same as the rustic amusement of peasants. Back then democracy was a dirty word and the idea that each person should count for the same in a hedonic calculation - whether the Queen or a cotton-mill employee - was scandalous. But before we laugh and say how much things have changed, ask yourself how you might react if there was a choice between saving a respected doctor and three convicts, or how Western governments make choices about the environment or war - is one African life really treated as being equal with an American life?

Thus far it is quite easy to see why most Christians would reject utilitarianism. Maximising the happiness in society does not necessarily mean promoting what is right. Looking at the front pages of tabloid newspapers and the covers of glossy magazines will show that a lot of what is popular is not in line with Christian principles, which value the sanctity of life, the rule of law and giving people a second chance. More people might be made immediately happy than sad if we permitted paedophiles to be publicly tortured - but that doesn't mean that it would be right to permit it. Situation ethics risks being classed with basic utilitarianism. On first reading it seems that a situationist could allow anything, given appropriate circumstances. Thus like utilitarianism it puts great weight on the individual to calculate what is right for themselves, trusting that their own understanding of the situation is complete, accurate and objective. Of course, we know that individual understanding is flawed and therefore that prediction causes a major problem for consequentialist systems of ethics that depend on knowing what an outcome will be.

John Stuart Mill was one who disagreed with Bentham on some of the key questions. Mill's utilitarianism suggests that there are some absolute values to which we should aspire beyond the basic pursuit of pleasure as it is usually understood. Mill claims that we achieve real pleasure through pursuing justice, truth, beauty, right - but we are unlikely to be grinning along the way. Mill represents a bringing together of two usually opposed ways of thinking - that of Fletcher (though that may be unkind), Bentham and the simple utilitarian which places simple happiness above all else, with that of Kant, Aristotle, Aquinas and many others who see that true human fulfilment lies in pursuing higher goals, even if there may be suffering along the way. In Mill though we can see that the two ways of thinking do not have to be opposed - the latter is just a different way of looking at and applying the former. 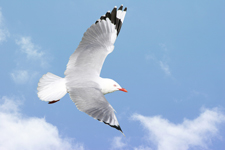 Immanuel Kant's ethics are often caricatured as "duty ethics" but this leads to gross misunderstandings. The English word "duty" conjures up lists of arbitrary chores and is associated with punishments. In German and Greek, the words "Pflichte" and "deontos" (though translated into English as "duty") actually refer to a function of something's being. "Deontos" is actually the participle of the verb "einei", to be, and so means "of being". For example, a seagull's function is to fly - a seagull that cannot fly is somehow less than fully a seagull and condemned to be unfulfilled, disappointed and disappointing. For Kant our human function is to be rational and free - a human being who is irrational or enslaved in thought or deed is less than fully human, unfulfilled. Like Aristotle, Kant's ethics are designed to support human flourishing, both on an individual and a corporate level.

Kant's categorical imperative was clearly inspired by the Gospels which shaped his upbringing. He gave six versions of the imperative in the Groundwork for the metaphysics of morals but basically they boil down to the Christian Golden Rule (which has equivalents in most other religious traditions): Love one another and do unto others as you would like to be done to. For Kant this equated to acting rationally on a single principle, recognising that there is no difference between oneself or those we prefer and any other human person, acting justly and treating all people as valued equals in every situation.

For Kant there is no way we can know God exists, but positing his existence is the best way of making sense of a world which makes sense. There can be no reason for the world to be as fair and ordered as it appears to be unless it is sustained by a single principle of goodness. Kantian ethics are not religious but accepting our common humanity and the call of duty, our common human nature, arises from an acceptance of the world as an ordered and beautiful place that didn't just arise by accident. On Kant's tombstone is inscribed a line from his works: "Two things ever fill me with awe: the starry skies above me and the moral law within me". For Kant there was a fundamental connection between the two, the exterior and the interior, the huge scale and the small. He was searching for a "theory of everything" which would explain this connection but, like so many scientists today, struggled to put it into words.

Kant's ethic is often dismissed as being cold, unfeeling - and so it is in a way. Yet for Kant every decision must be made freely out of a love of the law and a non-preferential love for humanity. Yet it is important to remember that however detached, disinterested, objective the decision-making process must be, it must be motivated by love. Thus Kant's ethic is not a million miles from that of Jesus and Paul in the New Testament. To act on love is not to do what you want; it is to follow the demands of the law and to consider the interests of all people equally. Kant, Jesus and Paul would surely agree that it is not possible to condone murder, theft or lying in a spirit of love. Christian love, agape, is tough - and certainly a million miles away from trying to promote smiley faces.