The universe is undoubtedly wonderfully ordered. And for it to exist as it does, a whole range of scientific phenomena that could have been other than they are have to be just as they are, all at once. It is far more likely therefore – theologians and even many scientists agree – that this is the result of design (and so, necessarily, a designer) than that it all happened "in one throw of the dice". Moreover, would we even have a desire for "something beyond this world" if nothing nothing at all beyond this world existed? 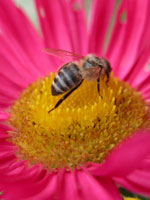 The inductive teleological argument, more commonly known as the design argument, is one of the oldest and still most convincing of the arguments for God’s existence, at least on a human level. Like the cosmological argument it is an inductive, a posteriori proof, which moves from observations of the natural world to a conclusion of God to explain them. The design argument is sometimes called the teleological argument, from the Greek telos, meaning "end" – this title focuses on the observation that all things seem created to fulfil a purpose or do a job. Kant refers to it as the "physico-theological" proof; proof that moves from physical observations to theological conclusions. This argument, like the cosmological argument with which it shares so many features, is technically a strong argument. This because it rests on experience. Nevertheless, you may not be convinced by all of its formulations.

The fifth way of St Thomas Aquinas is one of the clearest statements of the teleological argument:

5. The governance of the world

The fifth way is taken from the governance of the world. We see that things which lack knowledge, such as natural bodies, act for an end, and this is evident from their acting always, or nearly always, in the same way, so as to obtain the best result. Hence it is plain that they achieve their end, not fortuitously, but designedly. Now, whatever lacks knowledge cannot move towards an end, unless it be directed by some being endowed with knowledge and intelligence, as the arrow is directed by the archer. Therefore, some intelligent being exists by whom all natural things are directed to their end; and this being we call God.

This is an argument qua purpose, a true teleological argument. It focuses on the impression that we have of things being designed to do a job. It is this line of argument which is most damaged by the theory of evolution by natural selection. The term evolution and the phrase “the survival of the fittest” was first coined by Herbert Spencer (1820-1903) in 1852 in an article defending this as the process of biological development, seven years before Darwin published his famous The origin of species. Today he is remembered as a founding father of sociology. He concluded that "Civilisation is a part of nature, all of a piece with the development of the embryo or the unfolding of a flower," and saw the process that drives things forward and refines them to fulfil their function more and more efficiently is brute competition and the elimination of the weak. It is clear that scientists and religious people often see the world in different ways, they operate within different paradigms. Whereas scientists see the urge for survival as the only force shaping the way natural organisms are, religious people find it hard to accept that such amazing efficiency could be produced "by chance", particularly when it relies on incredible complexity and order and seems to produce a world that supports human beings and their finer abilities of reason, love, faith, creating and appreciating beauty.

Cicero – the universe's purpose and intelligence

Most versions of the design argument cite other patterns in the natural world, not just apparent fitness for purpose, as evidence for a divine designer. Cicero (c106-c43BC) presented an early version of the argument which is from order and complexity, qua regularity as well as qua purpose. He stated, "The divine power is to be found in a principle of reason that pervades the whole of nature” … “When you see a sundial or a water-clock, you see that it tells the time by design and not by chance. How then can you imagine that the universe as a whole is devoid of purpose and intelligence, when it embraces everything, including these artifacts themselves and their artificers?" This version of the argument could be seen as the direct antecedent of William Paley’s argument from analogy, the version of the design argument which most textbooks start with and which is most roundly mocked by critics, but it is also the version of the argument which inspired David Hume to put forward his criticisms of the argument in his posthumously published Dialogues concerning natural religion (1779).