Plato understood reality in metaphysical terms, the physical world of time, space and sense-experience being just a limited shadow of an unlimited noumenal reality beyond, which we can access through reason. For Plato reason is unique to human beings and language is the medium of reason. Human beings can grasp concepts without having to create them out of senseexperiences. Knowledge can be a priori, before experience. Words represent concepts in an absolute, static way. Plato suggested that language is innate and influenced most western philosophers in seeing that human beings are naturally distinct from other animals being given the "gift" of language and rational communication and comprehension, a unique way of grasping objective truth.

The uniqueness of humans

Plato influenced the dominant school of philosophy in Europe up to the eighteenth century, which developed thereafter into what we will call philosophical idealism; Descartes (pictured right) is famous for writing, "cogito ergo sum", "I think therefore I am". Human beings are characterised by the ability to think, and for thinking to occur, language is necessary. Animals, on the other hand, have no language, cannot think and are nothing but well-constructed, complex machines. In the Meditations (1637) he wrote: "For it is a very remarkable thing that there are no men, not even the insane, so dull and stupid that they cannot put words together in a manner to convey their thoughts. On the contrary, there is no other animal however perfect and fortunately situated it may be that can do the same. And this is not because they lack the organs, for we see that magpies and parrots can pronounce words as well as we can, and nevertheless cannot speak as we do, that is, in showing that they think what they are saying. On the other hand, even those men born deaf and dumb, lacking the organs which others make use of in speaking, and at least as badly off as the animals in this respect, usually invent for themselves some signs by which they make themselves understood. And this proves not merely animals have less reason than men but that they have none at all, for we see that very little is needed to talk."

In a 1646 letter to the Marquess of Newcastle, Descartes wrote "none of our external actions can show anyone who examines them that our body is not just a self-moving machine but contains a soul with thoughts, with the exception of words, or other signs that are relevant to particular topics without expressing any passion. I say words or other signs, because deaf-mutes use signs as we use spoken words; and I say that these signs must be relevant, to exclude the speech of parrots, without excluding the speech of madmen, which is relevant to particular topics even though it does not follow reason. I add also that these words or signs must not express any passion, to rule out not only cries of joy or sadness and the like, but also whatever can be taught by training to animals."

Descartes' idealism was rejected by John Locke and the empiricists at the time of the Enlightenment, again working on the basis of Aristotle (De Anima, Book III, Chapter 4). Their approach came to replace that which descended from Plato and developed into what we might call "philosophical realism". David Hume (1711-76, pictured left) took the empiricist approach to language forward, acknowledging that the meaning of terms is subjective and dependent on personal human experience, rather than being potentially objective. "It is experience only, which gives authority to human testimony; and it is the same experience, which assures us of the laws of Nature." He used the example of red light, noting that we see objects as red, but we know (as a result of scientific enquiry) that they just have a surface that is disposed to reflect light at a frequency which our eyes interpret as red. Ultimately all human understanding is based on sense-experience, and that is not as solid as it may appear. This approach to language had become mainstream by the end of the nineteenth century. Yet today it is being challenged in some quarters. 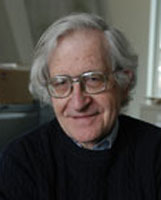 Noam Chomsky (b1928) is the most famous opponent of empiricist theories of language acquisition. He proposes instead a "generative" or "nativist" theory which cites evidence that human beings do not learn language in the way that animals do; they seem to be predisposed to acquire language even when they are not given much encouragement or stimulation to do so. Generative theory seems to suggest that human brains are "hardwired" for language, enabling children to understand verbal communication and engage in it quickly. This insight might be seen to relate to Plato's philosophy on one level. This approach is not universally accepted. Today, many writers propose theories which tread a middle line between the empiricist and nativist approaches, suggesting that language is acquired through a combination of natural predispositions and personal experiences, nature and nurture.