The pursuit of happiness as an aim has a long history. The ethics of the pre-Socratic philosopher Epicurus are a form of egoistic hedonism, i.e. he says that the only thing that is intrinsically valuable is one's own pleasure. Anything else that has value is valuable merely as a means to securing pleasure for oneself. However, Epicurus has a sophisticated and idiosyncratic view of the nature of pleasure, which leads him to recommend a virtuous, moderately ascetic life as the best means to securing pleasure. This contrasts Epicurus strongly with the Cyrenaics, a group of ancient hedonists who better fit the stereotype of hedonists as recommending a policy of "eat, drink and be merry".

Ethics based purely on human experience

Jeremy Bentham was the founder of modern utilitarianism. He called the idea of human rights "nonsense on stilts" and his attitude to rights philosophies was shared by his godson John Stuart Mill. Both men sought to take moral philosophy back to basics, back to what we can know from experience, and build from that a simple system to guide moral decision making, on both individual and societal levels. They rejected any assumptions or postulations that could not be supported by ordinary experience. Believing in the authority of religious values, the reality of God or an afterlife, the inequality of human beings or the existence of inherent "rights" was all deemed irrational. Ethics concerned how human beings should behave towards other human beings in this world, it should be guided by observation and measurable fact, not by prejudice, unfounded belief or wishful thinking.

Bentham began by observing that "nature has placed mankind under two sovereign masters, the pursuit of pleasure and the avoidance of pain". He noted that the ancient Greek philosopher Epicurus had come to this conclusion, one which was still held to in the nineteenth century; it chimed with ordinary human experience. From the observation that human beings do seek pleasure, Bentham then moved to argue that they should seek pleasure, that such was natural to them. The utilitarian maxim he devised exhorted people to "always act so as to produce the greatest happiness for the greatest number". Bentham moved another step in arguing that people should seek to maximise pleasure for people in general, rather than just for themselves.

In fact, utilitarianism is radically different from the hedonism or egoism that the foundational observations of people's pleasure-seeking characters might suggest because some decisions which maximise the number of people made happy would make the decision-maker very unhappy. For example, a couple are in love but one is married with children. The hedonist might have an affair or even divorce. The utilitarian, on the other hand, must weigh up the pleasure and pain caused to all the people involved and, on balance, would probably have to walk away. High standards of rationality and altruism are expected of the utilitarian and it is just wrong to reject the system as one that just panders to baser human desires and enables us to justify doing as we please.

Bentham immediately saw the difficulty with using the utilitarian maxim as the basis for a normative approach to ethical decision-making. How could pleasure be quantified effectively, let alone ranked according to quality? The measurement of pleasure, pain, happiness or sadness is incredibly difficult and Bentham was aware of this. He suggested various criteria for assessing pleasures. In one essay he listed seven criteria by which to evaluate pleasure produced by an action, namely:

• extent (the number of people affected)
• duration (how long it lasts)
• purity (does pleasure depend on pain in some way?)
• fecundity (the likelihood of producing further pleasures),
• intensity (how strong a sensation)
• nearness / remoteness (how close at hand it is)
• certainty (is it definitely going to be this way?)

Unusually for his time Bentham argued that "Prejudice apart, the game of push-pin is of equal value with the arts and sciences of music and poetry." In other words, pleasures from any source can be assessed side by side and "intellectual pleasures" for example should not be counted as inherently superior to a children's game. This meant that Bentham's utilitarianism was egalitarian; people from any social class, race, religion or gender could be counted as equals before his calculations.

The problem with Bentham's system was the problem that has always dogged another egalitarian system: democracy. It tended to level down rather than level up; in other words it was easily prepared to sacrifice rare and extraordinary pleasures if it meant a small increase in the everyday pleasures of a majority of people.

An example from state-funded education 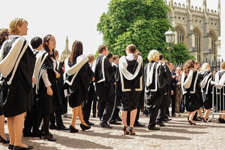 Think about universities. They are elitist and expensive; not everybody gets to go to one, let alone for very long, and yet they have been, until now, paid for out of everybody's taxes, regardless of the benefit taxpayers do or don't receive. Bentham might argue that those who want to go to university should pay the full cost themselves and that public money should go on projects which benefit more people, for example on schools. That is, it is better that 100 per cent of people have a good primary education than that 35 per cent of people can study at university.

This argument is familiar. In cutting spending, Western governments aim to minimise pain rather than to maximise pleasure - but the effects are the same and so are the calculations. Bentham devised a "hedonic calculus" to expedite decision-making and it would be surprising if some version of it is not being used in every government department today.

Of course, the business of assigning values to the pleasure or pain caused by any course of action is difficult, and further, it is always tricky to know how many people will be affected by a decision and how wide the assessment should be. Nevertheless, by using research coupled with the criteria outlined above, it will be possible to provide a defensible rationale to underpin decision-making. Once various courses of action have been scored it is even relatively easy to make "objective" comparisons.