Over the centuries a large number of philosophers and theologians have tried to argue that God's existence is somehow necessary. Descartes argued that the mere fact that we can talk about a supremely perfect being implies that that being exists, because perfection and existence somehow go together. Others such as Kant reject this kind of 'ontological' argument on the grounds that 'existence' is not a property of something in the way that, say, redness is. Yet the ontological argument is still explored – partly, some say, more as a meditation than a purely philosophical exercise.

There is only one major argument for God's existence that is a priori, deductive, and that was called the Ontological Argument by Immanuel Kant, though several versions of it predated Kant by centuries.

St Anselm – anybody who doubts God's real existence is a fool

The origins of the Ontological Argument are usually seen in the writings of St Anselm of Canterbury. Anselm's "argument" in Proslogion 2 was a reflection or prayer rather than a formal piece of philosophy. He tightened up his thoughts in two developed arguments found in the Monologion (written before the Proslogion, though it did not appear until later) and Proslogion 3. In Proslogion 2, Anselm began with a quotation from Psalm 14:1 ("The fool says in his heart, 'There is no God'... ), and then reflected on its truthfulness. Anselm defined God "aliquid quo nihil maius cogitari possit", or that than which no greater can be conceived. This a priori being accepted, he observes that anybody who doubts God's real existence is a fool; it is always greater to exist in reality (in re) than just in the mind (in intellectu) [this claim is often discussed in terms of the relationship between formal and intentional existence]. The doubter must have a concept of God in the mind to doubt or reject. If the concept of God is that of the greatest conceivable being it must be of a formally, really existing being. For Anselm, the doubter is essentially saying "God, who exists, does not exist" – they are asserting a straight contradiction.

The word "ontological" was first used to describe deductive, analytic arguments for the existence of God by Kant in the Critique of pure reason. The word "ontological" is derived from ontos, the present participle of the Greek verb einai to be; it literally means "being", so the argument is that God's existence follows from the nature of being, existence, itself. There are many ontological arguments, some more sophisticated than others, but they share the characteristics of being deductive, analytic, and a priori or propter quid arguments. They attempt to demonstrate that existence is part of God's nature or being and do not depend on observations.

Gaunilo's riposte 'on behalf of the fool' 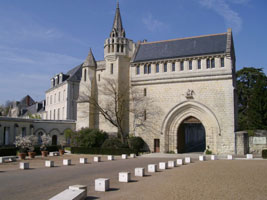 The simple argument in Proslogion 2 was reduced to absurdity by Anselm's fellow Benedictine, Gaunilo, in a witty reposte entitled Liber pro Insipiente or "On behalf of the fool". Gaunilo ignored the fact that Anselm had already published a tighter version of the argument in Proslogion 3 and focused on the claim that God's nature as the greatest conceivable being must include existence. He used the example of a perfect island, observing that if a man should try to prove to me by such reasoning that this perfect island truly exists, "either I should believe that he was jesting, or I know not which I ought to regard as the greater fool: myself, supposing that I should allow this proof; or him, if he should suppose that he had established with any certainty the existence of this island."

Gaunilo suggested that the ontological argument, if it is to work in proving God's existence, should also prove the existence of all other perfect things - islands, women, unicorns – which we all know don't exist in the real world. To put it simply, no amount of believing or arguing is going to change the fact that when you get to your paradise island there will be cockroaches in the bathroom and nothing you can say about the love of your life will stop her from aging, having PMT and occasionally nagging about leaving the loo seat up!

Anselm's next move – the necessary existence of God

St Thomas Aquinas argued that God's de re necessity could be demonstrated through inductive natural theology but that God's de dicto necessity could never be known in this life. He observed that all ontological arguments depend on an a priori definition of God which he felt to be impossible. For Aquinas all claims about God are analogical – they share some meaning with similar claims made about created things but should not be understood to be univocal. We can move from experience to the conclusion that God exists and from that conclusion to making claims about the nature of his existence as a necessary being - but the sense of our understanding of God's nature is too limited to allow for a definition to be analysed for a de dicto proof of His existence. Aquinas denied the univocal use of language which Anselm's proof assumed - and thus undermined the ontological approach to proving God's existence. As he wrote "Because we do not know the essence of God, the proposition ‘God exists' is not self-evident to us." Aquinas objected to the whole idea of a deductive ontological argument for God because this type of argument starts with a definition which can then be analysed – something which is not possible in the case of God. 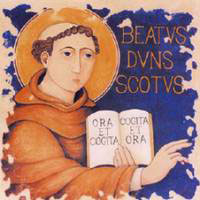 John Duns Scotus agreed with Aquinas that we can only prove the existence of God by an argument quia (from effect to cause) and not by an argument propter quid (from essence to characteristic) and further that we cannot know the full nature of God in this life. Scotus was more positive about the possibility of defining God univocally though and does not subscribe to Aquinas' doctrine of analogy. Scotus' concept of God is framed in language based on temporal experience. But as this experience derives from God, and we must thus be able to talk about him as a result of experience, our language must be applicable to God. Scotus works from a distinctive definition of God as an infinite being. He argued that this is a much better way of understanding God's nature than the Thomist definition of God as wholly simple. Aquinas' definition is negative – God is not bounded by the limited contingencies of time and space. Scotus' definition is positive – God possesses all pure perfections, all those qualities which are better to have than not, in infinite degree, as an infinite being.