The theories of Ludwig Wittgenstein 1889-1951 have had an enormous influence on modern theories of language and, more broadly, on theories of truth, knowledge and reality. He came from a family of wealthy secular Viennese Jews. He was not considered intelligent as a boy and was sent to technical school – where a class-mate was Adolf Hitler. When he left school Wittgenstein travelled to Manchester to study aeronautical engineering, but "found philosophy" and philosophy found him just before World War I, when he walked into the rooms of GE Moore at Trinity Hall, Cambridge. The college soon took him on to the staff, though he hadn't even got a degree. 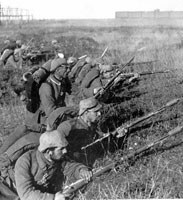 Although an awkward and silent man, Wittgenstein was obsessed by communication. Could words have a static relationship with concepts? Could meaning be definite? Wittgenstein went back to Austria at the outbreak of war in 1914 and enlisted as a private soldier, serving on a river battleship on the Eastern Front. He served alongside men from all corners of the Austro-Hungarian Empire, men with very different educations, experiences and cultures from his own. He found that although they could all talk, in German, they could not communicate effectively. Words carried different meanings for different people, depending on their "form of life". Wittgenstein later used the analogy of a game to explain this. The meaning of words and phrases depends on all the people communicating knowing the "rules of the game" - if some people play by different rules or are ignorant of the rules then miscommunications will ensue. This is known as Wittgenstein's theory of "language games".

Back in Cambridge after the war, Wittgenstein lectured a generation of philosophy students (including Elizabeth Anscombe and Norman Malcolm) and encouraged them to question the nature of the link between language and meaning and to consider the implications of objective truth being beyond the reach of our subjective tongues. The idea that what is true or what is meant by a statement in one "form of life" might be different from what is true or meant by a statement in another began to be accepted. Think about it; if a New York Gangster says that something is "wicked" he might mean something different from the Revd Peabody, when he says something is "wicked". You might mean something different when you call someone "gay" to your grandmother, than when she uses the term. It would be wrong to say that anybody in these examples is mistaken in their use of words, but the meaning of those words clearly depends on the cultural context in which they are used.

In the 1980s sticky packing tape was marketed in Australia under the brand name Durex. When Australians visiting Britain went to the stationers asking for Durex to seal a parcel they were not intending to cause a lot of laughter, but the different connotations of "Durex" in the UK made sure that a lot of laughter ensued. Words, even in the same language, do not seem to have a static relationship with the things or situations that they refer to. The relationships seem to be "culturally relative". The question is; if language and meaning is culturally relative and language is the only medium for describing and communicating about truth, is truth culturally relative? Can there be an absolute truth beyond all the linguistic confusion?