People have always interpreted scripture. It is rarely instantly clear what the significance of a religious text is and how it should be applied to the everyday life of a believer. 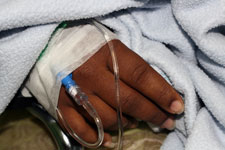 Take, for example, the sixth of the Ten Commandments, "thou shalt not murder" (Exodus 20:13). It seems unequivocal. But now consider a case of switching off the life-support of a patient who is severely brain damaged, or the case of what to do with a seven-day-old embryo, created in-vitro but not needed for re-implantation.

Is it clear that the sixth commandment would mean that all good Jews and Christians would keep brain-dead patients alive, on ventilators, with antibiotics and feeding tubes at a cost of at least several thousand pounds per day until something happens to cause their "natural" ie non-intentional death? Is it clear that the sixth commandment would prohibit doctors from doing anything to a seven-day-old embryo that they would not do to a baby or to an adult? Would freezing it in liquid nitrogen be murder? How about extracting cells to be used for stem-cell experimentation?

Of course, the embryo has properties that babies and adults do not. Early embryos can survive being frozen for years, going on to be implanted and then to develop into a baby. Extracting several cells may leave the early embryo unlikely to develop, whereas extracting adult stem-cells (from bone marrow for example) is a relatively non-invasive, and certainly not life-threatening.

The complexities of life mean that even the clearest teaching has to be interpreted and more specific regulations have to be derived either from the perceived "spirit" of the text (for example, looking for how elderly and sick people are treated in another part of the Scripture to see whether the commandment would have been meant to put the sanctity of life ahead of the quality of life in such circumstances) or from some other overarching system or authority (such as how the commandment fits in with other teachings, or with a system of moral philosophy such as natural moral law).

Looking for the broader spirit of the text is the first step in biblical criticism. It involves, first of all, considering the use of words. Where else, for example, is the word "murder" used and in what contexts? Could the other uses of the word shed light on the sense in which murder should be understood in the commandment? Is the author of the commandments the same author as that of the other texts that the commandment is being compared with? Were the authors at least likely to have been contemporaries, and so using language in broadly the same way? Are there any signs that the text may have been translated from another language or copied from another source? Can the nature of the text shed any light on the purpose, date or origin of the text? These are all questions asked by the biblical critic.

The most basic form of criticism is textual criticism. Textual critics will compare various manuscripts and otherwise look for evidence of changes, additions or omissions in the text, always trying to work out what the original (called the "archetype") would have said. Before the invention of the printing press, books were copied by hand and, scribes being human, texts gradually altered with time. For example, when copying something out by hand it is easy to let one's eye skip between lines when they begin or end in the same way. Also, when something in the source-text reads awkwardly or as if a word or phrase is missing then it is natural for the scribe to insert words to compensate. The textual critic looks for evidence of changes such as this and then either tries to reconstruct the original text using portions of an eclectic range of manuscripts, each judged likely to be original, or to justify a choice of the best available manuscript.

Textual criticism has its origins in work done by editors and translators of the Bible. Scholars such as Johann Albrecht Bengel (1687-1752), Johann Jakob Griesbach (1745-1812), Brooke Wescott (1825-1901) - an Anglican bishop - and Fenton JA Hort (1828-92, pictured above) developed a series of rules for textual criticism which are still in use. Bengel argued that the harder reading is to be preferred - that is, that scribes have a tendency to explain or simplify a text, making it easier to read, rather than more difficult, therefore a text that is difficult or awkward is more likely to be original. Griesbach suggested that the shorter reading is to be preferred, that is that scribes are more likely to add than delete and that a concise text is more likely to be original. Westcott and Hort suggested that quality of witnesses to a text is more important than quantity, and that the line of transmission must be considered when trying to identify an original text – and that a text which best explains the existence of the other texts and their variations is most likely to be original.

Searching for an original text

Some textual critics try to reconstruct the "family tree" of all the remaining manuscripts of a text, showing how each related to others and in this way arguing that one manuscript should be accepted as the original. This approach is known as stemmatics. Although it is still in use and allows translators of the Bible to defend their choice of a "best text" on which to base their work, it has been criticised for more than a century because it depends so heavily on conjecture.

Textual criticism has been applied to many ancient texts - the works of Shakespeare, the writings of Classical authors and in recent years, even the Qur'an. The work of Gerd Puin on the manuscript fragments of the Qur'an found in 1972 in Sana'a, Yemen, is most associated with the textual criticism of the Qur'an. Textual criticism seeks to clarify the original meaning of a text and eliminate the human detritus it has picked up through handling and transmission. It is more conservation than restoration and, as such, it is within the bounds of acceptable practice for some Muslim scholars and for conservative Jewish and Christian scholars, except for a few highly conservative literalists (for example, Gail Riplinger and Peter Ruckman) who argue that Psalm 12:6-7 renders all study of the text futile, because God's grace will ensure that it remains uncorrupted in whatever form it is transmitted:

6 And the words of the LORD are flawless,
like silver purified in a crucible,
like gold refined seven times.
7 You, LORD, will keep the needy safe
and will protect us forever from the wicked

Textual criticism and the gospels

As applied to the Bible, textual criticism has suggested that there may never have been a single archetypal gospel text. The sheer number of differences between manuscripts, of textual evidences of alterations, omissions and additions and signs of different authors' hands indicate that the gospel texts were the products of years of development, much of which took place in various communities far removed in time and place from the subject-matter of the gospel records. Specifically, textual criticism has raised questions over the status of the ending of Mark's Gospel (chapter 16), the status of the fourth gospel account of the woman taken in adultery (John 7:53-8:11) and over the references in Luke's passion narrative to Jesus sweating blood and in 1 Corinthians to women being silent in church.