Student Zone
Philosophy of religion » The problem of evil » Theodicies

God as either not powerful, not aware or not loving

The first approach has been taken by various different scholars. Some, from John Stuart Mill to Jürgen Moltmann, have suggested that the only acceptable way to defend God against charges of creating or 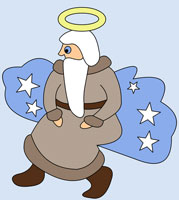 allowing evil and suffering is to argue that there are limits to his power. This leaves God knowing about and understanding our suffering and wishing to do everything possible to ameliorate our situation – but being effectively impotent. For others this God would not be worthy of worship. They prefer to argue that God could act but does not do so either because he does not know about our suffering (as the little-known Socinian Movement suggested) or that God's goodness is more akin to justice than love for humanity. This approach was popular with some Jewish scholars after the Holocaust but has not been popular with Christians, who have more of an interest in defending God's loving, forgiving nature.

St Thomas Aquinas suceeded in maintaining the principle of God's perfection by redefining the concept of God. If God is wholly simple, beyond time and space, then the meaning of labels such as "omnipotent", "omniscient" and "omnibenevolent" is only analogous, "univocal" or literal. For God to be timelessly good does not involve moral choices or preferring humanity to other species, let alone some people over others. For Aquinas, God's goodness means just that God is fully actual, being all that God can be. His power is just in being responsible for creation and his knowledge in having defined that creation. There is, for Aquinas, no question of there being any inconsistency or irrationality in believing in the perfection of God and the existence of evil – though to be safe Aquinas, like St Augustine, chooses to define evil as a lack, a negative quality, rather than ascribing to it any positive nature. Aquinas therefore adopts the second and fourth approach as well as the first.

A moral explanation for the existence of evil

The third approach, theodicies suggesting that there is a morally sufficient reason for a perfect God to have created or allowed evil and suffering, are probably the most numerous. Most famously, St Augustine proposed several reasons why a good God would have allowed evil (which he defined as a privation of good) and the suffering it causes. These reasons ranged from God allowing it so that we could better appreciate goodness and come to understand his power to God allowing it so that we can be free and responsible, thus earning salvation. The "free-will defence" which formed a small part of Augustine's thinking on the problem of evil and suffering has come to be the focus of many later scholars' theodicies. The reformed epistemologist Alvin Plantinga is associated with the most recent developed formulation of this, an argument which concludes that Hume and Mackie were wrong to label belief inconsistent or irrational (the fourth approach).

Since the 1960s there has been a resurgence of interest in the primitive theodicy put forward by St Irenaeus of Lyons in the second century AD. John Hick, in his important work Evil and the God of Love surveyed the state of theodicy and concluded that the best approach to resolving the problem of evil and suffering as it impacted on real people was to build on Irenaeus' suggestion that God allows or even creates evil and consequently opportunities for suffering so that people may develop from God's image into his true likeness. Hick calls this process "soul-making". As Richard Swinburne has observed, it is possible to understand how a loving God, like a loving parent, may allow child-like people to suffer that they may learn and grow into their potential.

This Irenaean approach does, however, beg questions over the inequality of opportunities. Why do some chidren suffer so horrendously and die well before they have any opportunity to grow from the experience? Why is there a need for such extreme evil when people could develop after experiencing much more moderate suffering? The degree of evil and suffering in the world is the focus of many recent attempts at theodicy, from scholars such as Roderick Chisholm and Marilyn McCord Adams in particular. The extent of suffering has also been highlighted by "protest atheists", who argue that attempts to justify God for creating or allowing it are basically tasteless. In fiction characters from Dostoevsky's Ivan Karamazov to Hardy's Jude and Greene's Bendrix stand in judgement and condemn God, suggesting him to be unworthy of worship because of the horrors he permits for no clear benefit.

There are those who remind us that we are in no position to know the mind of God. However inscrutible are the reasons for allowing horrendous innocent suffering, God may have them and we cannot judge as the full facts are hidden from us. In the Old Testament, Job drew such a conclusion after a long time of wrestling with the injustice that he was forced to bear, as did Fr Paneloux in Camus' The Plague. Interestingly Immanuel Kant wrestled with the existence of injustice in the world and concluded that it was the human lot to carry on believing that God is good and his creation fair, despite having no evidence to support that belief: living in hope despite the situation seeming hopeless, and having no reasonable expectation.

Such, perhaps, is the nature of faith. While few would accept Tertullian's assertion that faith is only faith when it is in the impossible, experiencing the existence of evil and suffering makes it difficult to see faith as an entirely rational response to creation. The business of theodicy is unlikely to yield results but, it seems, efforts are just as unlikely to cease.