The Catholic Church's insistence that faith can be supported by evidence and argument has been rejected by atheists – and some believers. The former see faith as somehow weak-minded, while the latter sometimes argue that verifiability would destroy religion by undermining the need for faith. Some thinkers aim to show simply that faith is at least rational, even if what we have faith in cannot be finally proved; others base their faith on convincing personal experience, while others still discover faith through a sense of despair in the face of a world that rejects it.

In modern Western society, faith is often labelled anti-intellectual. The 2006 documentary aired on Channel 4 Religion: The Root of all Evil? made the point that religious people often believe things that are difficult to prove through scientific evidence – or even things which contradict scientific evidence. Richard Dawkins argued persuasively that faith is like a virus which attacks the young and damages their ability to think clearly and critically. Proponents of the radically secular scientific worldview would agree with his view; they assume an evidentialist position and dismiss the possibility that faith could be supported in any way.

Faith has not always been seen as opposed to rational argument, however. The basic belief in a necessary creator, a prime mover and uncaused causer, was supported through inductive argument by Aristotle and later by Aquinas. Aquinas’ five ways to God (click here) all start with empirically verifiable observations of laws of the natural world and then seek to provide a logical conclusion which would explain them. Scientists use the same method, though they have suggested different conclusions.

Aquinas’ cosmological argument points to a God who is the prime mover, the first cause, the de re necessary being which supports a contingent universe. He starts by observing that all things move, change and are contingent and goes on to argue that a being that is not like anything else, a being that is unmoved, uncaused and not contingent, must exist if all other things are to be explained. This being cannot rightly be seen as a thing but it has a demonstrable effect in enabling all other things, so it is not nothing either (as Aquinas observes and scientists would agree, something cannot come from nothing). The "neither something nor nothing" is, Aquinas asserts, "what everybody calls God". Aquinas and the Catholic Church, which accepted his doctrine as foundational at the Council of Trent, challenge the claim that religious faith cannot be supported through evidence and argument.

Removing the need for a creator

A major logical objection to Aquinas’ conclusion was framed by the philosophers Hume and Kant. Hume asked, "Why cannot the universe itself be the cause?" and Kant noted that as there is no evidence of a de re necessary being within our frame of reference, to speak of one would be a "cupola of judgment". Aquinas’ appeal to another category of existence, something outside the universe (which Wittgenstein defined as "all that is"), may be an illogical conclusion, an inappropriate explanation for the features that he observed. Aquinas would not be the first scholar to develop a false a posteriori conclusion. Scientists have at various times argued that empirical evidence supports the idea that the moon was once part of the pacific ocean bed, that we are quickly entering another ice age and that cholera is not water-borne.

The view that the universe was self-causing or infinite was prevalent in science until the 1960s – like Hume and Kant, scientists saw no reason to conclude that natural processes must be explained by a "neither something or nothing" of any kind. The work of Stephen Hawking and Penrose changed the consensus in scientific understandings of the state of the universe however. Their evidence, supporting a Big Bang theory and thus undermining the Steady State approach (doggedly promoted by Hoyle until his death), indicated that the universe is expanding and thus must have started at a "singularity" – a point where time space, matter and energy conflate. The existence of a singularity is rendered impossible by the laws of conventional physics – but those laws are only supported by the inductive observation of processes in relation to so called constants, constants which were demonstrated to be in fact relative by Einstein. Penrose and Hawking enabled science to develop in a new direction allowing for, even necessitating the postulation of a de re necessary category of existence.

Scholars such as Polkinghorne have observed that the rational argument for a necessary God and that supporting the Big Bang theory share both inductive observations and a similar conclusion. It may then be possible to say that accepting the existence of a necessary God is an inevitable consequence of reasoned argument about the origins of the world. Even Hawking once observed that if the "neither something nor nothing" that caused the universe could be called God then so be it – God exists. 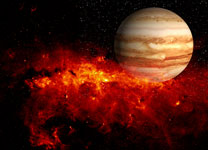 Even if his argument supports belief in a creator that is "neither something nor nothing", Aquinas’ conclusion, that this is "what everybody calls God" could not be more controversial. Through the Summa, Aquinas attempts to reconcile the characteristics of a necessary being with those of the conventional Christian God. He shows that the necessary being could be analogously described as the creator, all powerful and all good. He demonstrates the possibility of such a being creating a universe that contains evil, effecting miracles and responding to prayer. He even describes how an afterlife with god in the "beatific vision" could be conceived of. Aquinas does not though describe how the being that he has, through rational argument, shown to exist could be the object of Christian faith. It seems that even if belief in the existence of God may be supported through reasoned argument, religious faith may not be.