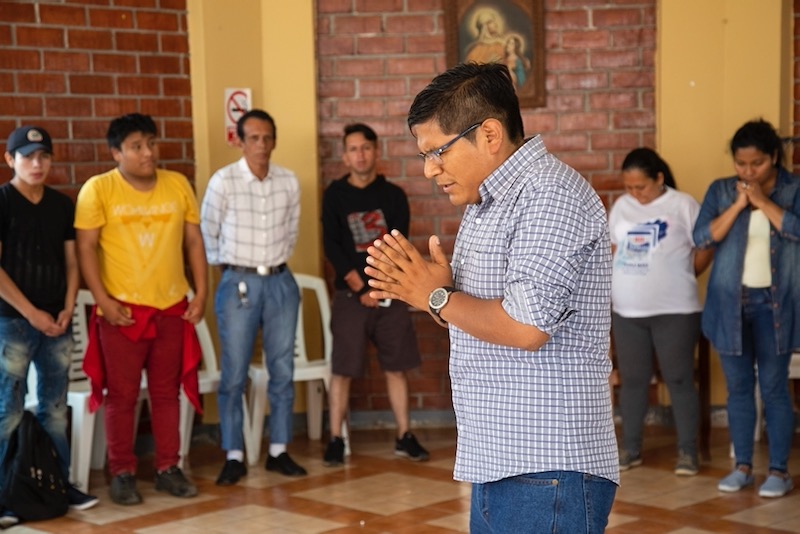 Abraham Luque, a catechist from the Scalabrinian Parish of Our Lady of the Perpetual Help, prays during a Christmas event at the Scalabrini welcome center in Lima, Peru.
CNS photo/Oscar Durand

The Vatican says that men and women who take on the role of “catechists” are “co-responsible” with clergy for the Church’s mission and can take on the “pastoral care” of a parish when there is a shortage of priests.

Earlier this year, Pope Francis established the new lay ministry of “catechist”, which gives official recognition to a number of tasks carried out by Catholics in parishes across the world. These include teaching the Christian faith and other forms of service.

The Congregation for Divine Worship and the Discipline of the Sacraments has now published a liturgical rite for installing catechists, including guidelines setting out what the role entails.

Archbishop Arthur Roche, Prefect of the congregation, has written to bishops explaining that catechists “are called to be co-responsible in the local Church for the proclamation and transmission of the faith, carrying out this role in collaboration with the ordained ministers and under their guidance”.

This includes “guiding community prayer, especially the Sunday liturgy in the absence of a priest or deacon” and “assisting the sick; leading funeral celebrations; training and guiding other Catechists; coordinating pastoral initiatives; human promotion according to the Church’s social doctrine; helping the poor; fostering the relationship between the community and the ordained ministers”.

The British archbishop points out that when there is a “lack of a stable presence of ordained ministers”, catechists can help lead parishes something which is already envisioned by the Church’s law.

The Code of Canon Law, the archbishop writes, already “provides for the possibility of entrusting to a non-ordained person a share in the exercise of pastoral care in a parish, always under the moderation of a priest”.

But he emphasised that the role of a catechist is a distinctly lay ministry and is not a “substitute for the priest or deacon”. Students for the priesthood or diaconate should also not be instituted into the catechist role.

There are thousands of catechists volunteering as teachers in parishes where they play a vital role in transmitting the faith to the next generation and are often tasked with preparing children for first communion or confirmation. In other parts of the world, including in the Amazon, Asia and parts of Africa, and particularly in places where there is a priest shortage, catechists acts as the leaders of local parish communities.

Archbishop Roche said that it is up to the “discernment of the Bishops” to decide how best to use catechists and that this will vary according to local contexts while candidates should undergo a period of training before being instituted into the role.

When he instituted the ministry of the catechist, Francis explained that he was rediscovering the tradition of the early Christian community which was “characterised by many different forms of ministry carried out by men and women who, obedient to the working of the Holy Spirit, devoted their lives to the building up of the Church”.

Over the 2,000 years of Christian history, the Pope added, many “lay men and women” helped to “spread of the Gospel through catechetical instruction”.

The role of catechist also came after he formally opened the role of acolyte and lector (altar server and reader) to women, and shows his focus on building up lay ministries which are distinct from the ordained priesthood.