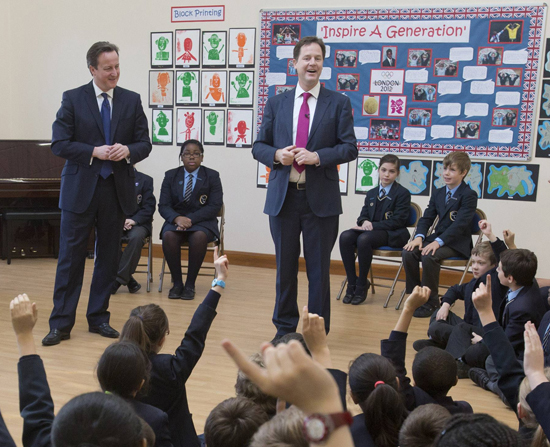 In the last election I voted Liberal Democrats, partly because the local candidate was considered a decent bloke, and partly because we all knew that voting Lib-Dem was how you kept the Tories out. (We all know what happened next.)

As someone brought up to value participating in democracy, I felt stuck after 2010. I couldn't vote Labour, after two illegal wars. I could never again vote Lib-Dem once they supported £9,000-a-year tuition fees – the 30 pieces of silver they took to enter Government; and I couldn't vote Tory as their ideology is too oppressive of the poor and too abusive of the powerless.

This May I will vote Labour for the first time. I haven't forgotten the past but the idea of another five years like the last five terrifies me. We've had to listen to the Prime Minister declaring himself a Christian and claim the Big Society was invented by Jesus, while watching working people slide into poverty, the number of food banks exploding, and the Lobbying Bill, also known as the Gagging Bill, silence the Government’s critics in the charitable sector. The myth of austerity has been forced down our throats by an elitist Eton clique whose record shows them to be either incompetent, or indifferent to the suffering they cause.

I'm having to contribute this article under a pseudonym since as a civil servant I have had several threats of disciplinary action from my manager for sharing articles about the issues of child poverty, homelessness, and social justice on my personal Facebook page because they "may be seen as critical of the Government". Suddenly, giving food to the starving and clothes to the naked is not acceptable idea to share with one's friends!

In the last two years we have seen the radical message of our faith proclaimed anew by Pope Francis; we are being called in unequivocal terms to be a Church for the poor. Yet as a country we have become a nation that grants tax dodges (vanilla and various other flavours) to the rich, while privatising public services and forcing young people on to zero-hour contracts – and encouraging even a woman in a coma to find work. Money is found for vans threatening migrants with deportation, while support for the search and rescue operation Mare Nostrum, to save those drowning in the Mediterranean, is cut as the Tories run scared of Nigel Farage, the Pound-Shop Enoch Powell running Ukip.

I don't think Labour has all the answers, nor does it have the courage to create a real socialist democracy that my faith compels me to believe in. But it looks like the best chance to prevent a Tory, or worse, Tory-Ukip coalition from devastating our country even further. As a Christian I cannot face our society abandoning every moral our Church taught me for another five years, and creating one in which none but the wealthy are valued.

Above: David Cameron and Nick Clegg during a visit to a Catholic school. Photo: CNS/Reuters

Tall bloke- I'm not sure why the Labour Party is more 'paedophile enabling' than any other party, particularly in light of the recent historical cases and the move to maintain anonymity suggested recently.

I could never vote Labour because of their record on child abuse, to me they do not seem to care about our young people at all. If you are so anti UKIP and The Tories then at least vote Green; not the paedophile enabling party.