In September 2018, the Pope met senior US bishops and Mgr Bransfield in the Vatican. 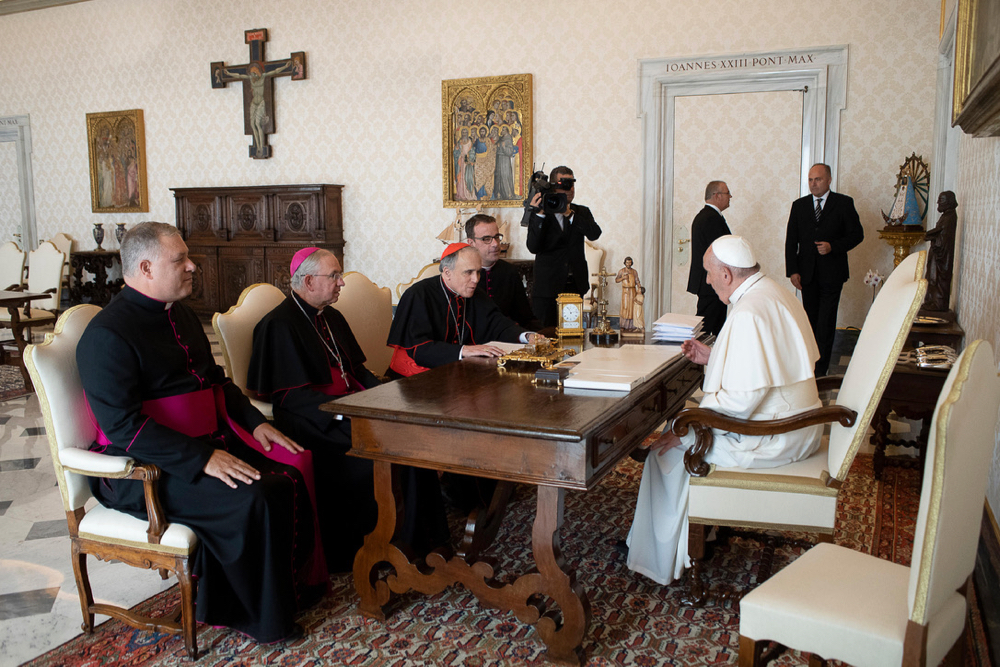 Pope Francis meets with representatives of the U.S. Conference of Catholic Bishops at the Vatican Sept. 13. 2018
CNS photo/Vatican Media

Church officials in the United States drew up a secret plan to judge bishops on abuse which they hoped Pope Francis and the Vatican would accept as a "fait accompli", a new book reveals.

Mgr Brian Bransfield, the General Secretary of the US Bishops’ Conference, and Mgr Ronny Jenkins, the Dean of Canon Law at the Catholic University of America drew up proposals for a code of conduct for bishops and lay-led commissions to judge them.

The proposals were designed as badly-needed reforms to rebuild the Church's battered credibility. However, when studied in Rome, it was decided they breached long-standing Catholic laws and traditions stating bishops can be judged only by the Pope.

In “Wounded Shepherd”, a new book on the Francis pontificate, Austen Ivereigh argues the more troubling feature of the Bransfield-Jennings plan was the attempt to carry out an ecclesiastical power play against the Pope in what was a quick-fix solution attempting to shore up the US bishops’ reputations.

“It was poor law, drawn up in haste for public relations purposes and more reflective of a punitive American juridical and corporate culture than a Catholic one,” writes Ivereigh. “Even more shocking was [the plan] to deliberately exclude Rome from the design of the proposal.”

One Church source told the author that “their strategy was to confront the Pope with a fait accompli…They were thinking ‘if this passes, what’s Rome going to do? Reject it? Their concern was to look as if they had done something, and if Rome objected, that would make Rome look bad.”

In the end, the Vatican got hold of the details of the plan and asked the US bishops not to vote on any proposals at their meeting last November. On 12 November 2018, Cardinal Daniel DiNardo stunned the gathering at Baltimore by telling the bishops they had been ordered by the Vatican not to vote on the proposal. It led to fierce criticism of the Holy See from abuse survivors and advocates.

Ivereigh, who wrote the respected biography of Francis, “The Great Reformer”, is a long-time Catholic commentator, a former deputy editor of The Tablet and an expert in the Latin American church. He had access to senior officials in the course of writing his latest book.

He reports on details of a September 2018 meeting between the Pope and senior US bishops and Mgr Bransfield in the Vatican.

It took place in the aftermath of a torrid summer of abuse where revelations that former cardinal, Theodore McCarrick, had been an abuser, and the release of a 26 August dossier by Archbishop Carlo Mario Viganò, the former Holy See Ambassador to the US, calling on Francis to resign. Archbishop Viganò claims he told the Pope that McCarrick had been sexually abusing seminarians.

Ivereigh writes that Cardinal DiNardo, the President of the Bishops’ Conference, wanted a Holy See-led inquiry into McCarrick in an attempt to rebuild trust and credibility.

Instead, they were told by Francis: “You lack credibility because you are divided.” He advised them to cancel their November 2018 meeting and hold a retreat instead. This would, the Pope told them, show the Catholic people that they were “placing themselves in God’s hands”, and help rebuild trust.

Cardinal DiNardo refused to follow Francis’ advice, although the bishops did hold the retreat in January 2019.

The details in Ivereigh’s book reveal the tensions between the Holy See and the United States under the Francis papacy. The book comes as bishops from the US arrive in Rome for “Ad Limina” group meetings with the Pope, and prepare for their Baltimore meeting which starts on Monday 11 November.

At the end of last year, the Associated Press reported on a letter that the Vatican had been kept in the dark about the US’ bishops abuse plan until four days before the vote, while the Pope has suggested the thinking in the US has been too much like that of a self-governing congregationalist church.

Ivereigh’s book details the reforms of the Francis papacy, along with documenting the opposition the Pope has faced. The author says the pontificate has become a place of “spiritual combat”.

Much of the resistance to Francis, he says, comes from closed circle, ecclesial elites including in the United States. The book reports that Mgr Bransfield and Mgr Jenkins were so close they were nicknamed “Bronny" and their plan became known as the Bronny proposal.

In 2018, the university campus was used for the launch of the “Red Hat Report”, a plan to delve into cardinals' sexual orientation and edit Wikipedia entries to link them to scandals. The aim is to try and influence a future conclave and prevent a repeat of the another prelate in the mould of Francis, elected in 2013.