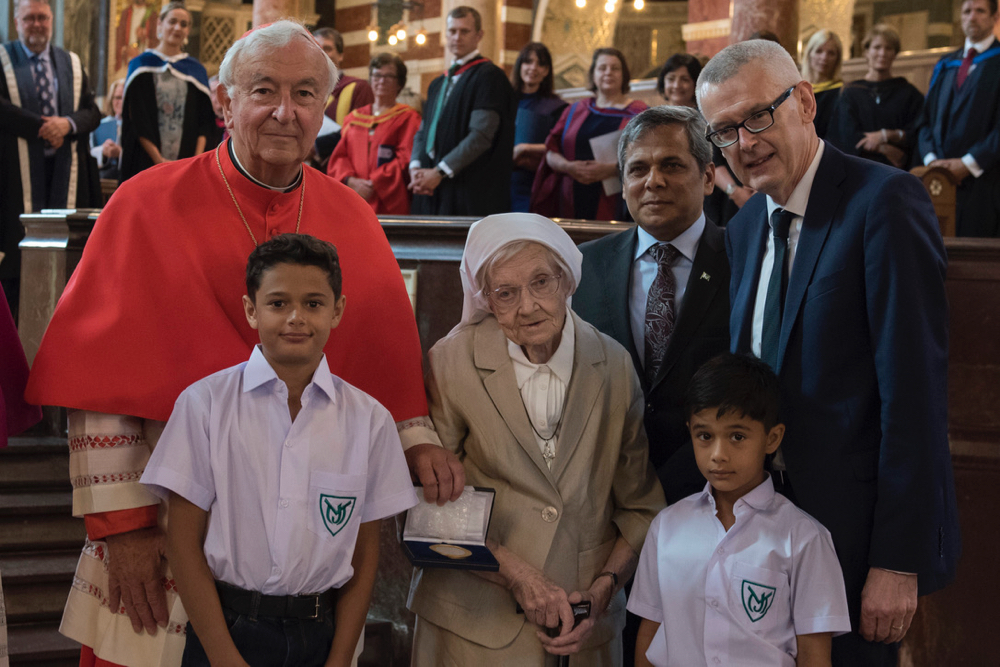 Sr Berchmans with the Archbishop of Westminster, Cardinal Vincent Nichols, on receipt of the Benedict Medal
St Mary's University

An Irish nun has been awarded the Benedict medal by St Mary’s University, Twickenham, in recognition of her work teaching and promoting interfaith relations in Pakistan.

The medal was presented to Sr Berchmans Conway by the Archbishop of Westminster and Chancellor of St Mary’s, Cardinal Vincent Nichols, at the university’s summer graduation ceremony at Westminster Cathedral.

Sr Berchmans, born Bernadette Conway in 1929 in County Clare, joined the Congregation of the Religious of Jesus and Mary in 1951. The congregation, dedicated to caring for and educating the young and homeless, also focused on education in other countries. The first convent of Jesus and Mary in Pakistan was opened by four sisters in Lahore in 1876. Sr Berchmans was sent to Pakistan in 1953, aged 24.

The award is in recognition of her almost 70 years of teaching, most of which was spent in Pakistan, where she taught Muslim, Christian, Parsi and Hindu children at the convents of Jesus and Mary in Lahore and later in Murree and Karachi.

In 2012, while she was Principal of the convent of Jesus and Mary in Karachi, Sr Berchmans was awarded the “Sitara-i-Quaid-i-Azam”, one of the highest civil awards given by the President of  of Pakistan.

The award citation celebrated her “constant adherence to the call of duty over a span of 59 years, which has made Sister Berchmans a living example to emulate”.

During her teaching career, Sr Berchmans taught thousands of students, including the late prime minister of Pakistan, Benazir Bhutto.

Sr Berchmans is the first woman to receive the Benedict Medal. It was previously awarded to Ecumenical Patriarch Bartholomew of Constantinople, Dr Richard Clarke, Archbishop of Armagh and Primate of All Ireland, the former Archbishop of Canterbury, Lord (Rowan) Williams of Oystermouth, and Sir Michael Wilshaw, former Chief Executive of Ofsted and St Mary’s alumnus.

Cardinal Nichols said: “Sr Berchmans’ examples of inclusivity and respect will guide our graduates as they embark on their own teaching journeys and will inspire future generations.” The President of Ireland, Michael D. Higgins, described Sr Berchmans as an illustration of the “beauty and potential of teaching”. He said: “Through her words and actions, Sr Berchmans has not only inspired her students but  encouraged those she met to make positive and lasting contributions to society.”