Love in a changing climate 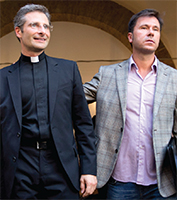 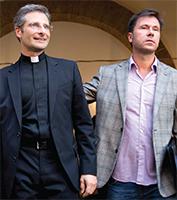 The place of lesbian, gay, bisexual and transgender Catholics in the church family was the controversial issue the synod chose to avoid. Does the minimal reference to them in the final document confirm deadlocked thinking, or offer hopeful grounds for change?

“No change on gays.” The day-after headlines were, as usual, both right and wrong. True, the few mentions in the final document could probably have been written before the Synod on the Family started, by someone who hadn’t given the matter much thought.

Nevertheless, as their own comments to the press showed, synod participants clearly did do much more thinking about LGBT (lesbian, gay, bisexual and transgender) matters than that. Decisions about what to include – and not to include – in the text, compared with the material we received from the circuli minores, can be read as verbal traces of a series of shifts in attitude which do, I think, work very much in favour of LGBT Catholics.

There were two weak-minded “ways out” of the current hierarchical impasse in the Church on matters gay – the first, a bombastic reaffirmation of current teaching as obviously right, the solution of the deluded pure; the second, that the teaching is right, but that there is a problem with the language in which it is communicated – the solution of the ­cowardly cosmeticians. I’m delighted to say we got neither. The low-key reaffirmations of loyalty to current positions in the final ­document have “pro tem” written all over them; and the general dropping from view of matters LGBT towards the end of the synod suggests that something much more interesting may have happened.

It is just conceivable that enough synod participants realised that there is no way to communicate current teaching mercifully, or with less hateful language – maybe because that teaching’s premise of the objectively disordered nature of the “homosexual inclination” is actually false? Teaching others, with however pretty a language, that they must buy into a falsehood about themselves so as to fit into pre-determined schemes of what is right or wrong, is to demand that they indulge a fragile rigidity that is the teachers’ problem, not their own – classic Pharisaism.

I suspect there was enough of a recognition that there is no genuine way out of the impasse without raising a question of doctrine, for it to be better to go quiet on the issue, and punt further study and discussion of the matter to the Holy Father – and quite possibly to the new dicastery he has announced dedicated to laity, family and life. If something like this was what happened, then I’d like to say: this is a really big deal. For the first time in my memory, the bishops seem to have faced up to having a genuine problem on their hands that is their problem, not that of LGBT people, and no apparent way out of it without help.

It is here, I think, that we see something of the genius of Pope Francis. I had feared that his statements about not changing doctrinal matters, but focusing on the pastoral, were a sign of weakness in the face of intransi­gent hardliners and would lead to cosmetic solutions. What a joy to be wrong! It seems rather, that he wanted people to run up against the dead ends of many current positions together so not only would they begin to dare to ask each other, and the Pope, the sort of questions which might lead to a more adult discussion of the matters at hand, but it would actually lead to a consensus of teachers realising that they need to, and want to, think more.

For in fact, when it comes to matters LGBT, the theological issues are not difficult to resolve. As a matter of group psychology, however, allowing the synod fathers, more than a few of whom have a personally complicated involvement with the matter at hand, to reach a consensus that the status quo is untenable, and thus that they actually want to find a way forward: that is difficult indeed. Yet something like the beginnings of this can be detected in the synod’s having punted on this issue: ­nothing now, so as to talk better, later.

It has long been noted that the Second Vatican Council opened up a way for an approach to learning what is true, what is of God, that makes room for the inductive – learning by experience of being led to truth – rather than the deductive approach, dedu­cing the logical consequences of doctrinal a prioris and then instructing people that this is what they ought to know, to think and to feel. And it has equally been noted, since Humanae Vitae, that among many areas where the Church is quite at ease with the inductive, experiential approach, there remains a strictly protected island in which the deductive, syllogistic approach is still regarded as synonymous with “doctrine”. It is no surprise, therefore, that it is in this area, touching on every aspect of family intimacy and the ability to talk honestly, that there is the greatest schism between “official doctrine” and “life”.

The signature achievement of Pope Francis’ synodal process has been, I think, to begin a practical recovery of this element of Vatican II’s breakthrough. He emphasised before, during and after the synod that it is the walking together, which is what “synod” means, that is what it is all about. He let participants understand that the point of the Petrine ministry is to reassure people concerning the presence of the true Master, the one living teaching authority, who is walking alongside them, teaching them starting from where they are, as they discover things that are new and true along the way. In this way, the experiential element of our being taught by Christ will at last be allowed, even by church authority, to be received as what it is.

While the argument was between a fixed “doctrinal” and a more or less indulgent “pastoral” approach, we were never going to get anywhere. But as a synodal path where ­teachers learn, in actual practice, to ask for help in understanding reality as it unfolds so as to be better signs of a living doctrine which is by its nature pastoral – then the Christian promise of Vatican II might be getting back on track. LGBT Catholics like myself will be keen to see what paths of engaging truthfulness are opened up by the promised post-synodal exhortation and, even more, by the practical steps taken by the new dicastery, and by dioceses around the world, to enable synodal conversations to continue.

James Alison is a priest and theologian, currently resident in Madrid. His most recent book is Jesus the Forgiving Victim, an adult introduction to Christian faith. Other material is available on www.jamesalison.co.uk

For what it's worth, James Alison has discussed the doctrinal issues at stake at very clearly and at greater length here: http://www.jamesalison.co.uk/texts/eng17.html

Wow.
Just wow.
And you're a priest???? That really is depressing.
The teachings will not change.

This is the most sensitive and thoughtful and hopeful and inspiring article I have seen on the matter.

I thank you from the bottom of my heart.

..." when it comes to matters LGBT, the theological issues are not difficult to resolve. "....

Perhaps. Though theological issues are based on scriptural issues.

Are Scripture Scholars in agreement yet?

The basic argument is that Scripture writers, like St. Paul & Old Testament sources did not conceive of "homosexuality" as we conceive it today, but were more condemning "unbridled lust".

BuT it will take a lot of convincing before this becomes understood and accepted by theologiand and ordinary readers of the Bible.

Once the Scriptural work is done, then Theologians can begin to wrestle with the implications of "tradition".

And eventually the Church and people just might come around to reversing a long held conviction and belief.

For some people, that would destoy their very basis for "belief". If the Church can "change", then they no longer can trust what is "true".

very good, James! I like what you have to say!