He is the economist credited with having the most influence on the Archbishop of Canterbury. And Paul Dembinski is clear that regulation is not enough to improve banking - a fundamental cultural shift is needed

Paul Dembinski and I are shaking our heads at the craziness of the response to the “greed is good” speech delivered by Michael Douglas in the film Wall Street.

Except we are not really finding it amusing at all. It is the sheer nuttiness of folk we struggle to comprehend. What was intended as a piece of satire by Douglas and director Oliver Stone was seized upon by a generation as a justifying mantra for appalling deeds where banking and the financial markets are concerned. It is proof, agrees Dembinski, of the scale of the task that confronts him as he seeks to emphasise the place of ethics in the financial services industry.

Listening to him and meeting him, it is not difficult to see why Dembinski is so often name-checked by the Archbishop of Canterbury, Justin Welby, as an economist he closely follows – “a friend of mine” for 20 years, he says – or why his research is studied in the Vatican. “I do send my papers there, and I know that someone reads them there,” he says, guardedly.

Given the scandals that have befallen the banking industry, it is clear that ethics are not being universally applied. At the top of the financial industry, “lessons are being forgotten. For much of banking it’s back to business as usual”.

“The financial markets should be no different from the home, where parents will say ‘in our home we don’t do this’ and the message is absorbed and understood,” says Dembinski, although he is quick to acknowledge that there is a breakdown somewhere, adding: “But where? Is it at school and university? Is it in the home?” But he also feels there has been too much banker bashing, and that attacking bankers per se will not solve anything: “There are three agents in the financial industry equation – the saver, the entrepreneur, and the intermediary. We have to look at all three and the roles they play.”

Born in 1955, in Poland, Dembinski is a Catholic, a Swiss national, married with three children. He is blessed with a kindly face, offset by a beard that makes him appear like a spirited uncle – albeit one given to imparting common sense and wisdom. He is comfortable writing and speaking in any one of five languages: English, French, German, Polish and Spanish. For a while, he was Senior Associate Member of St Antony’s College, Oxford.

The reason, perhaps, that Dembinski is so regarded by spiritual leaders is that he does not pretend to be a “pure” economist. He puts economics in the wider context of how it relates to ordinary people and institutions. He crosses disciplinary boundaries – engaging social science as well as economics. So his masters, in 1979, was in political science, but his PhD, obtained in 1982, both from the University of Geneva, was in economics.

He believes the two are intertwined. Fundamentally, he argues, the markets on their own are not enough, and they cannot survive without some form of intervention and protection. So while others push for “systemic sustainability”, he promotes “systemic non-sustainability”. He was proved right in this regard when East Germany and its allies could no longer survive on their own, and the Berlin Wall fell.

In 1996, he founded the Observatoire de la Finance in Geneva, with the aim of highlighting the common good within the financial services industry, and invited the future archbishop on to its editorial board, on which he still sits. The pair had met a few years earlier on the Finance Ethics Group at the Catholic Von Hügel Institute in Cambridge, which influenced Welby’s ideas about ethics and his spirituality. Through Dembinski the archbishop joined the International Association for Christian Social Teaching, which examines Catholic social thought, and since 1998 he has served as its Vice-President.

“Economics is about human behaviour,” he says. He never bought into the free-marketeers’ economic theory of his youth that the most complete expression of economics is the markets, saying: “Many economists thought there was this ultimate layer, marked ‘finance’, and it would bring freedom to everyone.”

But the response of human beings to this ideal, he says, shaking his head again, was to be pragmatically calculating, to remove this freedom of thought by installing algorithms to do their complex trading for them.

It is no good, he maintains, leaving the markets to their own devices. People, “need protection, the market needs protections written in”. Free markets with guaranteed competition are not enough. There will still be those who exploit and manipulate, arguing: “Even if there is competition, people should have an internal compass.” Look, he says, leaning forward, “you’re not free to exceed speed limits when the police and cameras aren’t watching you. It’s like that – people need a moral check on what they’re doing”.

He accepts that much of the trading activity on the markets, especially where derivatives and financial instruments are concerned, is “socially useless” – to quote the former head of the United Kingdom’s Financial Services Authority, Lord (Adair) Turner. But in his eyes, that does not make it socially irrelevant. On the contrary, he says, explaining: “The share of financial services in the GDP is around 10 per cent. About half of that is devoted to risk management and futures, so that’s at least 4 per cent of GDP. Therefore it’s a concern of every one of us.”

And, he says, we should be concerned and annoyed. The capital markets account for incredible sums, but meanwhile much of the world is consigned to poverty. The scale of the industry, the influence it has over flows of capital, and the fact that “there’s an awful lot of money flowing around but it’s not reaching me and you” – these are what Dembinski says should shake us from our complacency, stop us having faith in markets as free entities, and demand influence over them.

His next book is entitled Quo Vadis: Ethics in Finance. It follows Finance: Servant or Deceiver?, published in 2008. His conclusion, then? He laughs: “That finance should be the servant, but it was the deceiver.”

Since Douglas declared “greed is good” in 1987, we have seen the markets fail, scandals galore, and a near financial meltdown. Our solution has been to apply regulation after regulation, to put our belief in compliance. Every financial firm of any significant size has a compliance officer. The biggest banks have hundreds if not thousands of them. But for Dembinski it is not the answer. “Ethics does not equal compliance. I was born under communist rule. Believe you me, rules are not ethics.”

He sees “ethics as framing behaviour”. Ethics should be in the DNA, not written down on pieces of paper. He is fully aware the City can be a tough, aggressive, ruthless place. But that is no excuse for bad behaviour, as he says: “If it’s true that human behaviour is fundamentally selfish, there’s still room for underlying ethics, and there’s a margin for manoeuvre. Ethics can, and should, still be there all right, but implicit not explicit.”

I wish him well. It is refreshing talking to him. Sadly, though, that may be the point: not nearly enough bankers speak his language or share the same thoughts. But at least he is there, holding up a mirror to the markets, one that they can all see. After that, they only have themselves to blame.

Professor Dembinski is speaking alongside Archbishop Welby at a conference at the University of Fribourg, 3-5 September, titled The common good: between past and future.

Chris Blackhurst is a financial journalist.

Jesus did not adjust his moral compass. He championed against the Jews money lending and money laundering that's why they killed him!

I thought the biblical message is NOT TO ADJUST OUR MORAL COMPASS? Something is either right or wrong? Imagine Jesus adjusting his MORAL COMPASS when challenged by the scribes and pharisees/

The appeal for ethical behaviour assumes that people have a rational motive for behaving ethically (as opposed to merely complying with rules). But in the increasingly secularist and materialist Western world, adrift from its Christian roots, individuals cannot rationally embrace ethical behaviour as an end in itself. Rather, Ayn Rand's "rational self-interest" becomes a more fundamental driver of behaviour. For this reason, it seems to me that the crisis faced is not so much an ethical one but a spiritual one. 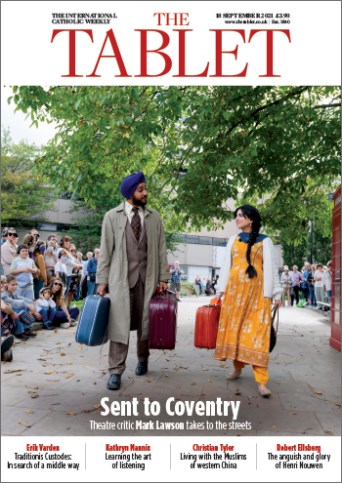