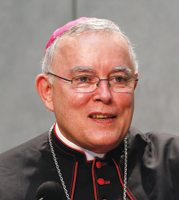 by Angus Ritchie and Nick Spencer 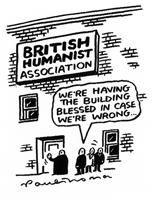 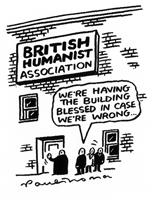 Atheists and rationalists often like to call themselves ‘humanists’. But a report published this week argues that the concept is rooted in Christianity and, deprived of its roots, it cannot thrive

When St Paul spoke to the Athenians, he began by noting the things they knew that they did not know. “For as I went through the city and looked carefully at the objects of your worship, I found among them an altar with the inscription, ‘To an unknown god’. What therefore you worship as unknown, this I proclaim to you.” (Acts 17:23)

Today’s intellectual climate is rather different. By and large, secular culture does not know what it doesn’t know. In a recent speech, Pope Francis highlighted one of its “unknown unknowns”. He warned the European Parliament that “a Europe which is no longer open to the transcendent dimension of life is a Europe which risks slowly losing its own soul and that ‘humanistic spirit’ which it still loves and defends”.

Pope Francis’ comment was simple yet revo­lutionary. While most people now take humanism to be opposed to anything religious, Francis was suggesting that the “humanistic spirit” can only survive within a culture that is open to transcendence. However, linking humanism and Christianity would not have surprised previous generations. Renaissance humanists were thoroughgoing Christians. It was not until the mid twentieth century that the non-religious seized on “humanism” as a description of their beliefs.

Of course, words change their meaning all the time. But the recent and rapid takeover of “humanism” by atheists is of more than etymological interest. It hides a serious and substantive issue – for, as Pope Francis points out, if humanistic values are detached from their metaphysical foundations, there is a real danger they will be eroded.

It is precisely to defend these humanistic values that we have written “The Case for Christian Humanism: why Christians should believe in humanism, and humanists in Christianity”. As we are making a fairly controversial claim, we thought it would be best to start with the British Humanist Association’s own formulation of humanism. According to the BHA, the 2002 Amsterdam Declaration of the International Humanist and Ethical Union is “the official defining statement of World Humanism”. This lists the “fundamentals” of modern humanism, and although the declaration describes humanism as an “alternative to dogmatic religion”, there remains a striking overlap between its values and Christian orthodoxy.

Like Christianity, the Amsterdam Declaration affirms the “worth” and “dignity” of the individual. It believes “morality is an intrinsic part of human nature” and affirms “the importance of literature, music and the visual and performing arts for personal development and fulfilment”. In the seven points of the Amsterdam Declaration, there is only one explicitly anti-religious “fundamental”, and even here there may be more common ground than atheist humanists expect. After all, while it is undoubtedly right to state that the world’s major religions “claim to be based on revelations fixed for all time”, that certainly does not ­preclude the idea, fundamental to humanism, that “reliable knowledge of the world and ourselves arises through a continuing process of observation, evaluation and revision”.

“The Case for Christian Humanism” argues that many of the “fundamentals” of the Amsterdam Declaration require a religious foundation. Ironically, the intellectual threat to the “fundamentals” of human dignity, humanistic ethics and human reason comes from atheism. This is emphatically not to say that atheist humanists themselves are ­necessarily less moral or less reasonable. Rather, our argument is that atheism saws off the ­intellectual branch on which humanism sits.

In the report, we consider three of the greatest “fundamentals” of humanism – human dignity, humanistic ethics and faith in human reason. In each case, we argue, Christianity provides a more secure home than does ­atheism. First, human dignity. Following Immanuel Kant, most modern atheistic humanists seek to ground human dignity in our unique capacity for rational thought and action. The problem with such arguments is that they limit the range of people who can be said to possess this inherent dignity. Arguments that ground our dignity as humans in our capacities exclude those human beings who have either never possessed such rationality, or who have lost it (for example, through degenerative conditions) and have no chance to acquire it again. Indeed, by some reckonings, it even leaves out infants, although the vast majority of them will one day acquire it. Wherever one draws the line, the fact is that when built on these foundations, human ­dignity becomes relative, not absolute.

Secondly, humanistic ethics. Christian and atheist humanists share a determination to use reason to help determine what ethics really demands, and which of our beliefs are simply prejudices. The challenge for atheist humanists is to avoid one of two snares: either making moral truth wholly subjective (collapsing it into whatever our culture currently believes) or being unable to explain how humans have a capacity for discerning genuinely objective moral truths. In essence, an ethical system based on a wholly material understanding of the universe, in which evolution is the only real engine, has great difficulty in asserting that something is object­ively good. The problem atheists have with respect to moral knowledge is part of a far wider difficulty, a point that leads us to a third humanistic fundamental. Atheist humanism undermines not only its capacity to detect moral truth but also its very faith in human reason itself.

Again and again, anti-religious humanists contrast the “reason” at the heart of atheism with the “superstition” and “irrationality” of religious belief. Our report argues that the very opposite is true. Atheism cannot explain why human reason should be trusted. This third great “fundamental” of humanism is only secure within a theistic world view.

The problem for atheist humanists is this: if evolution by natural selection is the only thing providing any kind of purpose or direction to the development of our capacities, then our ability to reason has only been placed in us because it helps us to survive and multiply. Our rational faculty is, then, directed at survival, not at truth. If we are going to trust human reason, we have to explain why a faculty that has emerged to help us survive has also managed to track the truth, particularly in complex areas like science, mathematics, philosophy, or indeed, in ethics.

By contrast, from the earliest days Christian thought has defended human reason, even while acknowledging its limits. It was the second-century apologist Justin Martyr who argued that Christianity is the true fulfilment of all philosophy, because the human capacity for reasoning is in fact a reflection of the divine reason (Logos) which has become flesh in Jesus Christ.

Contemporary Catholic thought draws on and develops this positive account of human reason. In his encyclical Fides et Ratio, John Paul II cited Justin Martyr as “a pioneer of positive engagement with philosophical thinking – albeit with cautious discernment”. He goes on to teach that “even when it engages theology, philosophy must remain faithful to its own principles and methods … At the deepest level, the autonomy which philosophy enjoys is rooted in the fact that reason is by its nature orientated to truth and is equipped moreover with the means necessary to arrive at truth.”

According to Fides et Ratio, “the enterprise of philosophy is always open – at least implicitly – to the supernatural.” We believe Christian humanism is a case in point. The attempt by atheists to keep humanism to themselves threatens its most fundamental values. It is only when humanism is open to the transcendent that it can make sense of these commitments.

Canon Dr Angus Ritchie is director of the Centre for Theology and Community. Nick Spencer is research director at Theos. “The Case for Christian Humanism: why Christians should believe in humanism, and humanists in Christianity”, is published by Theos and available at www.theosthinktank.co.uk

Essentially I think that the universal declaration of human rights represents the outcome of such a process. They are universal in the sense that most people seem to want them, and objective in the same sense. They enable human flourishing. I guess I don’t get the problem: I don’t see why you need theism.

Point three: Atheism cannot explain why reason should be trusted. I’m sorry but to me this seems very straightforwardly easy: first; reasoning has a track record of success, so empirically you can demonstrate that it “works”. See science. Secondly, it seems intuitive that solving problems (arriving at truthful solutions) can add fitness. Hence, we can understand why it might evolve. I don’t see why you need anything theistic.

Point two: Ethics. I think what is being said here is that secular humanistic ethics have great difficulty in asserting objective moral truths. Personally I don’t understand why the assertion of objective moral truths should define some best set of ethics. I think some unpacking is needed here. A naturalistic view of morality sees the moral intuition as being built into human brains through evolution as a result of our history of living in societies (I think this is unquestionably true). This is then modified culturally by social norms and taboos (also unquestionably true). Social norms and taboos change (much research shows that they tend to get better (allow greater human flourishing) over time). The innate moral intuition probably doesn’t change much. A secular humanist would be concerned with engineering the social norms and taboos so as to best enable human flourishing, and to do this through a process of research and dialogue. Hopefully this would generate a process of increasing human ability to flourish. I don’t know what else there is to aim for. As long as the people in society feel increasingly able to flourish, and that is an empirical issue again, I don’t think we need to worry about any objective moral truths, OR, if such things exist (e.g. suffering is bad, happiness is good) they will emerge from the whole process when we ask if people feel able to flourish.

I identify as a secular humanist, and in the aim of mutual enlightenment, here are some personal thoughts on the three main points.

Point one: Human dignity. I think the idea put forward here is that secular humanism is somewhat less inclusive of all humans when it comes to dignity. I don’t feel that the people identified here as potentially excluded by secular humanism (infants, those with degenerative diseases) are undeserving of dignity, and I am sure that most secular humanists would agree. I think the universality of dignity here stems from an empathy issue, rather than solely or directly from some argument from cognition. So: you may be right that the argument from cognition does not include some individuals, but I think the empathy criterion generally does: after all, we might all suffer degenerative conditions at some stage and we are all infants at some stage, and yet we would expect to be treated with dignity. Such dignified treatment might include assisted dying if that were the prior wish of the person involved (thinking of degenerative conditions here). So in practice, I don’t think the individuals you say are excluded under secular humanism are actually excluded from receiving or deserving dignity under secular humanism. One can argue about where the dignity we give out derives from, or should derive from, but in practice it extends as far as our empathy extends. This is an empirical issue. You just need empathy, and all humans have that …