Marriage and the real world

Bishop Philip Egan of Portsmouth has argued that Catholic parliamentarians who voted in favour of gay marriage should be barred from receiving Holy Communion. He has called for the issue to be debated by the Bishops’ Conference of England and Wales. Not surprisingly, Catholic MPs of all shades of opinion have reacted with alarm. The majority of Catholic MPs who voted for the legislation naturally defend their right to do so, but even those – the minority – who voted against say his intervention could be counter-productive. They fear it could make them look like mere spokespersons for the Catholic Church, undermining their role as the elected representatives of all their constituents of whatever persuasions.

While the gay-marriage legislation was before Parliament, the bishops did lobby hard for it to be rejected, particularly among Catholic MPs. But they did not argue, as Bishop Egan seems to imply now, that voting for gay marriage amounted to “illicit cooperation with an unjust law” – the phrase used by Pope John Paul II in the encyclical Evangelium Vitae of 1995 to explain why Catholic legislators should never support legislation allowing abortion. It was clear that virtually all Catholic MPs approached this as an exercise of political judgement. Those who voted for gay marriage accepted the case that the law should not discriminate between people on the basis of sexual orientation. The Catholic Church already opposes what it calls “unjust” discrimination against homosexual people, so the issue boiled down to whether the discrimination in the traditional common law of marriage was just or unjust. That is a prudential judgement, the MPs felt, on which bishops were only entitled to advise, not instruct.

If bishops purport to instruct Catholic MPs how to vote on such matters, there is a clear risk that those MPs would begin to look like episcopal puppets. Indeed, in such a case, when could a Catholic candidate ever expect to be elected? And isn’t the logic of Bishop Egan’s position, therefore, the complete withdrawal of Catholics from elected public office? But in his recent lecture at King’s College, London, entitled “Irrelevant? Should Christianity still have a voice in the public square?” he called for engagement, not disengagement.
He recognised that secularism poses new challenges. “In its 2,000-year history,” he said, “the Church has never before engaged with a secular culture. There will necessarily be an element of trial and error.” Bishops telling MPs how to vote, and punishing them by withholding Communion if they disobey, is clearly in the latter category, not least because the Eucharist, as Pope Francis has repeatedly stated, should never be used as a reward or punishment.

Making it a tool of political leverage would be even worse. But there is a serious issue remaining, and it would indeed be interesting to know what the bishops’ conference made of it. There must come a point where an MP’s behaviour is so at variance with fundamental Christian values that to admit him or her to Communion would be gravely scandalous. The right answer in such a case would be excommunication, after due process. Support for gay marriage for good conscientious reasons clearly does not meet the conditions to justify that.

Bishop Egan described the permitting of gay marriage as "the blackest day in the history of humanity" in a sermon at a Mass I attended last year. Whatever your personal views on gay marriage, that is the most utterly ridiculous and disproportionate thing to say.

and I thought that Jesus came to save sinners, not the self righteous.

Regarding Bishop Egan's stance on not offering Communion to politicians who create scandal by publicly voting in defiance of the Church's teachings: His position is actually the most "humane," as he must consider the soul of the defiant parishioner. Compounding the parishioner's offense against God (by receiving the Lord's body & blood while not in a state of grace) is jeapardizing his mortal soul further and creating more scandal. Father Egan would not be doing his proper job of shepherding. To state some ridiculous thing regarding "in 2014" (as another writer commented) as if we moderns are so morally adept (farcical!)--and as if truth changes with time (wrong!) is just so sad. Truly sad. Bravo and Blessings to Bishop Egan!

The attitude that the Bishop argues for is precisely the one which is actively followed in some "Catholic" countries. I know of one where their President was threatened with ex-communication because he proposed policies which the Church disapproved. This type of interference in the political process ought not be tolerated anywhere in 2014. The Church needs to wise up and under no circumstances could it ever be acceptable in the UK. 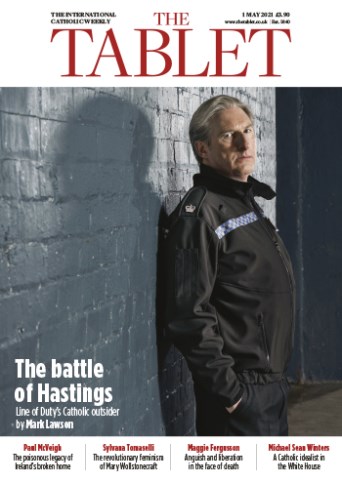