Armenians, both the direct descendants of the survivors of the Genocide of 1915-16 and the others, live conscious that almost nine tenths of the country where their culture had developed and, in spite of all adversities, had endured for almost three millennia, has been cleansed of evidence of Armenia.

Armenians are thus deprived of the capacity to project their past onto a still existing land. And since the world around them has not commonly recognised the Genocide, survivors’ songs, prayers, accounts of landscapes and places and even the language itself are passed down from, as it were, an invisible and intangible world. Moreover the memories of killings, torture, hiding and flight, which are vivid in almost every Armenian family, may also be regarded as tales from nowhere – private records deprived of any public dimension.

The main perpetrators of the Genocide are still celebrated as national heroes in Turkey. The recognition and commemoration of the Genocide represent not only a respect for historical accuracy; it is also a matter of respecting the dignity and the witness of those who survived, of those Armenians today who carry these memories at the very core of their being. 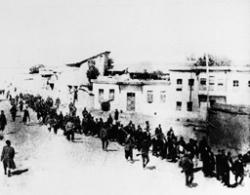 Great Britain is the only large European country which, in an attitude of appeasement towards Turkey, has persistently abstained from such recognition. Britain also had a certain Protestant distrust of Eastern Christians, whose customs were assimilated to idolatry, while they saw Muslims as worshipping the invisible God like good Protestants.

The Genocide affected almost two million Armenians living in the Ottoman Empire. But the Young Turks also tried to export it beyond, from the Balkans to the frontier with the Afghanistan: almost a world war within a world war.

In spring 1916, my great-grandmother, Ashkhen Gedakova, found the strength to organise the flight of her five daughters and the entire household from their native Baku, on the territory of the Russian Empire, across the Caspian Sea and Central Asia to the Fergana Valley: “as far as she could go!”, she told my mother.

But even in Khokand, in modern-day eastern Uzbekistan, the persecution reached the family, and in 1917 they were saved from death only by their Uzbek cook, who told the Turks that no Armenians lived in the house.

Our world has been largely determined by the First World War and by the narrative that we have elaborated about that event. The first totalitarian state is born out of it; the industrial production of gas as a lethal weapon takes place there; the first Fascist movements appear out of its aftermath... the list continues.

But the Armenian Genocide is not present in the normative description of the Great War (at least, in Britain). This means we fail to identify the birth of a phenomenon that would characterise the last century: genocide, ethnic cleansing, people deprived forever of their homeland. Hitler in 1931 presented the Armenian Genocide as a model of what he intended to accomplish. “We intend to introduce vast politics of transfer of populations... Recall the extermination of the Armenians.”

As long as we fail to integrate this catastrophe into the account of the past century we transmit to our children, we fail to apprehend the chain of events that leads all the way to the present and to the atrocities perpetrated against Christians in Syria, Iraq, Egypt and Libya during the last few months, which our media prefers to forget.

Dr Igor Dorfmann-Lazarev is a researcher in Armenian history at the School of Oriental and African Studies, University of London

The Pope was both correct and courageous to describe this as genocide. As of this morning the BBC are still referring to it as a "mass killing."