Can the Church of England save itself? 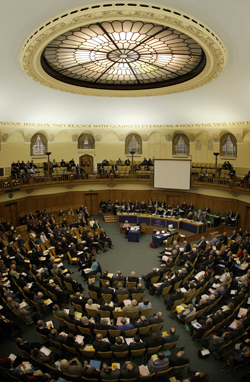 This last week the Church of England published a flurry of reports, under the general title of Reform and Renewal, on how it might reverse the slow but inexorable membership decline (1 per cent per year) that it, along with other British Churches, is experiencing. The new documents cover:

- better training for clergy, both before and after ordination

- changing how the Church Commissioners’ money is used

What is actually proposed, and will it work? Although there will certainly be a lot of lively debate over details, it seems as if the church authorities have at last managed to overcome the inertia inherent in a large and cumbersome institution and made some sensible recommendations. Let’s hope that the General Synod sees it the same way.

The first report Developing Discipleship calls for a sustained focus in every diocese on developing programmes designed to encourage “the discipleship of the whole people of God as the foundation of re-imagining ministry for the 21st Century”. A list of Ten Marks of a Diocese committed to Developing Disciples is offered as a starting point.

More clergy are retiring each year than new ones are ordained. In order to reverse this, and stabilise the headcount at about 8,000, an increase in ordinations of about 50 per cent each year is needed. This implies an increase in the training budget of £10 million. But changes are also needed to the way this money is spent, so as to give dioceses more flexibility, and to ensure that quality is not compromised.

The Church of England does bureaucracy better than almost anyone. Now there are radical proposals that put to shame civil service attempts at cutting government waste. Major opportunities to simplify procedures are identified, for example in the rules surrounding clergy appointments and the processes for reorganising parishes.

Two other reports deal with the ways that money from the Church’s main endowment fund, held by the Church Commissioners, can be used to further these objectives. It is proposed to make major changes in the way funds are allocated to the 42 dioceses, and there is discussion about changing the current policy of strictly preserving the capital value of the endowment.

All of this is in addition to the previously revealed Talent Management plan for spending around £1 million a year on MBA-type training courses for current bishops, cathedral deans, and potential candidates for such senior posts. This “Green Report” was heavily criticised on first appearance, not least for poor theological underpinnings. It is republished with a new covering memo, explaining that training is already underway, and referring to the (infinitely superior) report, from the Faith and Order Commission on Senior Church Leadership, A Resource for Reflection, produced over several years in response to an earlier General Synod request. This is still not officially published, but may appear by the end of the month.

More theological reflection of this calibre to undergird the new plans for both Discipleship and Ministerial Education would be the best way to ensure their successful implementation.

A miracle may yet happen.

Simon Sarmiento is a founder of the Thinking Anglicans website