A way through the woods 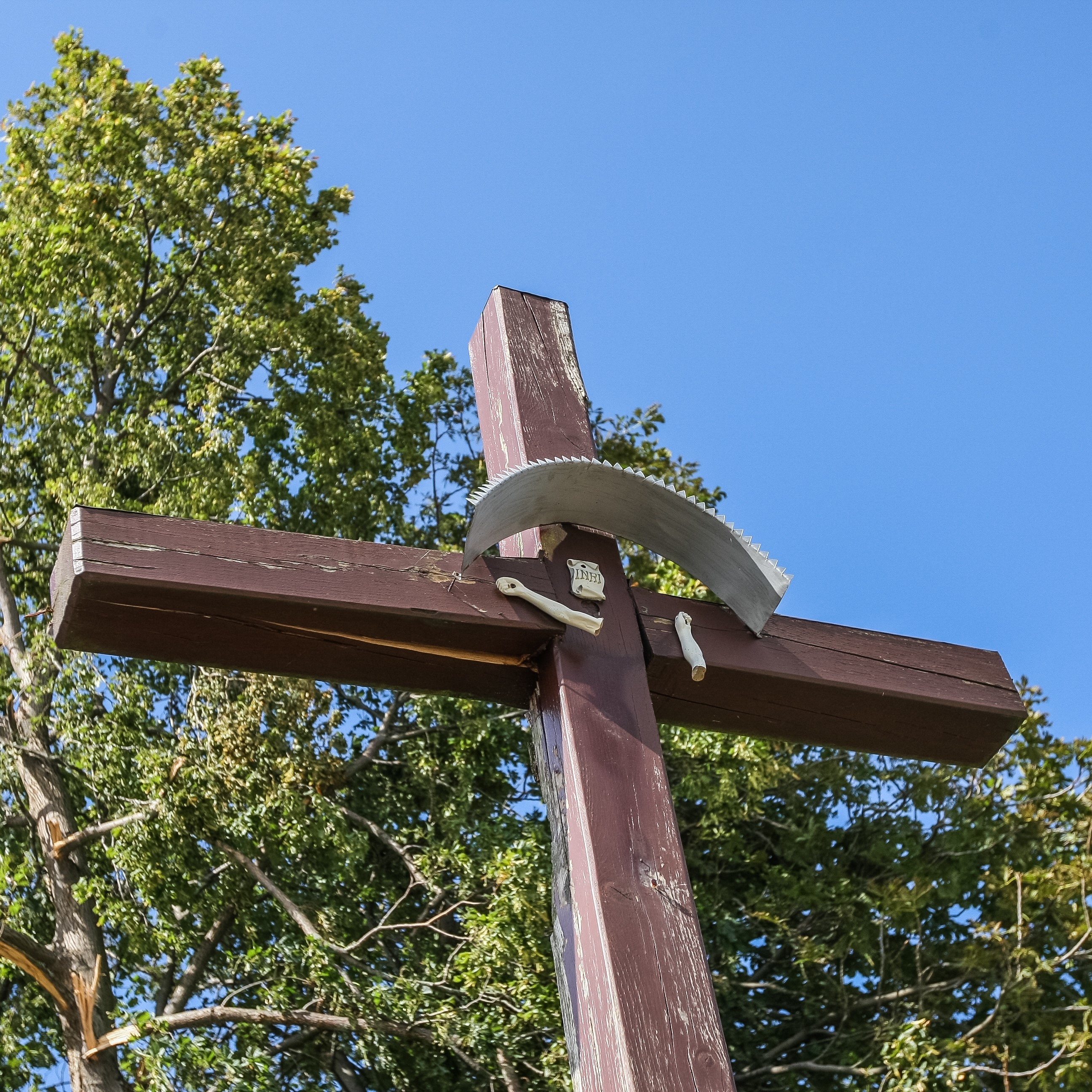 I tried to write about the shape of a post-virus Church and patterns of Eucharistic worship and failed.  Rather than add to many such attempts, I could reflect how, aged over 80, the possibility of never returning to previous patterns of practice, represents, not a diminution of an interaction with Jesus really present in the Eucharist, but an invitation to an enhanced relationship with Jesus, the universal Christ, really present in the whole of creation. The same presence of Divine Love, both modes interacting and transforming each other.

As an altar boy I ‘served at Mass’ almost daily for 10 years, prior to entering a Seminary, aged 17. For 9 years I attended Mass every day, until ordination. As a priest I said mass every day for a further 9 years. As a married man I have attended Mass most every Sunday and many weekdays over the past near 50 years. Since ‘lock down’ and the closure of churches due to the Coronavirus I have not ‘been to mass’ but have watched streamed masses each Sunday for the last 4 months. This practice has shaped my life, but has it transformed my life into a life lived in Christ?

GOING TO THE RIVER.

Walking down to the river through the lynch gate of the woods, I passed under a mighty fallen broken bough, arched as an embossed, carved beamed roof.

I entered the cathedral, crossed myself at the stoup of the river, before taking my seat, a late lover, repentant but forgiven near the side-chapel of the baptism font.

The congregation, priestly all, a heron, a wren, frantic water flies, were already busy praying at their packed places in the pews, joined now by a thrush, busily telling its beads, an adoration, unselfconscious in dappled brown.

A cowled heron knelt motionless in a side chapel, lost in contemplative adoration. Beady-eyed as a cleric – nonetheless content, as were all.

The service had begun a few aeons ago, so I grew content to listen as the river uncurled its readings from the book of the story and revelation of the earth in quick cadenced flow over the tumbled stone lecterns.

The black vested alders bowed to the water’s murmur and joined all the tree choirs singing a soft descant to the hymn of the earth, in slow ranks, swaying sleeves of vestments rustling in unison.

The service entered a deep silent thanksgiving, with filled eyes, the work of the choirs of the community of the earth. My happy, sad tears fell to the river, and were consumed by unnamed fish, gliding.

I did not queue for communion or leave my seat in the side chapel. The wood carved choir stalls sang on, the earth filled the great eucharist with unaffected joy. Body, Blood of creation’s silent groans and laughter.  As

The time for communion crept in slow as an hour, the body holy, the blood shed, the tabernacles stood open, emptied out, always, for ever, for all, as fountains, in flow as constant as the river running.

The gift shared, the Body broken, the Blood shed, from the green shades, to the rippling waters came the lovely procession of the saints, recognised among the poets, bobbing as wagtails, dipping as dippers, lightly – in the shadows, shades - was that Wordsworth buried in a book? Others drifted by as clouds.

Surely Gerard Manley Hopkins, John Clare, Mary Oliver. But as swifts cart-wheeling above, fly Rumi and Farid-Ud-Din Attar, he of roses, in holy conference of the birds, earnestly with, of course, it has to be, Francis and Clare

Then, in a final blessing on the further bank, in mist fires, a figure bent over the kindling of the grateful rich, poor earth and offered the company grilled fish. And we did take and eat. I felt at my shoulder, turned to glimpse, George Herbert, smiling rounding the path to the woods.  Does he walk with that fearsome, lovely man de Chardin? Of course.

But I left long before any aeon’s end, before the heron rose in slow departure. I bowed under the trees and genuflected towards the altar of the Presence, stooped under the arch and wept my happy way towards the graveyard of my living worshipping ancestors. Which reminds me.

When next I walk to the worship of the cathedral of the woods, to the thanksgiving of the river, I must remember to call in, not passing by the glad graves of the risen, grandparents Joe and Hannah, my old uncles and aunts, too numerous to tally, my Mum and Dad, but no - their partying may frighten the birds, not to mention the fishes.  They may well leave it to us, past caring, past cathedral’s need.

We have missed the company of the eucharistic community for the last 4 months and may not to be able to get back soon – if ever. So we can return to the source of the sacrament.  Wheat and grape, human hands working the fruit of the earth already reflect, in the cycle of birth, death and resurrection the real presence of Christ. From this and breathing with the diastole-systole beat of its heart, came Jesus, the Man of life, death and resurrection – a reflection and summation of a paschal mystery already embedded deep in earth’s cycle of life. We can go back from the Eucharist to its context in that wider sacramentality of the real presence of the Universal Christ. We return to the first house of worship, the first solemn liturgy, the basis and ground of all creation where stood the first tree of Adam’s garden and of Calvary and we can bow our heads before the Real Presence of the universal Christ, Lord of all Creation, the Alpha and the Omega, there – at the river in the woods in the presence of the community of all the earth and its peoples.

A closing thought – developed from a meditation by Richard Rohr (23/7/2020) on the day after Mary Magdalen’s feast day.  The risen Jesus, now the Christ, in the garden, prises Mary from her tearful embrace: "Do not cling to me".  Maybe we are being invited to stop clinging to our customary ways of worship and, like Mary, are being asked to give ourselves no just to the ‘Real Presence’ of Jesus in the Eucharist, but to that of which it is a mirrored reflection -  ‘the Source of all love’.  This is the real presence of the Universal Christ, found in the contemplative hearts of all humanity and by way of the path through the trees – in creation – the first book of revelation. This path leads through a contemplative reading and praying with the community of the church, to that second volume – the record of that Divine-Human dialogue contained in Scripture.  May it be that the love of Jesus in the Eucharist has done its slow work of transformation with us and so frees us to love and ‘let go’ of our customary practices?  A life lived in Christ transforms. If we can ever gather again to celebrate the sacrament of the Eucharist, it will be immeasurably enriched by our experience of that wider sacramentality of the sacred earth and its peoples which give it a transforming potency we may have never experienced or realised as fully before.

David Jackson, born in 1938, is a native of Bradford, and after working in education, first as a priest and then as a family man, became the Coordinator of the Bradford Interfaith Education Centre and the Interreligious Relations Coordinator for the Diocese of Leeds. An on-going fascination with the concept of dialogue led to reflections on the readings of the Sunday Lectionary, ‘Dialogue of the Heart’. He retired in 2011, and, now in his 80s, he tries to balance (badly) the practice of silent prayer with support for all who work for justice, peace, non-violence and ‘care for our common home’. His feet are kept firmly on the ground by the volunteer work of Teresa, his wife, with an Asylum Seeker housing project in Bradford.”
Back to articles