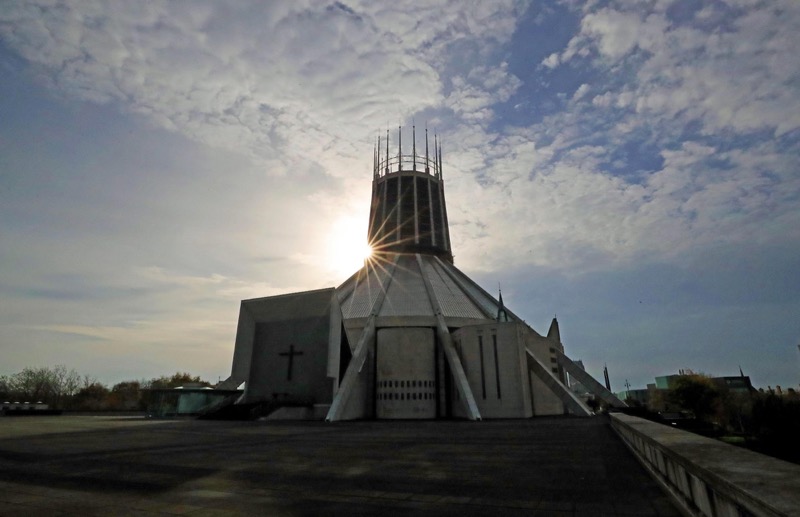 St Josephine Bakhita and the fight against trafficking

Slavery – Human Trafficking – Near YOU! 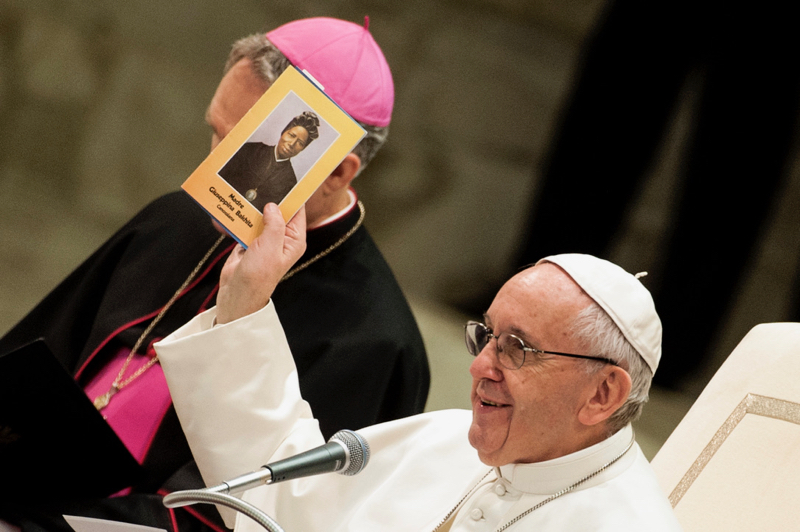 Pope Francis shows a book with the picture of Saint Giuseppina Bakhita during a weekly general audience at Paul VI audience Hall at the Vatican.
FABIO PIGNATA/CPP/IPA MilestoneMedia/PA Images

We are pleased to have a patron saint for victims of human trafficking, a woman from Sudan who herself was a victim of trafficking. In 2000, Pope Francis canonised this remarkable woman. One of his first missions as Pope, in 2013, was to call a meeting of international persons who were working to eliminate human trafficking and modern slavery, as he described it, a "vile trade".

Who is this St Josephine Bakhita, whose feast day we celebrate tomorrow? Her story could be the story of countless victims today, who are bought and sold for profit.

What we are told is that she was born in Darfur, Sudan, in 1869. But her real name is unknown. She was so traumatised as a young child that she forgot her name. Ironically, her traffickers named her the "fortunate" one – "Bakhita". According to local archives, she was the niece of a chief of her village. She had a normal, happy childhood filled with love and care. However, Darfur in the 1800s was a stomping ground for armed slave-raiders. There were regular kidnappings in the region. Children were sold in the slave-markets.

"Bakhita" was abducted at the age of nine. In some of her own words: “I was nine years old. I was walking in the fields with my friends, a bit far away from home. Two strangers appeared from behind a fence. One said to my friend: ‘Let the small girls go into the forest to pick me some fruits. You continue walking, we’ll catch up with you soon.’ His plan was to fool my friend so he could kidnap me and she would not be there to tell.

"I did what I was told. Once we were in the forest, two men came from behind. One grabbed me vigorously. The other pulled out a knife and held it to my side. ‘If you cry, you’ll die! Follow us!’ I was terrified.”

Traumatised by this and what followed, "Bakhita" could not remember her name. Sold from slave-trader to slave-trader – six times in all – she was beaten, tortured, punished, and bore the brutal scars on her body. Her fifth "owner" was Calixto Leganini, an Italian Consul. After two years, he took Bakhita to Italy. He sold her to a friend Augusto Michieli, who in turn used her to babysit his daughter and accompany the child to Venice to a convent run by the Canossian Sisters.  This was the beginning of her path to freedom.

For the first time, since the age of nine, she experienced love, affection and kindness from the sisters. She learned about God’s love and Jesus’ dying on the cross, forgiving his enemies. She was drawn to their way of life. The Canossian Sisters and the Patriarch of Venice intervened on her behalf and since slavery had been declared illegal in Italy in 1885, a judge ruled that she was a free person.

She asked to be baptised. She took the name "Josephine Margaret" for her baptism and confirmation in 1890, when she was now aged 21. Three years later, she entered the convent. She spent the next 45 years of her life cooking, cleaning, sewing and answering the door at the convent. Her welcome and kindness was well-known.

As I said, this could be the story of countless victims today. One needs only to scan the news to hear "32 Libyans rescued on the Mediterranean Sea; 60 migrants intercepted on the English Channel; 39 Vietnamese found suffocated in a container truck in Essex." All these people were in pursuit of a better life, fleeing lives of slavery and poverty.

The International Labour Organisation figures put the trade in people as the second most lucrative business in the world, after arms sales. There are upwards of 40 million slaves worldwide. But these are not just statistics to us. All have a human face.

This international crime against humanity takes many forms. From sex and labour trafficking to domestic slavery, forced begging, petty crime, organ trafficking, child soldiers and forced marriages. The invisible signs are "in plain sight" in the agricultural, seafood, construction, textiles, hospitality and tourist industries. Nail-bars and car-washes are prolific in our towns and cities – often the hidden avenues for traffickers.

We are lucky to have a leader like Pope Francis as a great champion in his call to Catholics, Christians and all people of goodwill to collaborate in the effort to eliminate human trafficking. "No more Slaves...end the scourge which creates a wound in the side of humanity," he says.

It may be a time to examine our consumer habits and choices. When we demand "cheap" labour, "cheap" clothes, "cheap" goods, someone pays the price. Often it is the price of exploitation, of slave-labour.

The challenges to be addressed are not insubstantial. However, there is always hope; always good news and happy endings. We can take heart from the international organisations and communities legislating against human trafficking. The 2030 UN Sustainable development goals are an incentive to work towards, making the world a fairer place. Prevention is key. Health-care providers, transport companies, law makers, border and police patrols all play their part in the care and rescue of victims. Many victims in the UK and across Europe are housed in former convents, where they get safe shelter, healthcare, accompaniment, vocational training as well as professional support and a chance of rehabilitation. Female Religious Congregations are often the first responders for prevention and rescue. RENATE - Religious in Europe Networking Against Trafficking and Exploitation - comprises 63 different Religious congregations, in 30 European countries.

This 8th February, take time to stop, to reflect and bring to mind the countless millions of women, men and children who are trapped in this dark world of slavery. Now is the time for our shared global community to respond to Human Trafficking. We can’t wait for others to do something: Our slogan is: Slavery – Human Trafficking – Near YOU!

Renate – Religious in Europe Networking Against Trafficking and Exploitation.