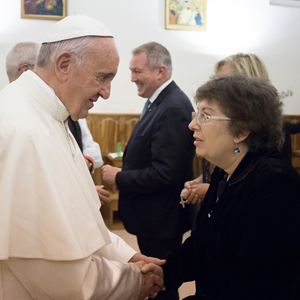 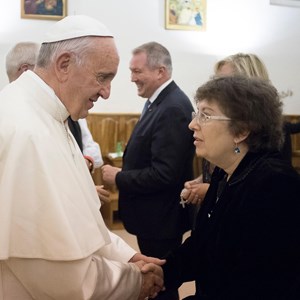 Tablet editor Catherine Pepinster is to step down at the end of this year.

Ms Pepinster is the first woman editor in The Tablet’s 176 year history.

During her 13-year tenure at The Tablet she has been responsible for the coverage of three papacies. She was responsible for The Tablet’s reporting of the death of John Paul II, the election of Benedict XVI and his shock resignation as well as the conclave that elected Pope Francis, with whom she is pictured in Rome in October 2016. Another highlight of her time at The Tablet was the state visit of Benedict XVI to the UK in 2010.

The past 13 years have also seen great changes at The Tablet. It has been redesigned, its online presence has been substantially expanded and its social media created. In 2015, Ms Pepinster led the journal, one of the oldest in Britain, as it marked its 175th year anniversary.

She said: “It has been a pleasure and an absolute privilege to edit The Tablet for the past 13 years. I have led a brilliant and committed team of journalists who have reported as history is made in the Catholic Church. The Tablet is able to draw on an unrivalled pool of writing talent from around the world  to explain to our readers what these changes mean and why they matter. I wish the paper well and hope to continue to be associated with it."

Next year Catherine Pepinster’s book, The Keys and The Kingdom: The British and the Papacy, will be published by T & T Clark, an imprint of Bloomsbury.

From 1 January 2017 the acting editor of The Tablet will be the current deputy editor, Brendan Walsh.