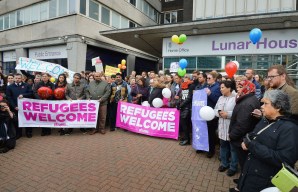 A united effort by local Catholic, Baptist and Anglican churches in Croydon to welcome and support child migrants arriving from Calais has been “the backbone behind the operation”, a charity helping refugees has said.
“Everything we’ve needed they’ve provided,” explained James Asfa, community organiser at Citizens UK, the British charity coordinating the welcome.
St Mary’s Roman Catholic Church; St Michael and All Angels Anglican Church and West Croydon Baptist Church were given just 48 hours’ notice to provide volunteers checked by the Disclosure and Barring Service (DBS), who were willing to welcome migrant children arriving in Croydon, south London, and to sit with them as they went through their interviews at the Home Office immigration screening centre, Lunar House.
The three churches have provided around 400 volunteers between them since the race to screen as many children as possible before the demolition of the “Jungle” camp began, explained Asfa. “It’s been amazing, the number of people wanting to help has been humbling,” he added.
Fr Michael Scanlon, parish priest of St Mary’s Catholic Church, who has spent every day for the past week at Lunar House, said he was proud of his parish and the way they had stepped up to the challenge. More than 100 people from the congregation have volunteered within Lunar House and outside it welcoming the migrants, explained Fr Michael. “Volunteers have stood out in the cold chanting: ‘Children from Calais you are welcome,’” he added.
Permanent deacon to the parish, Vincent Morrison, is one of around 30 DBS-checked members of the parish to assist the child refugees as they have gone through the screening process. St Mary’s has also opened its newly extended church hall as a refuge for migrants and a place for volunteers to congregate.
“Social justice is part of the journey of faith. We are called to witness the Gospel and to love our neighbours,” said Fr Michael. “This story of welcome has provided an opportunity to do so.” Adding that it has also been an opportunity to work ecumenically with fellow Christians and other faiths, Fr Michael said they hoped they would be able to do more in this regard as children continued to arrive from Calais.
Anglican Bishop of Croydon Jonathan Clark, described by Citizens UK as a catalyst behind the welcome movement, has urged the Government to “redouble its efforts” to transfer all eligible children in Calais to the UK, as demolition work begins.
In the past week more than 200 children have been brought to the UK, approximately 15 per cent of the total number in the camp, Citizens UK estimated. On 22 October, 54 unaccompanied minors, mostly Eritrean girls, were the first to come under the Dubs amendment government pledge to help unaccompanied children.
Back to articles
Back to articles