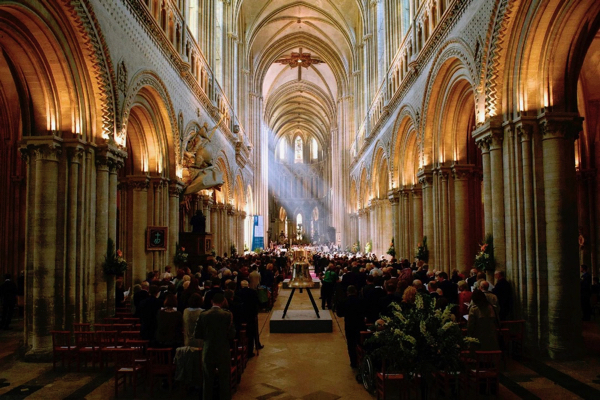 by Christopher Lamb , in Australia

The disagreements inside Australia’s council echo the tensions inside global Catholicism.

An image from the opening Mass at the plenary council in Australia.
Fiona Basile

Tensions inside Australia’s plenary council have burst into the open after motions on the role of women failed to get a majority and a number of female delegates staged a silent protest inside the assembly hall.

A motion which included a resolution to consider female deacons, should Pope Francis authorise such a move, was accepted by a majority of the 277 delegates but failed to pass after the bishops did not achieve the required majority.

According to the rules of the plenary council, all motions require a two-thirds majority of delegates and bishops. The members of the council have a “consultative” vote and bishops a “deliberative” one.

The results of the voting caused upset among a number of female and male delegates who stood silently together on one side of the assembly room to make their feelings known.

Proceedings were suspended as bishops then held emergency talks to find a resolution. After the talks, the council announced that members will now reconsider the motions that failed to pass and have formed a four-person drafting committee to come up with a new text which will be then presented to members.

“Yesterday I felt overwhelmingly sad because it was some women who spoke against the enhancement of women’s roles in the Church,” Sr Patty Fawkner, the leader of the Good Samaritan sisters, the first religious congregation, founded in Australia, told The Tablet.

“Women’s participation in leadership and governance structures should not necessarily be equated with a desire for ordination to the priesthood.”

But she added: “I do feel hopeful, however, because proceedings stopped, we paused, listened and recognised we could not leave this plenary council without saying something about women’s roles in governance in the Church.”

A separate motion, which called for women to “participate in ministries and roles that are stable, publicly recognised, resourced with appropriate formation including theological education and commissioned by the bishop” also failed to reach a majority both among delegates and bishops.

While no reasons were given for why people voted against this motion, one delegate told The Tablet that a number felt that the wording of the motion did not adequately reflect the work women are already doing in the Church and their feeling of exclusion.

The disagreements inside Australia’s council echo the tensions inside global Catholicism which have emerged during the synod process.

Francis’ desire for a synodal Church is still in its early stages, and in some ways the process in Australia, the first of its kind in the country, is reflective of that. Some inside the council hall are hopeful that the tensions unleashed today will help deepen the discernment process.

Bishop Greg Homeming, the leader of the Diocese of Lismore and a Carmelite who is widely respected for his spiritual leadership, said humility was crucial.

“Everyone has a responsibility to say what they think but as soon as they say it they must let go of it in case it is not what God thinks,” the bishop told The Tablet. “The only way is synodal because the Church can’t be autocratic anymore.”

The question of female deacons is one that has been part of the Catholic conversation after the Pope ordered a commission on the topic in 2016.

Following the 2019 Amazon synod, where the topic was once again raised by those taking part, he re-constituted the commission.

Across the global Church, the synodal discussions one the role of women has been raised as a headline topic by ordinary Catholics.

But the question of women’s ordination, either as deacons or to the priesthood, is a highly sensitive one and fiercely opposed by some given Pope John Paul II’s ruling against female ordination, something he said that must be held definitively. The diaconate, which is a distinct office from the priesthood, is being called for by woman and others in places like the Amazon and Australia as a way to bolster the Church’s presence where there is a serious shortage of priests.

A plenary council is the highest form of gathering of a local Church and has the authority to issue binding decrees, provided they are signed off by the bishops and the Holy See.

Australia’s plenary council began in 2016 and is considered one of the leading examples of a move towards a synodal Church in the English speaking world. An initial set of motions on the general direction of the Church, a response to the abuse scandals and attempts to better better include Aboriginal and Torres Strait Islanders were passed on Tuesday 5 July. The assembly is due to close on 9 July.

The bold vision that underpins the synodal process in Australia