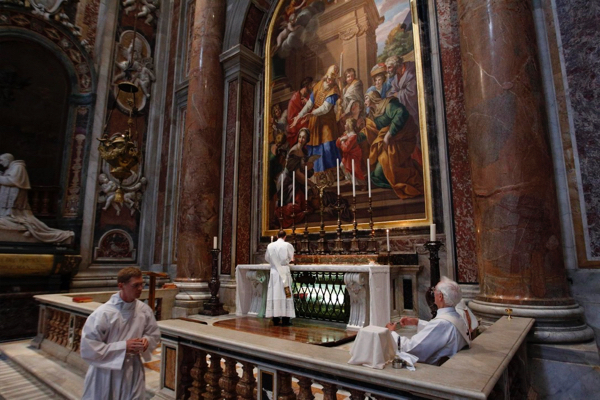 The Latin patriarch of Jerusalem said it was “our right and duty as Christians to uphold the city’s openness and universality”. 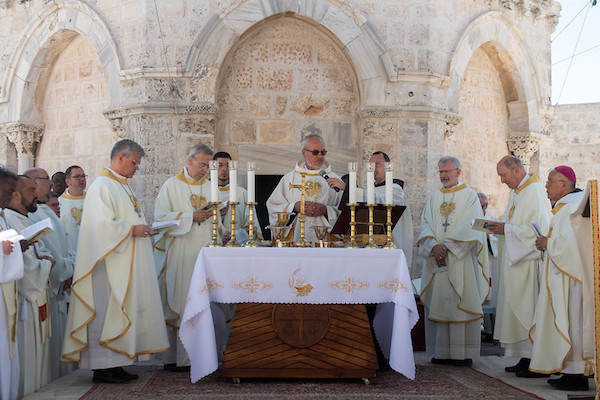 Bishops of the Middle East Coordination celebrate the Mass of the Solemnity of the Ascension of the Lord at the Mount of Olives, Jerusalem.
Catholic Bishops’ Conference of England and Wales/Mazur

A delegation of Catholic bishops has called on all Christians to protect the sacred character of Jerusalem, “as a place of dialogue and unity between faiths”.

“It must remain a common patrimony and never become the exclusive monopoly of any one religion,” said the bishops of the Holy Land Coordination 2022 in a communiqué marking the end of their visit to the city on 26 May, the Feast of the Ascension.

They warned that the Christian community in Jerusalem was under threat, “facing violence and intimidation by settler groups, restrictions on their freedom of movement, or separation from their families”, and expressed concerns about “unilateral restrictions on freedom of worship during Easter, imposed by the Israeli police”.

The delegation was led by the Bishop of Clifton, Declan Lang, chair of the Holy Land Coordination, and included the Archbishop of Glasgow, William Nolan, and representatives from the Irish, German and Nordic and Swiss bishops’ conferences.

They also noted the grief at the killing of the Palestinian Catholic journalist Shireen Abu Akleh on 11 May, and the attack on her funeral by Israeli police. The bishops had offered their condolences to her family at a meeting on 21 May.

A joint statement from the Greek and Latin patriarchs of Jerusalem, along with bishops from other denominations, had condemned the attack on mourners in the St Joseph Hospital as “a severe violation of international norms and regulations” which “deeply wounded not only the Christian community, the Sisters of St Joseph of the Apparition, the owners of the hospital, and all the hospital staff, but also all people who in that place have found and still find peace and hospitality”.

The Holy Land Coordination communiqué cited the Latin patriarch, Pierbattista Pizzaballa, who called for a “new narrative” of Jerusalem and said it was “our right and duty as Christians to uphold the city’s openness and universality”.

Speaking at the visit’s conclusion, the patriarch said: “In our Christian tradition, the role of Jerusalem is to be open and the gates are there to ‘define’ the identities but not to ‘defend’ from others.”

“We have to let people know that we want to be inclusive without ‘cancelling’ different identities,” he continued.

The Holy Land Coordination began in 2000, as a means for the bishops of Europe, North America and South Africa “to remind the ‘living stones’ of the Christian communities in the Holy Land that they are not forgotten by their brothers and sisters in other parts of the world”.  Each year a delegation of bishops visits the churches and organisations supporting the Christians in Jerusalem and the surrounding region.

Bishop Lang, who announced his retirement from the chair at the end of this year’s visit, affirmed the importance of the Holy Land to the universal Church:

“Our relationship with God is enriched by our meeting with the people of the Holy Land. They open our eyes to those messages of the Gospel which our eyes our closed to due to differences in society.”