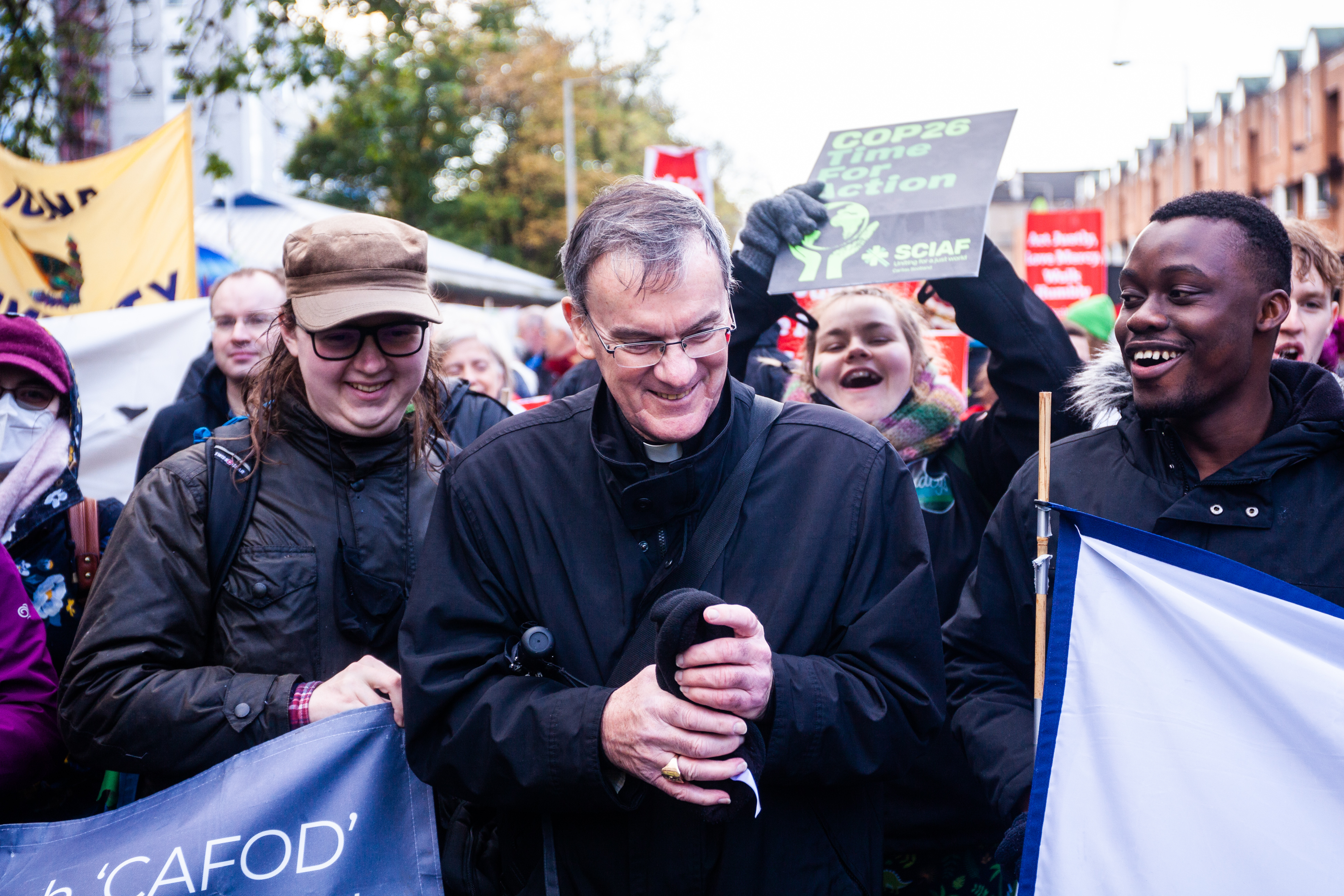 Bishop John Arnold said: “It is to our shame that we have failed in our negotiations to provide the funding required by the poorest nations.”
Thom Flint/Cafod

The outcome of the COP26 Climate summit in Glasgow has been described as “disappointing” by the lead bishop on the environment for England and Wales.

Bishop of Salford John Arnold, who was in Glasgow for the conference, said: “Having seen the enthusiasm of so many people, expressing their hopes for the COP26 conference, having read so much about the science that has accurately explained what damage we have done to our climate and our world... the plan is not there.”

He added: “It is to our shame that we have failed in our negotiations to provide the funding required by the poorest nations to repair the damage done.”

Cafod said: “COP26 has handed a threadbare lifeline to the world’s most vulnerable people,” after the Glasgow climate pact was released yesterday, a day after the summit was due to finish.”

Cafod director Christine Allen said: “The question is, are we travelling far enough, fast enough and fairly enough – to which the answer is no. In the end it wasn’t enough but we have a year to keep pushing.”

There will be a drive in the leadup to COP27 in Egypt a year from now, to limit temperature increases to 1.5C and deliver the climate finance so desperately needed, she said.

Cafod believes steps were taken in the right direction, with a call to accelerate the phase-out of inefficient fossil fuel subsidies, even  without a clear deadline. However, the nearly 200 countries at COP26 failed to deliver on loss and damage experienced by countries at the front line of climate catastrophes.

Lorna Gold, based in Ireland and board chair of the Laudato Si’ movement, suggested that “a big COP26 win in my eyes is the fact they need to come back next year with better plans, not in 2025, and we have a year to ratchet up pressure now.”

The movement led a flurry of online activity during the final discussions, galvanising more than 60 Catholic organisations, missionary groups and prominent Catholics within a few hours to issue a statement on the CO26 draft agreement, lobbying to strengthen it.

“We must reach an agreement in Glasgow that sets a clear and ambitious timeline for a just transition away from harmful fossil fuels,” said the statement, and as Catholics other priorities included “ensuring human rights and environmental safeguards, recognising the rights of Indigenous peoples and local communities and keeping the commitment of 1.5C.”

Paul Chitnis, director of Jesuit Missions, said that it is “vital that people of faith remain hopeful”. That hope, he felt, has come from the demonstrations outside the summit and from the pilgrimages praying for the success of the conference.

Amanda Mukwashi, chief executive of Christian Aid, said: “Throughout COP26, people of faith united with activists from the Global South, feminists, youth and indigenous people to demand climate justice. Our movement has never been stronger and this must be the legacy from Glasgow to keep hope alive.”

Tearfund recognised steps forward, but said: “We lament that the talks have fallen short of delivering justice and a safer future for millions of people.”

Ecumenical conservation charity A Rocha said: “COP26 failed to deliver on its key objectives but holds out hope of progress next year.”

While the agreement won applause for keeping alive the hope of capping global warming at 1.5C, many of the nearly 200 national delegations wished they’d come away with more. National pledges currently have the world on track for about 2.4C of warming. The Glasgow climate pact, does, however, request countries to update their pledges in line with 1.5C in the next year, and commits to considering the adequacy of the aggregated pledges at the COP in 2022, instead of waiting until 2025 as originally planned.

The British COP26 president, Alok Sharma, was visibly emotional after a last-minute drama as India, backed by China and other coal-dependent developing nations, rejected a clause calling for the “phase-out” of coal-fired power and it was amended to “phase down”.

Small island nations were dismayed but the delegate from the vulnerable Marshall islands in the Pacific said: “This agreement has made some progress and we cannot afford no progress.”

Sharma described the deal struck as a “fragile win”. At a post COP26 press conference on Sunday afternoon, Prime Minister Boris Johnson said: “We’ve kept alive the ambition to do something about the warming of the planet.”