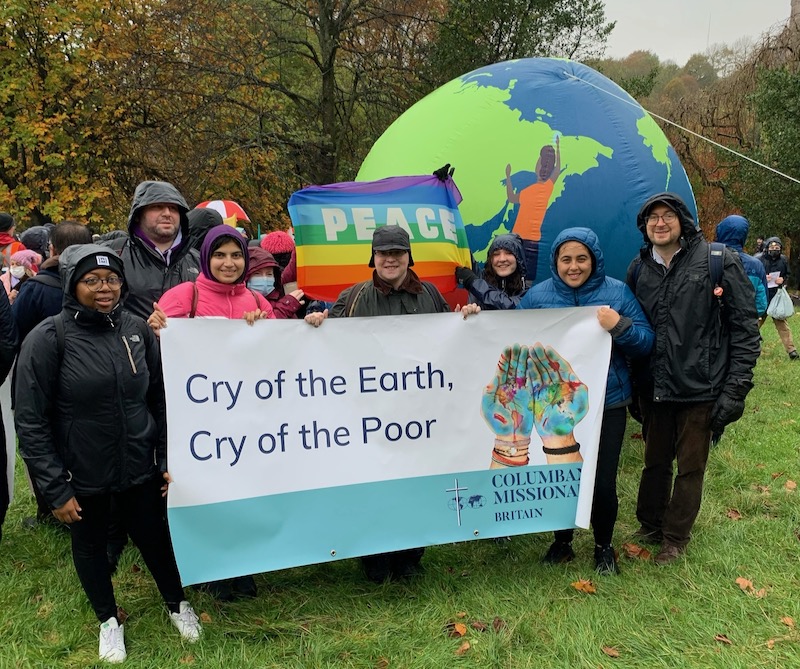 Columbans display their banner during COP26, quoting from the words of Pope Francis.
Ellen Teague

Members of the Catholic Church along with hundreds of people from other denominations and faiths have continued lobbying and praying for a positive outcome at COP26, the UN climate summit in Glasgow, as it draws to a close.

Bishop Hugh Gilbert of Aberdeen was the main celebrant, alongside six out of the eight Scottish Catholic bishops, the England and Wales and Ireland leads on the environment, Bishop John Arnold of Salford and Bishop Martin Hayes of Kilmore, and around 20 priests.

Other concelebrants included the Apostolic Nuncio, Archbishop Claudio Gugerotti, and Fr Joshtrom Isaac Kureethadam, coordinator of ecology and creation at the Vatican Dicastery for Promoting Integral Human Development and a member of the Vatican delegation to COP26.

Bishop William Nolan of Galloway, president of Scotland Justice and Peace, was clapped after a rousing call for serious action to respond to “the cry of the Earth and the cry of the poor”, a quote from Pope Francis in his 2015 Encyclical Laudato Si.

In his homily he said: “We need to hold our heads in shame at creation being destroyed by human activity, with polluted air, plastics in our rivers and oceans, and large-scale mining without a care about biodiversity or indigenous peoples.”

He said citizens are more than mere consumers: “We are here because our faith urges us to respond to the environmental crisis.”  Drawing on the Church’s social teaching he said: “Earth’s resources are finite and not just to be used by the powerful and rich.”

Bidding prayers for Christian champions of the environment and for a just sharing of Earth’s resources gave a spiritual context for the concerns being aired at COP26.

A rousing rendition of All creatures of our God and King at the end sent many heading off to an ecumenical service for COP26 at 12th century Glasgow Cathedral, organised by Glasgow Churches Together to show ecumenical solidarity for nations already bearing the brunt of climate change impacts.

The previous day many had walked in the faith bloc of the Glasgow march for the Global Day of Climate Action, alongside around 120,000 campaigners.

Among them were around 30 people who had already walked from Edinburgh to Glasgow over three days with Jesuit Missions.

Paul Chitnis, director of Jesuit Missions, Fr Damian Howard SJ, provincial of the Jesuits in Britain, Bishop Arnold and representatives from Stonyhurst College set off with that group for a five mile walk in the wind and rain from Kelvingrove Park through Central Glasgow.

Hymns were sung throughout, as they were by a group from the Iona Community, led by liturgist Revd John Bell. Others in the faith bloc included Columban Missionaries, Cafod, Glasgow Interfaith, Quakers, Justice and Peace activists from Lancaster and Wrexham dioceses, and the Laudato Si’ movement with a large inflatable globe.

Indigenous people from North and South America in distinctive headdresses and others from the global south attracted most media attention.

Banners expressed the demands of the walkers: “No more Blah, Act Now”, “Count military emissions”, “System Change not Climate Change”, “Decent jobs on a living planet”, “There is no climate justice without debt justice”. The march and all those around the UK and the world were acknowledged in the summit.

Church pressure was kept up on the summit throughout. On Monday the Laudato Si’ movement and Operation Noah hosted an online event on fossil fuel divestment and climate justice where  the movement’s Dr Lorna Gold was a speaker.

A declaration by a coalition of faith leaders announced the largest-ever divestment from fossil fuels by faith groups that included the Catholic Bishops’ Conference of Scotland. Guidance was released by the Guardians of Creation project for the Catholic Church in England and Wales on accounting methods for net zero carbon.