Warnings of violence at Biden inauguration 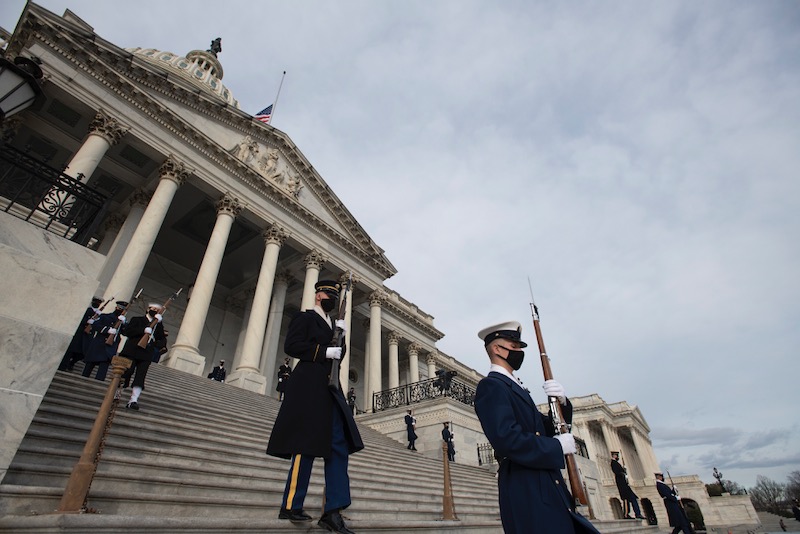 The Honour Guard arrives at the East Front of the US Capitol during the dress rehearsal for the inauguration.
Rod Lamkey/PA

Senior Catholics are urging peace as US government intelligence agencies have warned of possible violence in advance of the inauguration of President-elect Joe Biden.

Archbishop Paul Coakley, chair of the bishops’ conference committee on domestic justice and human development, said: “Like Pope Francis, after viewing the riot at the US Capitol on January 6, I was ‘astonished’: a violent attack on a peaceful political process at the heart of our democracy, bombs placed at political party headquarters, the murder of a police officer and others dead and injured, symbols of racial hatred, calls to execute politicians, a gallows and a noose.

“There were those present who misappropriated Christian symbols as well. There must be accountability for these actions. As a Christian, I must say to anyone considering further violence: you are being led astray by a voice that is not from God.”

Invoking St Paul’s letter to the Galatians, Coakley admonished those contemplating violence: “Please look into your heart.  Look at the images of the events on January 6. Look at the messages that accompanied them on social media.

“Look at the symbols of racial hatred in the crowd. If you supported this, or are considering further actions in the coming week, ask: is what I intend the fruit of the Holy Spirit? Are my intentions expressions of love for others, including those I may consider enemies? Are they reflections of joy? Will they lead to peace? Do they exhibit patience, kindness, gentleness, and self-control?”

Church representatives, above all from Europe, kept a low profile as far as the storm on the US Capitol is concerned with two outspoken exceptions.

In his weekly column in Vienna’s freesheet “Heute” on 15 January, Cardinal Christoph Schönborn sharply criticised President Donald Trump for falsely telling his followers that the US election was rigged and inciting them to storm the Capitol.

He could not get the images of the storming of the Capitol out of his head, Schönborn said. “How could this happen? Five people dead. many injured, offices devastated, the rule of law trampled on. And now people are saying that this was an evil ‘mob’, the scum of civilised humanity.”

He did not agree, the cardinal said. They were not an evil mob. They were led astray and lied to.

They were told: “Those up there, the government and parliament, stole the election from you. The elections were rigged. You must fight back.”

That was what the still-incumbent president of the most powerful country in the world had “hammered” into people’s heads non-stop via Twitter and other channels, Schönborn pointed out.

Already weeks before the election, Trump had declared that if he were not re-elected that could only be due to electoral fraud. He had called for protest. “Go to the Capitol”, he had said. The crowd that stormed the Capitol was “falsely convinced that they were fighting the biggest election fraud in America’s history”, the cardinal recalled and warned that that was happened when truth was no longer distinguished from lies. “What a warning against the power of lies!” he emphasised.

Already the week previously, Archbishop Ludwig Schick of Bamberg, who is responsible for World Church affairs in the German bishops’ conference, called for President Trump and all those who had stormed the Capitol to be brought to justice.

“Those who broke into the Capitol must be brought to justice. The president can be no exception. Perpetrators of violence must be held accountable and punished”, Schick declared on the German bishops’ conference’s official website, katholisch.de, on 8 January.

°The Legionaries of Christ University in Rome will no longer present its “A Life for Life” Award to Fr Frank Pavone, the controversial national director of Priests for Life. Fr Gonzalo Miranda, dean of the bioethics faculty, said: “It was a sum of factors, especially in relation to the political situation, but also ecclesial.” Pavone, a priest of Amarillo Diocese, Texas, and a staunch supporter of outgoing US President Donald Trump, tweeted as Trump supporters stormed the Capitol on 6 January: “What is intolerable is that a fraudulent, invalid, and illegitimate president would be inaugurated on January 20.”