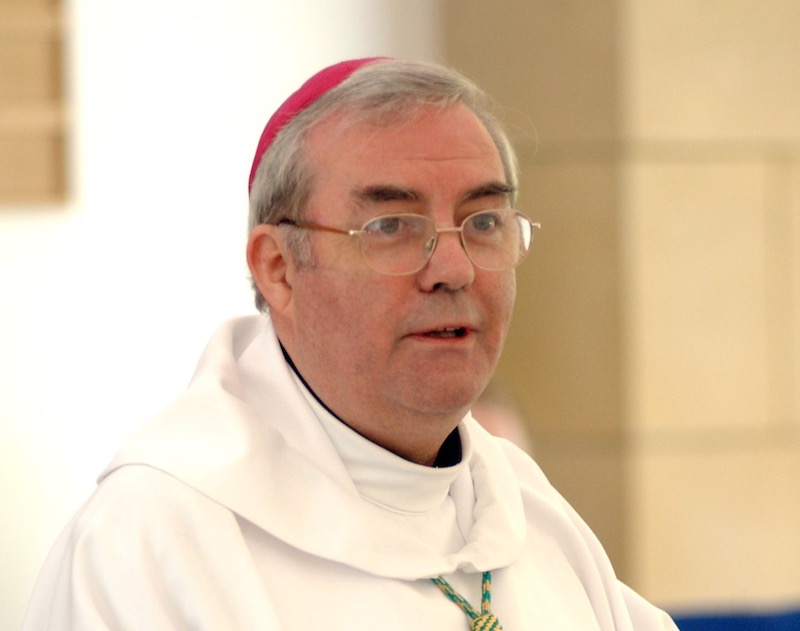 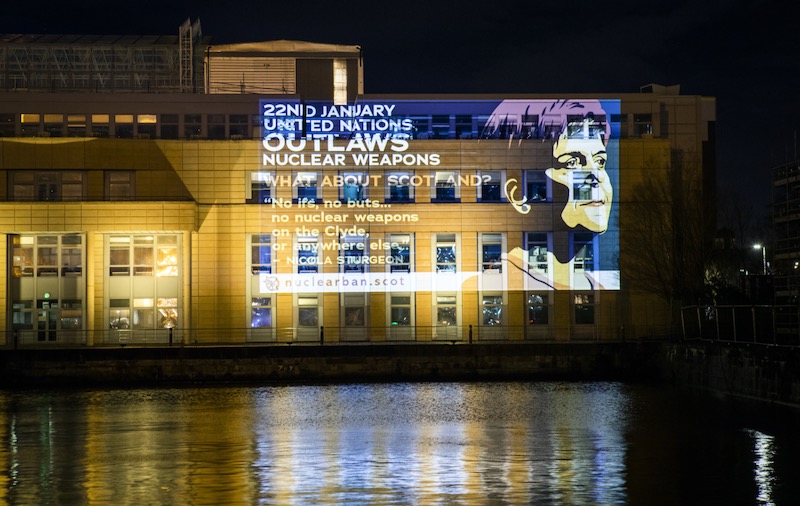 'No ifs, no buts, no nuclear weapons on the Clyde, or anywhere' was projected onto the Victoria Quay Scottish Government building in Leith, Edinburgh, to celebrate that the Treaty on the Prohibition of Nuclear Weapons (TPNW) enters into force as international law today.
Jane Barlow/PA

Church groups are celebrating the United Nations Treaty on the Prohibition of Nuclear Weapons that comes into force today.

Pressure is building now to urge the UK government to get rid of its Trident nuclear weapons system. However, none of the world’s nuclear powers are currently signed up.

The International Department of Catholic Bishops’ Conference of England and Wales and the Commission for Justice and Peace of the Catholic Bishops’ Conference of Scotland described the new treaty as “an historic milestone on the path to nuclear disarmament and an opportunity to refocus on genuine peacebuilding rooted in dialogue, justice, respect for human dignity, and care for our planet”.

Signatories were Bishop Declan Lang of Clifton, Bishop William Kenney, auxiliary in Birmingham, and Bishop William Nolan of Galloway. They urged support for the treaty repeated their call for the UK to “forsake its nuclear arsenal”.

Pax Christi here has led a witness at the Ministry of Defence in Whitehall against nuclear weapons for more than three decades. Bruce Kent, Vice President of Pax Christi and CND, would now like to see the UK government sign the Treaty, and also “nuclear-armed submarines returned to port and the separation of war heads from missiles, along with the cancellation of the current program for another generation of Trident nuclear weapons”.

He said: “The estimated £205 billion saved could be allocated to the NHS.”  Last November, the leadership of the Church of England called on the UK government to sign the historic treaty.

Patricia and Michael Pulham of the Christian Campaign for Nuclear Disarmament, who have campaigned on the issue since the 1980s, said: “Our world minus nuclear weapons would certainly be better, and this can be seen as a first step towards a great future.”

Christian CND said it was “proud to have been involved in these calls both in the UK and through our partnership with the International Campaign for the Abolition of Nuclear Weapons, which received the Nobel Peace prize for its work in 2017.”

The Network of Christian Peace Organisations offered clergy and Christian leaders two briefings last week ahead of the Treaty’s entry into force and practical steps to support the Treaty were discussed.  On Friday, the Network was due to host an online gathering to celebrate the entry into force with a Thanksgiving Service. It was to end before noon when church bells were expected to ring out across England, Wales and Scotland.

Members of Nonviolent Direct Action group Trident Ploughshares were due to celebrate the Treaty coming into force with banner drops, billboards and projections on buildings. In Edinburgh billboards will proclaim ‘UN outlaws nuclear weapons.’ The group wrote to Boris Johnson in December calling on the UK government to join the Treaty and disarm its nuclear weapons.