Religious believers must be able to give each other a hand and hug each other, Pope Francis said 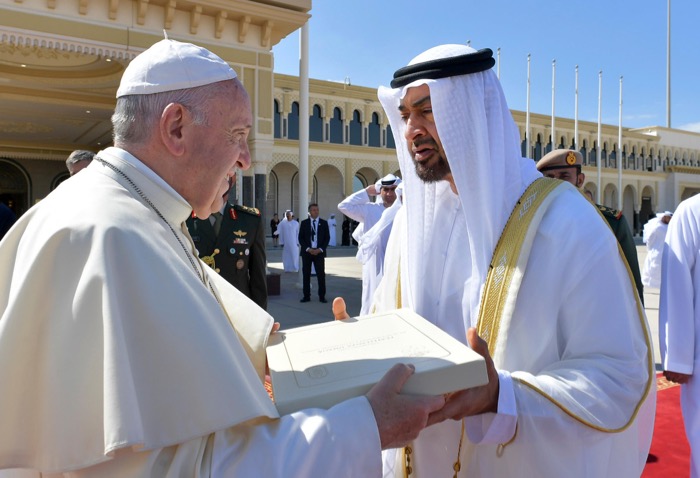 A failure to join forces will be a defeat for those who proclaim faith in God, he said.

The Pope was speaking on board his plane from Abu Dhabi to Rome and explaining why he signed a landmark agreement on interfaith co-operation with the Grand Imam of  Al Azhar, Dr Ahmed el-Tayeb.

“There is only one great danger in this moment in time,” he told journalists during his inflight press conference after a two-day visit to the United Arab Emirates, the first by a Pope to the Arabian Peninsula.

“Destruction, war, the hatred between us, and if we believers are not able to give each other a hand and hug each other, then our faith will be defeated. This document is born out of the faith in God, who is father to all, the father of peace. And it condemns all destruction, all terrorism.”

During his historic visit to the United Arab Emirates, the Pope and Dr Tayeb signed a declaration on human fraternity committing followers of Christianity and Islam to dialogue and peace-building.

On board the plane, Francis stressed the document was in keeping with the reforms and spirit of the Second Vatican Council, which produced a groundbreaking declaration on non-Christian religions and religious freedom.

He cited the council when asked by a reporter about his response to claims from some Catholic quarters that he was being manipulated, or used, by Muslims.

“Not only by the Muslims. They accuse me of being manipulated by everyone, even by journalists, it goes with the work,” the Pope joked. “But I want to say one thing clearly: from the Catholic Church’s point of view the document doesn’t move one millimetre from the Second Vatican Council, which is also quoted several times in the document. The document has been made in the spirit of the Second Vatican Council.”

He added that the joint document was reviewed by papal theologians, including the theologian of the Papal household, Fr Wojciech Giertych, a Dominican friar, and stressed it would be studied by Muslims in universities.

“If one feels bad I understand, this is not a thing of every day, but it's not a step backwards, its a step forward, a step forward which comes from 50 years, it comes from the council and has to be developed. Historians say that for a council to take root in the Church requires 100 years. We are half way,” the Pope said.

He went on: “that’s what attracts my attention also: I’ll tell you, I saw a sentence or a phrase, and I wasn’t so sure about this phrase, but it was a phrase of the council. And it also surprised me.

“Also in the Islamic world, there are different views, some more radical, others not. Yesterday in the council of elders, there was at least one Shi’ite, and he gave a very broad universal reflection. He spoke well. There will also be among them some discrepancies. But it’s a process, and processes mature.”

When asked about the conflict of Yemen, the Pope said he “found goodwill” for staring a peace process during his private conversations with UAE leaders including the Crown Prince of Abu Dhabi, Sheikh Mohammed bin Zayed al-Nahyan. The Emirates have been part of a Saudi Arabia led coalition leading attacks against Houthi rebel forces in the country.

“I know it is difficult to give an opinion after two days, and having spoken on the subject with a few people, and I can say that I found goodwill for starting the processes of peace. This I found,” the Pope said.

“The common denominator of the things I have spoken to on the situation of war, you mentioned that of  Yemen, I have found good will for starting processes of peace.”

Moving to his home continent of Latin America, 82-year-old Argentine Pope said he was willing mediate to find a solution to resolve the political crisis engulfing Venezuela.

Just before departing for the Gulf, a letter was sent to Francis by Venezuelan President Nicolas Maduro, although the Pope said he had yet to read it.

“We can see what can be done,” he told a Spanish reporter adding that he was “open” to helping to find a solution.

Holy See diplomats are understood to be working behind the scenes to try and broker a political settlement in a country that has seen tens of thousands of protesters on the street, hyperinflation and food shortages. The matter has become more urgent given Venezuelan politician Juan Guaido’s attempt to declare himself interim president of the country.

Two years ago seasoned Holy See diplomat Archbishop Claudio Celli had worked on trying to mediate a couple of years ago in a process involving the former President of Spain Jose Luis Zapatero of Spain. The Pope added that Cardinal Pietro Parolin, the Holy See’s Secretary of State and a former Vatican Ambassador to Venezuela, would be able to “explain all the different steps.” And he referenced Pope John Paul II's mediation to end the 1979 beagle channel border dispute between his home country of Argentina and Chile.

What was needed, however, was for both sides to come to the table.

“It needs to be both sides that ask for it. It was the case in Argentina and Chile,” Francis said. “ I will see what can be done, but the initial conditions are that both sides need to ask for it. And we are open to this.”

“It is the same when both sides go to the local priest because there is a problem between husband and wife. [Is one] coming or not coming? Someone wants it or doesn’t want it. Always [it must be requested or wanted] by both of the parties. This is the secret.”

Elsewhere in the press conference, he described the UAE as “an open country, not closed” and that Islam “is open to dialogue, to fraternity and peace.” He said that other Arab countries had invited him to visit but “there is no time this year”.

He added: “We will see next year. Either me or the next Peter.”