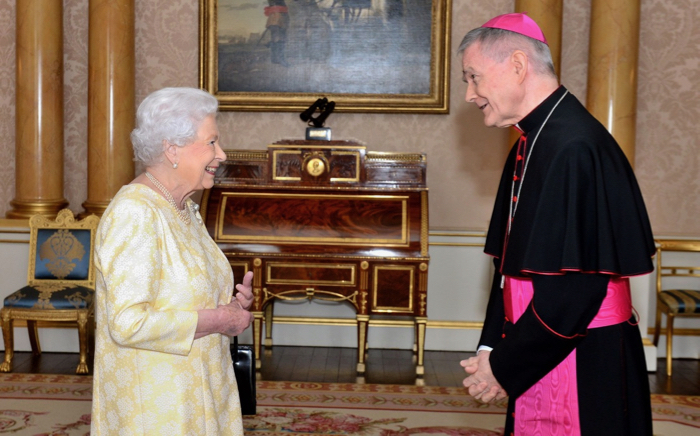 Pope's UK envoy fails to give evidence to abuse inquiry

by Christopher Lamb , in Abu Dhabi

'Muslims of the East and West, together with the Catholic Church ...declare the adoption of a culture of dialogue.' 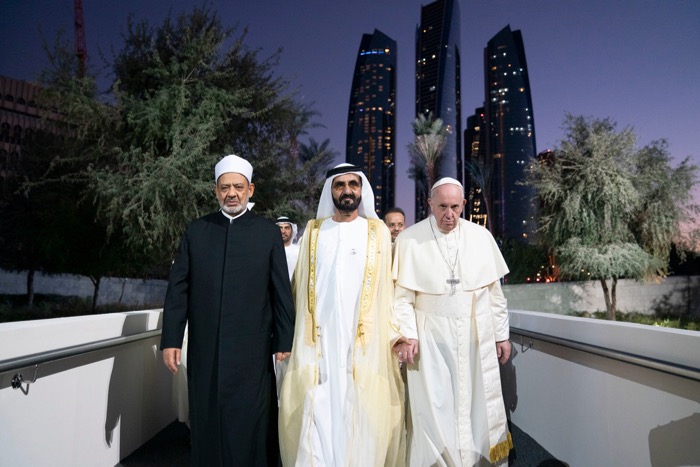 Pope Francis has offered an ambitious manifesto for the world’s religions by urging faith leaders to refuse any approval of war, find “paths of peace” and for Christian minorities to be given rights of citizenship in the Muslim world.

During a landmark speech on 4 February at an interfaith conference in Abu Dhabi, the Pope took on the mantle of a religious statesman by calling for faith leaders to work for the “demilitarising of the human heart”.

Following his address, the Pope and the Grand Imam of Al-Azhar, Dr Ahmed el-Tayeb, the leading authority for Sunni Muslims, jointly signed a declaration condemning religiously-inspired violence and committing followers of Christianity and Islam to dialogue and peace-building. It was a bold attempt to debunk the perception that religion fosters conflict, violence and division.

Along with their joint agreement, the Pope, Dr el-Tayeb and the Emirati authorities signed an agreement to build a new church and mosque in Abu Dhabi in honour of the papal visit. The new Church of Saint Francis and Mosque of Grand Imam Ahmad el-Tayeb will be constructed in order to build up inter-faith dialogue.

Significantly, the declaration calls for “full citizenship” to be given to Christians and Muslims wherever they live, while during his speech Dr el-Tayeb said Christians must be welcomed as citizens. The Holy See has long lobbied for Christian minorities in the Middle East to be granted citizenship rights, so often denied to them.

The 82-year-old Roman Pontiff, whose trip to the United Arab Emirates is the first by a Pope to the Arabian peninsula, used his address to explain it was impossible to honour God without cherishing the “sacredness of every person” and that religions had an urgent task to deepen reconciliation between divided elements of the human family.

To start with, it means refusing to approve armed conflict, something that has scarred the Gulf region over recent decades.

“The arms race, the extension of its zones of influence, the aggressive policies to the detriment of others will never bring stability. War cannot create anything but misery, weapons bring nothing but death,” Francis told the gathering of around 400 religious leaders including imams, rabbis and cardinals, who sat together on rows of white cushions.

The Pope arrived at the interfaith event with the Grand Imam of Al Azhar and while walking hand-in-hand with the Prime Minister of the UAE, and leader of Dubai, Mohammed bin Rashid Al Maktoum.

“Human fraternity requires of us, as representatives of the world’s religions, the duty to reject every nuance of approval from the word ‘war'," he said in a speech delivered in Italian at the Founders Memorial, in Abu Dhabi, built in honour of UAE’s founding father, Sheikh Zayed. "Let us return the word, 'war', to its miserable crudeness. Its fateful consequences are before our eyes. I am thinking in particular of Yemen, Syria, Iraq and Libya.”

The war in Yemen has threatened to cast a shadow of the Pope’s visit as the UAE are part of a Saudi Arabia-led coalition in the war against Houthi forces in the country. Before departing for Abu Dhabi on Sunday he called for an urgent observance of the Yemen ceasefire reached in December, and for its people to receive food and medicines.

On trips abroad, the Pope tends to avoid sensitive topics concerning an individual country, and his decision to directly address the question in Yemen contrasted with his choice Myanmar, when he decided not to use the word “Rohingya” when talking about the humanitarian crisis concerning the Rohingya Muslims in the Rakhine state. Before travelling to Myanmar, he had been advised not to use the word.

Francis’ speech was the major set-piece address of his 3-5 February Emirates visit where he has surprised hosts by his low-key style. In the opulent surroundings of Abu Dhabi, where sheikh’s palaces neighbour towering skyscrapers, the Pope's choir of a simple mode of transport – a small Kia car – was striking to UAE observers.

During his speech, the Argentinian Pope referenced his namesake, St Francis’ of Assisi, the 13th-century friar who dedicated his life to poverty and peace. Francis recalled that it was the 800th anniversary since St Francis had undertaken a mission to meet with Sultan al-Malik al Kamil, in Egypt during the crusades. “We are here to desire peace, to promote peace, to be instruments of peace,” he said.

Dr el-Tayeb was keen to echo the peace message when he spoke to the interfaith gathering. Earlier, he accompanied the Pope during a meeting of the Muslim council of elders at the Sheikh Zayed Grand Mosque. The council was established by el-Tayeb in 2014 in order to promote peace in Muslim communities.

The Grand Imam told the interfaith meeting that a false interpretation of religious texts in Islam is being used to justify violence while denouncing terrorists as “murderers”. Speaking in Arabic, he added that it was wrong to see Islam as a religion which was a threat to civilisations, an idea that Dr el-Tayeb had flourished following 9/11.

He described the Pope as a “man of compassion”, said Muslims should remember that Christians are “full of goodness and mercy”.

The peace message was echoed by the Pope. In continuity with his recent predecessors, Francis has repeatedly called for armed conflicts to be solved through mediation and dialogue, and has even indicated that he might take a new look at the Church’s long-held teaching on just war theory.

“Together, as brothers and sisters in the one human family willed by God, let us commit ourselves against the logic of armed power, against the monetisation of relations, the arming of borders, the raising of walls, the gagging of the poor; let us oppose all this with the sweet power of prayer and daily commitment to dialogue,” Francis explained.

The Pope quoted from “Nostra Aetate”, the Second Vatican Council’s declaration on other religions – “we cannot truly call on God, the Father of all, if we refuse to treat in a brotherly way any man, created as he is in the image of God” – while adding that young people, so often surrounded by fake news and negativity, will judge the generation “poorly” if they are left “only mirages and the empty prospect of harmful conflicts of incivility”.

As inspiration for religious leaders, Francis offered the image of the transformed desert, pointing out how his Emirati hosts had turned what was once a dry and barren land into a global melting pot of industry and nationalities.

“With farsightedness and wisdom, the desert has been transformed into a prosperous and hospitable place,” the Pope explained in a reference to the growth of the UAE, an oil-rich federation of Emirates, founded as a country in 1971.

“From being an unapproachable and inaccessible obstacle, the desert has become a meeting place between cultures and religions. Here the desert has flourished, not just for a few days in the year, but for many years to come.”

In the desert, Francis went on, a “way of fruitful development has been opened which, beginning from the creation of jobs, offers hope to many persons from a variety of nations, cultures and beliefs.”

But he warned that this path would be thwarted by individualism or a desire to one group above another.

“Religious behaviour, therefore, needs continually to be purified from the recurrent temptation to judge others as enemies and adversaries,” he said.

The Jesuit Pope explained that education and justice were at the heart of building peaceful and fair societies, and cited the work of Catholic schools in the UAE and the Arabian Peninsula. Tackling religious extremism in education has also been a priority for the Emirates.

“A fraternal living together, founded on education and justice; a human development built upon a welcoming inclusion and on the rights of all: these are the seeds of peace which the world’s religions are called to help flourish,” said Francis. “For them, perhaps as never before, in this delicate historical situation, it is a task that can no longer be postponed: to contribute actively to demilitarising the human heart.”

The Pope also used his speech to reflect on religious freedom, which he  said is more than worshipping but seeing “in the other truly a brother or sister, a child of my own humanity whom God leaves free.”

He said he looked forward to the time in the Middle East when “people of different beliefs” can “have the same right of citizenship” and that only in the” case of violence in any of its forms is that right removed.”

Becoming a UAE citizen as a migrant worker from the Philippines or South India – from where most of the almost one million strong Catholic community is drawn from – is widely seen as impossible.

Nevertheless, the UAE is one of the most religiously tolerant countries in the region, and the Pope praised the Emirates in his speech for their “commitment of this nation to tolerating and guaranteeing freedom of worship, to confronting extremism and hatred.”

When he met with the Crown Prince of Abu Dhabi at the Presidential Palace on the morning of Monday 4 February, he was given as a present the 1963 deed of gift for the land where the first Church in the UAE was built.

The behaviour of believers, the Pope stressed, continually needs to be “purified from the recurrent temptation to judge others as enemies and adversaries,” and must speak out for the forgotten. He also thanked the recent organisers of a forum on child dignity in the digital world and pledged "support, solidarity and participation and that of the Catholic Church, in this very important cause of the protection of minors in all its forms."

The Pope said: “Each belief system is called to overcome the divide between friends and enemies, in order to take up the perspective of heaven, which embraces persons without privilege or discrimination.” Religions should be the voice of the least, who are not statistics but brothers and sisters, and should stand on the side of the poor. They should keep watch as sentinels of fraternity in the night of conflict.”

Tomorrow, the final day of the Pope’s visit will see him celebrate a Mass for more than 100,000 Christians in the UAE before flying back to Rome.