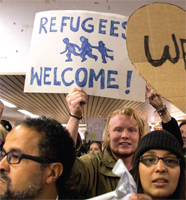 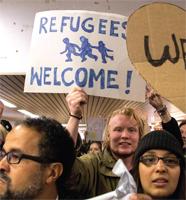 The response of many Europeans to the plight of refugees arriving on the continent’s shores is one of solidarity, a principle at the heart of the original European project, inspired by Catholic Social Teaching. But while the people embrace solidarity, the politicians appear to have forgotten it

This has been a week of startling images. A tiny body washed up on a shoreline; fathers holding aloft their children and the now void train tickets that they believed would carry them to safety; football fans holding banners proclaiming welcome; exhausted migrants pouring off trains in Germany to applause.

It is now – finally – impossible to ignore this humanitarian crisis. It is also impossible to have missed the paradox inherent in the simultaneous surge of solidarity shown to arriving migrants by ordinary Europeans and the unprecedented pressure on the mechanisms of European cooperation designed originally to institutionalise solidarity. Angela Merkel noted gravely “if Europe fails on the question of refugees, its close connection with universal civil rights will be destroyed”.

This European civil vision is tied umbilically to Catholic Social Teaching. While the practical mechanisms for post-Second World War European cooperation were focused on trade and production, and industrial and welfare provision, the beating heart of the project was moral: “A community of peoples deeply rooted in Christian basic values,” in Robert Schuman’s words. It was not formal constitutional theory but a fusion of French social modernism and Catholic Social Teaching that formed the basis of cooperation and later union, with the animating vision of human relations provided by the twin tenets of solidarity and subsidiarity.

The principle of solidarity in Catholic Social Teaching is anchored in a view of human nature as fundamentally cooperative and interdependent. Evil results when we turn away from that co-dependent, co-creative and co-responsible nature. It is anchored in the way Jesus Christ through his life, death and resurrection draws us into a new relationship with each other. This view of solidarity is also rooted in a belief in the Spirit who inspires and renews solidarity between people.

It is easy to see how such a vision relates to a call to neighbourly love. But solidarity has a wider structural, political purchase of particular relevance to this current crisis. Papal encyclicals emphasise that local, national and global social inequality threaten the conditions necessary for social solidarity. This must be countered by new forms of social cooperation and solidarity’s completion will be found in civil society. The images from Munich of the state and civil society working hand in hand speak powerfully to this vision.

Pope Francis has offered his own unique articulation of solidarity and has spoken often of the particular and urgent need for solidarity with forced migrants. His approach has been explicitly theological. Standing on the Italian shoreline, amid migrant boats, he talked about sin and solidarity, saying that the sin of Europe is to fail to be rightly oriented towards the needs of the stranger.

He argues that we settled Europeans risk becoming the disorientated, in contrast to the orientation of desperate migrants on the move. Learning how to express solidarity, initially to weep with the dispossessed, not only meets human need but re-orientates us towards all that is good for us: God.

Turning such Catholic social vision into practice in the current crisis has fallen in particular to the members of the Jesuit Refugee Service and Caritas Europa. Its French arm, France Secours Catholique, as well as working with migrants, is asking the Government to consider the following: quotas to allow a just burden sharing in Europe, relieving the pressure on southern and eastern nations; for the Dublin Convention to be rethought so that migrants can choose which country they wish to seek asylum in, according to their family ties, language and economic skills; and a call to enable quick integration of migrants through an immediate right to work. These calls notably echo the calls of migrants themselves. Utterly frustrated by the lack of safe and legal routes, forced migrants are pushing back – or perhaps more literally surging forth – against the inhumanity of the Dublin system. They are refusing to be fingerprinted as they arrive, refusing to stop when faced with barbed wire fences and security forces at border crossings, and demanding access to trains when they hold tickets.

But these migrants are protesting not just against pan-European structures but are also passing judgement on the failures of national asylum and border management systems as mechanisms of solidarity. Migrants are refusing to claim asylum in and moving on from countries where legal and political provisions are deemed to be failing. There is a complex breakdown of national and regional elements of the European solidarity project regarding protection and asylum. It feels as if there is a mass insurgency against legal and political systems perceived to lack justice – and which thwart the orientations towards family and civic participation and integration that Catholics see as basic to natural law.

These are structural causes of dysfunction at the heart of the European system and it is partly why Caritas agencies understand that advocacy work is as urgent and important as practical aid. Catholic organisations have both the experience of working directly with migrants and local host communities, and access to the intellectual traditions of Catholic social thought – that same tradition that provided both the political models and theoretical vision that shaped the origins of the union.

But the most striking expressions of solidarity do not come from professional agencies. In the recent past, renewal of the European project has come from gifted, visionary individuals who have typically combined a strong Christian faith and political vision. This time, shoots of renewal seem to be emanating from civil society – although animated in part by the leadership of an East German pastor’s daughter, Angela Merkel.

In his recent encyclical on the environment, Laudato si’, Pope Francis describes the political task of civil society as the generating of a spirit of compassion. The manifestation of forms of social love characterises its sometimes unwelcome and disturbing gift to the political order.

On 20 August, Home Secretary Theresa May and her French counterpart signed a new Security Agreement for Calais. The agreement, while noting humanitarian elements of the current crisis and reaffirming that asylum remains important, placed much greater emphasis on policing, security and strengthened border control. This is surely the image of a sclerotic Fortress Europe, for which there can be little Christian justification. To many groups working with migrants this is Europe as the tired, old woman of whom Pope Francis spoke in his address to the European Parliament.

On 19 September, civil society groups, co-ordinated by CalAid and Secours Catholique among others, will meet in Calais to hold a French-British rally and sign what they are calling a Solidarity Agreement. This is a deliberate and highly symbolic repudiation of the Anglo-French Security Statement in the name of organised European citizens, aiming to show the kind of moral imagination that they believe more resonant with the heart and soul of the European project.

In 2010, the year of his death, Schuman said of the New Europe: “[It] cannot and must not remain an economic and technical enterprise; it needs a soul, the conscience of its historical affinities and of its responsibilities in the present and in the future, and a political will at the service of the same human ideal.”

The “Christian” civic task is therefore perhaps less to lament the loss of a founding vision, or overly worry about words and their meaning, and more to ask some careful questions about our present European situation and its relation to the Gospel, to discern the call and action of the Spirit in this moment and to act accordingly. And perhaps in turn such faithful action might just provide the impetus for the renewal of increasingly broken European political and economic structures.

Dr Anna Rowlands is lecturer in contemporary Catholic theology and deputy director of the Centre for Catholic Studies at Durham University.