Essential service to children and state

Cardinal George Pell was never the most popular man in Australia, not even among his fellow bishops – which means it was extraordinarily shrewd of Pope Francis to put him in charge of the Vatican’s finances. They were in such a mess, and in such a need of a shake-up, that only somebody prepared to tread on toes and who was not too bothered about being popular would be equal to the pressure. That it is a style that has shocked some and made enemies of others is apparent from the attempt at character assassination – anonymous and spiteful – that surfaced in an article in L’Espresso magazine. It insinuated that Cardinal Pell could not even handle his own finances, let alone the Vatican’s.

Accusations of extravagance and suggestions of a luxurious lifestyle were slapped down by a statement from the Vatican’s chief press spokesman, Fr Federico Lombardi, as “direct personal attacks that should be considered undignified and petty”. It was also denied that Pope Francis had called the cardinal in to rebuke him. No such meeting had taken place, a statement from the cardinal’s office said, and the Secretariat for the Economy over which he presided was operating well within budget. The statement concluded: “Finally and for the record, Cardinal Pell does not have a cappa magna.” To insult a cardinal properly, one needs to suggest he flounces around in yards of scarlet silk, as the Vatican gossips had tried to do.

The impression of a Pope at war with his own civil service, or at least significant parts of it, is heightened by the terms of the new decree, a motu proprio, which gives Cardinal Pell responsibility for virtually all financial activity in the Vatican. This is a revolution, as many departments enjoyed centuries of autonomy with virtually no outside supervision. The list of financial practices that will be tightly regulated, and abuses that will be exposed, amounts to a damning portrait of the situation that had been allowed to develop.

The new accountancy and auditing regime will be open to inspection by the Council for the Economy of the Holy See under Cardinal Reinhard Marx, with Cardinal Pell as head of the Secretariat for the Economy. Both will work with an auditor-general, a new and powerful position that will presumably be occupied by a qualified lay person.

The new auditor’s office will investigate – without having to give warning in advance – any activities that deviate substantially from approved budgets; irregularities in accounts or records; irregularities in the awarding of agreements or contracts for outside services or in the carrying out of transactions or disposals; and acts of corruption, embezzlement or fraud. There could be fireworks ahead.

Through Cardinal Pell, Pope Francis has once again proved himself as tough as he is gentle, and strengthened his grip on the Vatican Curia. But it is essential, if these reforms are to work, that as much as possible should be on view to the outside world. The Vatican has still some distance to go to regain international trust as a reliable financial operator. Maximum transparency is the only way forward.

Firstly, for those who don't believe that George Pell wears a Cappa Magna...
http://www.andrewcusack.com/2005/09/05/cappa-magna-sighting/
Secondly, I endorse your observations. Only someone like Pell could be tasked with the job of cleaning up the financial affairs of these agencies. He is far safer there than he was here dealing with the victims of clerical sexual abuse.
We Australians find it most humourous and delightful to see the Pope task Pell with these duties. We think the pope has a wonderful sense of humour.

Interesting, upbuilding editorial. Since about ten years, I mentioned the bad state of the Vatican System that I percieved, in the Flemish equivalent of The Tablet: Tertio. The topical reforms and other news have proven my intuition right. When this "Augia's stable" will be cleaned, I presume the Catholic Church will be ready to develop a lot more soul power, worldwide. Our bereaved people, and all in search for inspiration, deserve that so much.

The Vatican lost the plot years ago, it is not fit for purpose and engages in antics totally alien to to the church's founder, Jesus Christ. And the two popes who let this all happen on their watch well-demonstrate that they were totally unsuitable to lead the church. We need wider participation in the election of a pope, involving bishops, priests and, dare I say it, lay people. 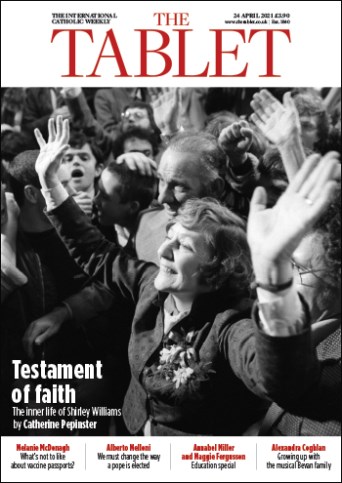