Will an interfaith call for peace in the Middle East be heard?

“An archbishop, a rabbi, an imam and an ayatollah walk into a church,” sounds like the start of a bad joke but it’s actually a reasonable description of Wednesday’s vigil for Iraq outside Westminster Abbey.  The day after yet another Western journalist was murdered by the forces of the so-called Islamic State, it was good to see faith leaders standing shoulder to shoulder and condemning the murder and mayhem being played out across our screens.

With reports of sectarian violence starting to occur on the streets of Britain the Church of England and humanitarian agencies Christian Aid, Islamic Relief and Jewish World Relief decided a powerful statement of intent was needed to condemn the acts of terrorism perpetrated in Iraq by people claiming to act out of their faith in God.

We had only a week to pull everything together so we were delighted that British faith leaders were so eager to work together and put their names to the event. The main challenges were not theological but logistical, trying to secure a suitable location (which was kindly provided by Westminster Abbey) and ensuring all the bases were covered. 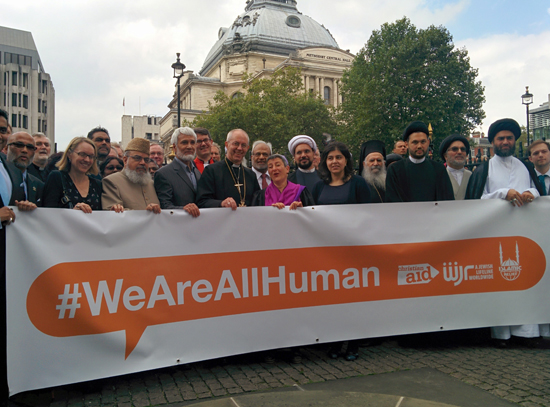 The power and reach of such events is of course dependent on who gets to see and hear them.  It was great to see the nation’s media packed in with their banks of cameras to capture what was being said and interview the speakers afterwards.  Proof enough of the influence and relevance of faith in our secularised modern country.  Hopefully you’ll have heard the words of peace from the lips of faith leaders on the radio or seen them standing together in solidarity with the banner #WeAreAllHuman.  If this message can spread across the UK then it will have been worthwhile. Who knows, it may even be heard beyond our borders as far as the people of the Middle East.