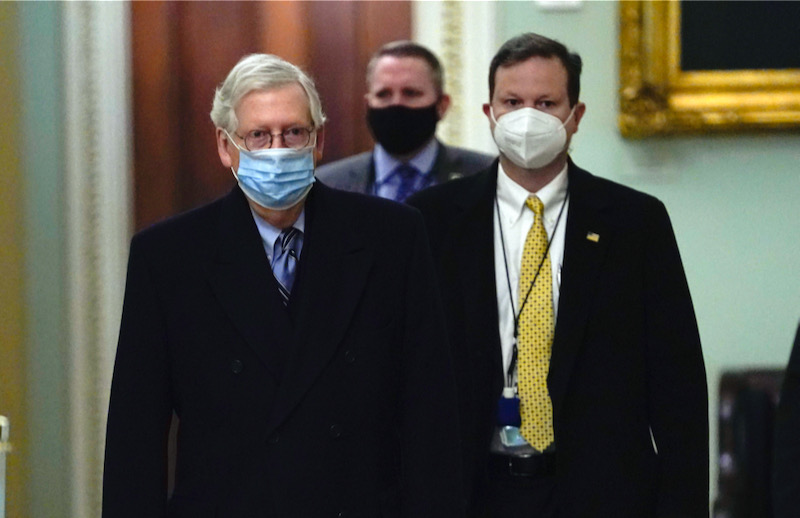 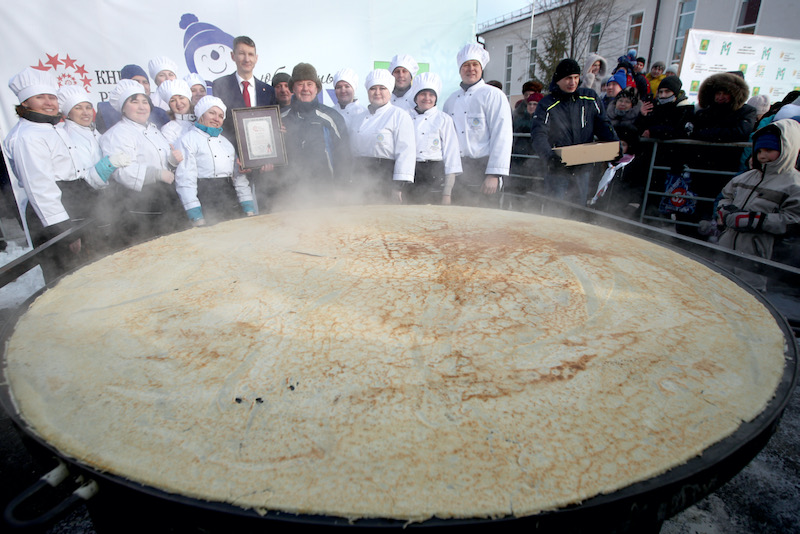 Cooking can be a great way of creating memories, as this team of Russian chefs demonstrated with their record-breaking pancake this month.
Yegor Aleyev/PA

How do we remember people? This year, Holocaust Memorial Day occurred at more or less the same time as the official confirmation that the Covid death toll in the United Kingdom had passed the 100 000 mark. The numbers of course do not compare, but each individual death is a total, complete event and it is difficult for our minds to compute such multiplication, even in a much smaller number. So many lives lost, so much history, so much tragedy, each death an utter break for the family, the group of friends, a full stop in human terms. Holocaust Memorial Day is a shared, community act of remembering, shocking but necessary. Reaching this numerical landmark in the pandemic seems to call for some form of recognition. How do we handle memory, and commemoration? Do they help us cope with loss?

Learning about loss is something we all grow into as time passes. I’ve heard people declaring that this is a good reason to have pets, so that children learn to practise how to cope with loss. We had pets when I was little, and I don’t remember it being particularly helpful; the goldfish died so often that we didn’t really get upset. My next brother and I had one each, and we moved the name onto the next fish like American generations (Finny III, Tommy IV). When we got too far out of synch, Stephen called his goldfish something different until mine caught up (and vice versa, mine didn’t always die faster).

In the next generation, we couldn’t have pets when our children were little, because we were crossing borders too often in the days before pet passports, but we didn’t feel the children were missing out (captive goldfish were no longer regarded as a good thing, so their guaranteed mortality was no longer an advantage). Grandparents and friends had dogs and cats, which the children were happy to deal with, but never showed any signs of hankering for, and I’d rather have a baby than a puppy any day, the conversation is so much better.

In any extended family, loss which you are personally aware of arises naturally. People die when their time comes, and this is I suppose practice of a sort, but nothing can really prepare you for the death of your closest family and friends. Luckily for most of us, we work up slowly through different degrees of closeness (family friends, great-aunts, grandparents and so on) before we have to handle the loss of a parent, a partner or a child. These remain unthinkable until we have to confront them, and I don’t think you can ever feel prepared in any way which would remove the pain, and after all you would not want to. It’s more important to remember, even if it hurts.

How do we remember? That becomes vitally important as soon as someone has died, and it’s a very personal thing. Your memories will not be the same as your sibling’s, even, any more than your relationship was the same. Death stops a relationship at a definite time-point, but it doesn’t automatically discharge any pent-up feelings (and it doesn’t necessarily make them any easier to deal with). With the people we dearly loved, remembering starts out as acutely painful but should ripen into happier feelings.

Mementoes obviously help you to remember (the clue is in the name), but I find that it’s just as much other things that suddenly jolt your memory. Things like the odd bits of paper that you find in a book. I find it almost impossible to throw away bits of my parents’ handwriting, even if they don’t say anything important, and some scraps are pure gold: I recently found a little scrap of paper inside one of my mother’s books, which has a doodle, some phone number she must have wanted to jot down, a scribble to make a pen write and the date and time Mary was born, with her name and birth weight. I deduce that this was the note of my husband ringing my mother to tell her of Mary’s arrival, and it is now very precious to me, as it clearly was to her (that’s why she had kept it).

In a messy drawer in the back porch, there is an old margarine box with a collection of assorted, rather rusty screws. I can’t throw it away, because it has a large sticky label on it where my father has written: “Screws and spares for Edmund (Christmas train), also wooden wheels and chimney.” I know the long and complicated backstory about making a wooden train (with a large instant coffee tin as the round bit on the front of the engine),  and leaving a few special holes that Edmund and his grandfather could do together to finish it off. This sort of thing is memory made tangible. I don’t even know where the train is (it must be either in the attic or in the Adam-and-Eve cupboard, I think), but it was green with black fittings, like a Hogwarts train, and much loved.

Some things we keep because they come with a family story attached, even if the story has holes in it because the original source isn’t there any longer to keep the story straight. It doesn’t matter so much what the things are, the story is more important. We have a large heavy brass snake in our fender, and we also have two brass trays, because my mother said they all had to stay together. They are relics from her own father’s childhood in India. The snake once had a tongue, my mother said, but it was broken off years before it even came to her. That is all I know. I remember my grandmother polishing them with Brasso, with broadsheet newspaper laid out to protect the table, when I was little. Nowadays they don’t get polished much, but the snake is one of the things which reminds us all of my parents’ home, and being there with them.

I haven’t got any objects to remember some of my beloved people by, but I have discovered that a recipe can be highly effective. Cooking often leads to being sidetracked by memory, because I keep cards and poems from the children in my cookery books as well. Not all my recipes are from friends who have died, but baking is a good time to remember someone and think about them. For a while now I have always included the name of the giver in a recipe, and it is an excellent way to keep a memory green. Hildegard was in charge of the First Communion programme when I joined the team. She once brought a cake to one of our planning sessions. She was Austrian, and the cake was slightly unusual, so I asked for the recipe. She is dead now, but “Hildegard cake” is something we make several times a year (I’m not sure why the possessive got dropped, but that’s what we call it). My lemon drizzle cake is my dear friend Audrey’s version, and whenever I make it I remember her and her husband  (he died soon after she did). I smile to remember, I say a prayer, and we all get to eat cake. It’s a good way to be remembered.

Sometimes the cake almost outlasts the memory; I regularly make Christine’s chocolate cake, a family favourite, but I can no longer remember Christine’s second name; she was someone I worked with briefly in my twenties. I hope she’s healthy and happy. I never cut up a pineapple without thinking of my friend Nadiya, who couldn’t eat cakes or biscuits but liked pineapple, so I always chopped one up if she was coming round.  She also gave me a wonderful Clafoutis recipe. Unfortunately it’s difficult to get bottled or frozen cherries in current circumstances, so I have it filed under “N” until I can shop more widely again; but I think of my friend whenever we eat a pineapple.

Once I had a chance to ask an American friend’s mother-in-law about American measures, because I find doing butter in cups difficult. She told me that she always used a bigger measure than specified, added a measured amount of water, and then put the butter in bit by bit until it was full. Then she threw away the water. I thanked her, and told her I would remember her whenever I did it that way. She laughed, and told me I’d made her shiver, at the thought of how far a casual remark could reach. I like to think of it as a chain of women passing recipes and techniques down through the ages. My rice pudding is my grandmother’s recipe, and her grandmother’s before her. I don’t know how far back the chain of hands goes. I remember my grandmother making it often, which my father liked because he loved rice pudding (my mother was not so keen). All my children except one like it, and he truly detests it. This is Edmund (of the train), one of the two who is not in the household at the moment, so we can make rice pudding without worrying, but conversely it also makes me think of him. They made him eat it at school once, even though he warned them that he would be sick. And so he was, not in a triumphant way, but simply following through on the logic of the situation (I know my boy). I miss him, but I remember him acutely when we have rice pudding.

People are already beginning to think about how we can commemorate the human toll of the pandemic. We seem to need some public marker for so much grief which has had to be swallowed privately during this time of restricted funerals, and the impossibility of visits and hugs to express sympathy. I hope the churches will be central to planning and carrying out such a commemoration, because they are far more sure-footed in dealing with mourning than any government can be. What we need is for all of us to recognise the losses that so many of us have suffered behind closed doors. At the moment, each household has to operate as an island, but as John Donne reminds us: “No man is an island […] every man’s death diminishes me.” He wrote that after suffering a severe illness in an epidemic, and nearly dying himself. Once it is safe again, we will need to build bridges to join all the islands together again. People talk about the “work” of grief. Memory and commemoration are an important part of it.