Following the Pope's commission to strengthen partnerships during Covid-19 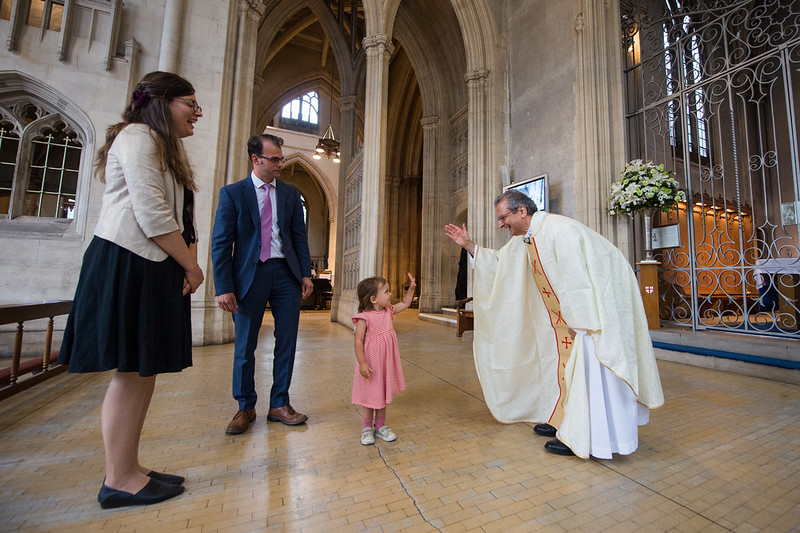 The future lies with the people: a photo from the recent ordinations to the priesthood for Archdiocese of Southwark
Mazur/cbcew.org.uk

One of us felt that Mass in South London last week was like Czechoslovakia in the 1980s. Hardly anyone attended last Sunday. So much space was there between individuals that markers on the pews (for social distancing) were hardly needed. The priest did everything: lone introit, prayers, readings, the eucharist. People prayed silently, or responded evenly. Communion was reverent – even if the government had instructed us in how to stretch out our hands. People departed in their ones and twos back into a secular world.

An underground mass in the Czech lands could be like that under Communism. Catholicism had been easier to persecute in the Czech lands than in Poland – even than in Slovakia – because by then there was no well-established Catholic tradition there. The Czech lands were already secularised and in the fifteenth century they had been the earliest European territory to depart from the Church in “Reformation”. Two centuries before the Battle of the White Mountain (1620), Bohemia had known Jan Hus.

Or to see it another way: the austerity which Catholics had to observe in secret under Communism was already the kind of Christianity for which Czech sympathies had survived longest. It had nothing to do with power and everything to do with the powerless. A Taizé evening in a private home secretly on a Friday night did not smack of Hapsburg empire and did not trumpet pomp or ceremony. There could be no complex bureaucracy of lay and extraordinary ministers. Many priests and their bishops had to be worker-priests because they had to pretend to be workers, not priests.

Perhaps the most striking thing that the recent Mass and the remembered Mass had in common was this: the element of fear had been restored (fear of infection in our current context). Clearly the few who came back this week in South London had really wanted to be there. The fear of the Lord – the respect proper to the things of God. People did what they were commanded to do and left as quickly as they could, to comply with the government’s instructions. Skipping the ritual sign of the peace was part of something in which we felt somehow more together, not less.

Of course, the origins in each case are different. The UK government has been restricting then regulating Mass for public health reasons, not tyrannical ones. In Czechoslovakia, shutting down associations independent of its control had been its direct intention. That is not to say that the futures for each case may not converge. What starts as quarantine does not necessarily end up in freedom of religion. No one knows when regulation of worship will end, and in the UK it has not seemed urgent to ask if it will end. The Czech situation would never recur because today there is no need for it; under Hong Kong’s new security law there is no need to allow Mass only at 5 am or to tail the attenders. Their phones will do the walking for the spooks.

Yet in the UK, this disruption to Mass has not, perhaps, been a bad thing, either. There was no bourgeois ennui about the Mass we attended. That had been stripped away. This Mass had a solemnity and intensity that came from its singleness of aim. Mastering the fear of contagion did not outweigh trying to get your kid into the better school. Not everyone felt they must come. Sheer force of habit has been levered off by the lockdown.

It is not that the Church has become a “bare, ruin’d choir”; this may be an opportunity for its renewal. After all, such phases have occurred before. When Franciscans came as missionaries to the Hebrides in the late seventeenth century, the islanders they came to convert came to them instead, having kept the Faith but having seen no priest for decades. What decides the outcome for the Church of events such as these is the response of the people.

One verse we have learned to chant, and feel comfortable with, is John 12:24: “Unless a grain falls into the ground and dies, it remains alone; but if it dies, it produces much wheat.” Often we spiritualise this and in our minds convert “death” from actual death into a death of ambition or some other minor ending we can deal with. Not even those who recognise that this verse is the Gospel can avoid the sense of Gethsemane when it comes to the real, enforced end.

When people first were told to stay at home, perhaps it was a moment from the Upper Room. Now that people are being coaxed and eased back, perhaps it is a moment from the catacombs. And if that is the case, a return to the old normal or trying to re-live the Constantinian triumphalist phase, from the fourth century or the nineteenth, may not be the right thing to do. Perhaps the good way will be to keep the smaller, more intense church with its singleness of purpose and its potential for purity of heart; a Mass in God’s love and mercy as fons et origo. Only then could much wheat be produced.