The Pope will be choosing his words carefully this week 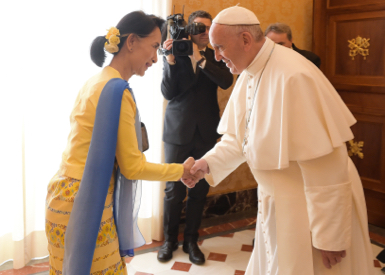 On board his plane from Rome to Yangon – formerly known as Rangoon - Pope Francis made light of the 32 degree heat that would greet him in Myanmar. “They say it’s too hot,” he told the reporters travelling with him. He might have used the same phrase to describe the political situation on the ground. The first papal visit to this spellbinding South East Asian country is taking place amid accusations that its army is responsible for the ruthless ethnic cleansing of its Rohingya Muslim people.

The Pope has repeatedly raised the terrible plight of the Rohingya – calling them his “persecuted brothers and sisters” - but has been strongly advised by the Archbishop of Yangon, Cardinal Charles Maung Bo, and local church leaders not to use the “R word” during his stay. This is what might be described as Francis’ “Pius XII dilemma”. The dark cloud that will always hang over Pope Pius is the accusation that he should have spoken out more boldly against the Nazis’ mass murder of Jews, rather than relying on behind the scenes efforts to help save as many of them as possible from the slaughter. For the Jesuit Pope in Buddhist-majority Myanmar the terrible choice is between public condemnation of the country’s leaders, risking a violent backlash against religious minorities, or trying, as he might say, to build bridges rather than walls with the authorities.

The Holy See has recently established formal diplomatic relations with Myanmar, where Catholics make up just 1.3 per cent of the population. The Pope’s first official meeting with the country’s leaders after his arrival was with Myanmar’s top military brass, led by senior commander General Min Aung Hlaing. In a break with normal protocol, this “courtesy visit” took place before his meeting with the country’s president, Htin Kyaw, and the de facto leader Aung San Suu Kyi. The Nobel laureate Suu Kyi has been excoriated for her failure to speak out against the army’s systematic campaign against the Rohingya; on the day the Pope arrived in Myanmar she was formally stripped of the Freedom of the City of Oxford, where she was once a student. But while she is taking much of the blame for the crisis, the military, which ran the country between 1962 and 2011, have never completely relinquished control.

In his speech on Tuesday to Myanmar’s authorities in the capital on Tuesday, the Pope took a diplomatic approach. There was no mention of the Rohingya but instead a call for peace and national reconciliation built on “commitment and respect for human rights”. The impact of a Papal visit is often less about what is actually said than the gestures and body language and sheer presence. Francis’ decision to visit Myanmar is in itself a sign of his willingness to offer a personal contribution to the solution of a humanitarian crisis: it would have been far easier for the 80-year-old Pope to stay at home in the Vatican. And the Bangladesh leg of his journey, where he will meet representatives from the Rohingya community, will give him an opportunity to talk more explicitly about their persecution. 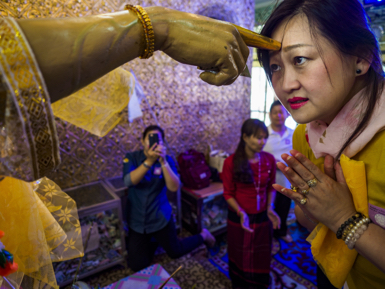 Rudyard Kipling’s poem “The Road to Mandalay” and George Orwell’s novel Burmese Days are reminders that the country once known as Burma has long been a place of exotic beauty that has captivated outsiders. The legacy of British colonial rule is clear to see here in Yangon, where I have noticed a road called the Strand, a Kipling’s Bar and a Savoy Hotel. But the skyline of the city is dominated by the gold stupa of the Shwedagon Pagoda, the most sacred Buddhist site in the country. It is 2,500 years old, holds relics of the Buddha and is made out of gold plates, while the top is encrusted with diamonds.

Soon after our arrival, the journalists travelling with the Pope were given a tour of the site, which includes eight different spots in which to pray, named after the days of the week (Wednesday is split into morning and afternoon). As we walked barefoot around the complex our guide informed us that you pray at the place dedicated to the day when you were born. We were told of a Buddhist tradition which recommends the ideal marriage partner according to the day of their birth. Tuesday and Thursday are apparently an ideal match. This led to a flurry of journalistic inquiries into the day they and their other half were born and then a series of questions about whether they were well matched. Our guide tactfully replied to every nervous query:  “Don’t worry, those two days are OK.” 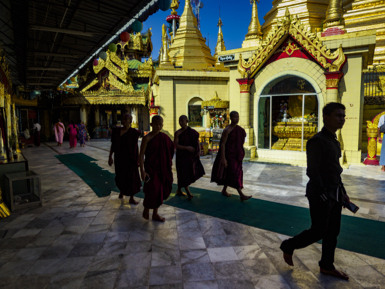 The Shwedagon Pagoda has a quiet, peaceful atmosphere. There are lots of candles, people kneel in prayer and a steady stream of Buddhist monks in maroon robes stroll past. There are 500,000 monks in Myanmar - and 75,000 nuns - with some remaining in the monastic life, while others merely take on the robe for a limited time. Some Buddhist monks are accused of stirring up hatred against Muslims. The most prominent is Ashin Wirathu, once described as “The Face of Buddhist Terror” on the front cover of Time Magazine.

At the pagoda I talk to 19-year-old monk, Naing Win, who had joined the religious life just two weeks ago. He was happy about Pope Francis’ visit, although he added that he was concerned about a “Muslim takeover” in Myanmar. “We are open to other religions but worried about terrorism,” he tells me.

Pope Francis will be choosing his words carefully this week. 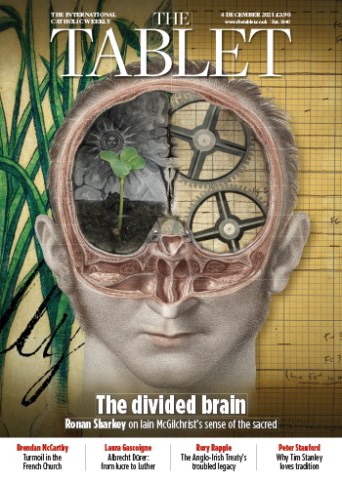