Big business has much to gain by going green, says Washington's Cardinal Wuerl

Ahead of Pope Francis' much-anticipated "green" encyclical, Washington Cardinal Donald Wuerl was at the Vatican this week taking part in a conference entitled '"The New Climate Economy: How Economic Growth and Sustainability Can Go Hand in Hand". He said caring for the environment was the issue of our day, and Francis' teaching on the subject has been a development of  that of previous popes. Although the US has been reluctant to agree to cutting carbon emissions, Wuerl said that businesses have "much to gain" by ensuring economic growth does not take place at the expense of sustainable development

As we discuss the new climate economy, two elements play an important role in assessing the Church’s reflections: context and continuity.

Pope Francis reminds us that, “When we talk about the environment, about creation, my thoughts go to the first pages of the Bible, to the Book of Genesis, where it says that God put men and women on the earth to till it and to keep it (cf. 2:15)” (General Audience, June 5, 2013). We have then to ask ourselves what does cultivating and preserving the earth mean and are we truly caring for creation? 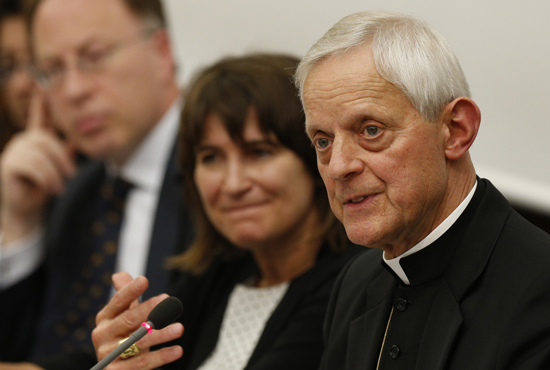 Our Holy Father also cites Pope Emeritus Benedict XVI who called us to the task of appreciating the logic of creation and what it means to see the bond between the caring dominion of creation, the recognition of the profound dignity of each human being, the flourishing of creation and the individual as intimately tied together.

The teaching of Pope Francis and his efforts to address the environment are in harmony with those of his predecessors. The Church always tries to read the “signs of the times” and offer appropriate guidance by setting the issues of the moment in the context of Catholic Social Teaching. This approach is found in Pacem in terris of Saint John XXIII at the height of the Cold War. Blessed Paul VI recognized the particular social and political changes of his day when he wrote Populorum progressio and Saint John Paul II presented Centesimus annus precisely as a reminder of the Church’s longstanding social teaching in a period of great societal transition particularly in Europe. Pope Emeritus Benedict XVI wrote Caritas in veritate specifically combining fraternal and economic development, the environment and the development of people and technology.

Now Pope Francis is guiding the Church to watchfulness for an urgent “sign of the times”, a new awareness that the human family, if it is to thrive, is being called to a deeper solidarity on behalf of the environment. In doing so, he is also reminding us of the beauty of Creation and our own dignity as its stewards, entrusted by the Creator to nurture and protect that creation for the sake of our whole human family and for generations to come.

Another great “sign of the times” today is surely the issue of sustainable development which Pope Francis presents as both human and environmental ecology. Approaching the environment with greater wisdom is at the heart of our gathering today, particularly by emphasizing the coherence and compatibility of facing global climate change with the need for economic growth in all nations, especially developing ones.

As the human family strives to recalibrate its relationship to the environment, the Church has an important role to play. Admittedly it is not in judging scientific questions, many of which remain unanswered definitively – including the analysis of the nature and extent of humanity’s contributions to climate change. Rather the Church’s role, as in many other complex and prudential decisions made in the economic and political arenas, is in proposing moral parameters within which any equitable and effective solution should be judged.

The United States Conference of Catholic Bishops, through its Committee on Domestic Justice and Human Development, its Committee on International Justice and Peace, and its Office of Domestic Social Development, has already called attention to global climate change and the need for the U.S. Church and all citizens to address in more depth this issue and its potential ramifications.

Three principles stand out as deserving special attention as we examine the Church’s role in economic, scientific, cultural and political arenas.

The first principle is the dignity of the human person, whose inherent worth and immortal destiny is the very rationale for environmental action. Economic development has to have as a point of reference the sustainable well being of future generations.

The second principle is an emphasis on the moral imperative to protect the natural order. Pollution, desertification, deforestation, water shortages, the forced displacement of whole populations by the depletion of resources, and climate change itself all have had profound effects on the members of our human family, especially the poor, and we cannot sit idly by without attempting to reverse the trend. We are not just bystanders in these decisions that will determine the quality of life for generations to come.

The third principle is, in a sense, the immediate conclusion of the previous two. It is also the theme of this seminar: that protecting the environment need not compromise legitimate economic progress. At the same time we must recognize our grave duty to hand the earth on to future generations in such a condition that they too can worthily inhabit it and continue to cultivate it (Caritas in veritate, n. 50). There is an increasingly clear harmony between efforts on behalf of the environment and those that promote integral – including economic – human development. This is the “human ecology” to which our efforts must contribute.

The need for sustainable development solutions is both a moral imperative and an economic incentive as a business issue. To take it up courageously is pro-business. Government has a role, and we clearly need strong international agreements. But in moving ahead, business and economic interests necessarily play a significant role. We need to harness that wisdom and creativity in the service of the common good. Such collaboration aligns private and public interests, and reduces the gap between the privileged minority and the world’s great majority.

The Church has always taught that profit is licit, but business must also serve the common good and pursue justice. A new climate economy should prioritize sustainability (justice and solidarity between peoples and across generations), as today’s theme states: economic growth and sustainability must go hand-in-hand.

Businesses large and small have much to contribute and much to gain. It is surely in our tradition to look to free enterprise for creativity in developing the “engine” (energy) of a more climate-friendly and sustainable economy, both domestically and internationally. We look forward to good news about the new climate economy.

Cardinal Wuerl gave the above address at the Vatican on 20 May 2015 in a conference entitled 'The New Climate Economy: How Economic Growth and Sustainability Can Go Hand in Hand'