Prince of Wales' speech to Chaldean church in London: jihadists' online beheading videos could take us back to dark ages

Hell has touched us: read the archbishop of Sydney's homily at a Mass for victims of the terrorist siege

Mass for Victims of Siege at Martin Place

Introduction for Mass for Victims of Siege at Martin Place

Today with Christ and His people I offer the Sacrifice of the Mass for the victims of the recent siege in Martin Place and their families, commending their souls to Almighty God and praying for eternal rest for them; for the injured and traumatized, praying for healing for them; for the survivors and police and emergency workers who assisted them, praying in thanksgiving; and for our civil society, its leaders and members, praying that this terrible day past does not mar the spirit of our community going forward. 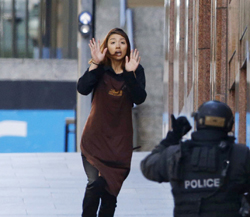 I welcome His Excellency the Governor-General of Australia, Sir Peter Cosgrove, and Lady Cosgrove; the Hon. Malcolm Turnbull and Mrs Lucy Turnbull, and other federal leaders and staffers; Mr Christopher Sullivan, representing His Excellency the Governor of New South Wales, General David Hurley; the Premier of New South Wales, Hon. Mike Baird, who has led us through this crisis with such wisdom and integrity; the Deputy Premier Hon. Tory Grant; the Treasurer, Hon. Andrew Constance; the Attorney-General, Hon. Brad Hazzard; the Transport Minister, Hon. Gladys Berejiklian; the Education Minister, the Hon. Adrian Piccoli; the Minister for Planning and for Women, Hon. Prue Goward; Minister for Finance and Services, the Hon Dominic Perrottet and other state MPs, leaders and staff; representatives of the Police, Emergency and Medical Services who served us so well this night and day past; members of the judiciary and legal professions; and other leaders of our city. I welcome also representatives of the media and the general community.

I invite continuing prayer for peace, healing and generosity to our neighbours after this tragic event, in solidarity with people of all faiths in our blessed city of Sydney and country of Australia.

Mass for Victims of Siege at Martin Place
Homily

We are not used to hearing words like 'siege', 'terrorist', 'hostages' and 'security forces' associated with our city. Yet for the past day and night we were subjected to pictures and sounds we tend to associate with alien lands. In a café only two blocks away from St Mary's Cathedral, only one block away from the Supreme Court, even closer to the New South Wales Parliament, the Reserve Bank and the Channel 7 studio, hostages were pinned for hours against the windows and forced to hold up a flag which blasphemously used the name of God as a threat. The distress was visible on their faces, as was the relief of the first five to escape. We went to bed hoping to wake to good news. But despite patient efforts to maintain calm and negotiate there were, in the early hours of this morning, flashes of gunfire, intervention by our police to save lives, merciful escapes, but finally death. Hell had touched us.

Only history will tell how much 16 December 2014 will affect our attitudes, behaviour, life-style. But today Archbishop Anthony Fisher OPe deaths of two innocent 'hostages' along with their tormentor, the injuries of four others and trauma to many more, the paralysis our city has experienced this day past. One of the deceased was Katrina Dawson, a mother of three young children and gifted barrister, presumably on her way to chambers for another day's service of her clients. The other, Tori Johnson, was the young manager of the café, likewise intent on serving his customers. And the third was Sheik Man Haron Monis the perpetrator of this nightmare. Much is still unclear about him, his motivations and affiliations, and we must avoid too quickly jumping to conclusions and pointing fingers.

We are used to living in a peaceful, tolerant, secure society in which people may enter a café and order a hot chocolate without fear: I've been a customer at the Lindt Chocolat Café myself more than once. For such ease of living, such assumptions of safety, to be so radically challenged can be disorienting and harden our hearts. The risk is that we become cautious, cynical, suspicious of our neighbours, or worse, that we turn on them. In the process we undermine what we most love about our Australian way of life.

Christmas is around the corner and we have had a Christmas crib with well-lit Christmas trees, and a very beautiful laser light show projected upon the façade of the cathedral every night. But last night it was in darkness. That is true to reality, as it is often is, true to the Gospel. In the middle of all the romance of Christmas, the astonishing Good News of God-made-man for us, the angels, shepherds and wise men adoring, the Gospel report that all was not quite as it ought to be. There's suspicion about the pregnancy; the husband considers divorcing his wife; a mother nearing labour is required to travel a great distance; there's no room at the motel for them; the child is delivered in the squalor of a cowshed; in the Temple the proud parents are warned of trouble ahead; the family must flee as refugees to a strange land; meanwhile the King's men kill the rest of the little children…

So the backdrop to the Light who will dawn for us at Christmas is in fact darkness. The Way, the Truth and the Life comes to people who often lose their way, to a civilisation sometimes more comfortable with lies than truth, to what is often a culture of death more than of life. The Christ is threatened from the moment of His birth until the violence of this world finally catches up with Him on the cross. And our world today is every bit as mixed up as it was at the first Christmas. There's plenty of talk of human rights, the dignity of the person, equal respect and care. We are replete with resources, technology and know-how to help people through troubled times. Yet innocent people are threatened the world over and a little bit of what is commonplace in the region of Christ's birth has even come to Martin Place. Christmas, we think, is supposed to be different - but in a sense it was always like this.

Yet we Christians believe that the Babe of Bethlehem is the Prince of peace, God-with-us, God-one-of-us, God-saving-us. So why, if the Prince of Peace has come, do these terrible things keep happening? Perhaps the answer is in the first Christmas carol, when the angels sang "Glory to God in the highest and peace on earth to those of good will." The God who saves still leaves men free. They choose whether to be of good will or not. The Christ-child proposes peace, again and again; He gives us the wherewithal to be reconciled and live peaceably with our neighbours; but in the end we choose whether to live in His kingdom, by His values.

Is the joy, love and peace of Christmas really possible? Or do we have to adopt a more 'realistic' posture, more cynical and self-protective? Do we have to buy into the endless cycles of violence and recrimination? Do we have to take our own hostages? Reports have emerged this morning of the heroism of the male victim of the siege. Apparently seeing an opportunity, Tori grabbed the gun. Tragically it went off killing him, but it triggered the response of the police and eventual freedom for most of the hostages. Reports have also emerged that Katrina Dawson was shielding her pregnant friend from gunfire. These heroes were willing to lay down their lives so others might live, imitating the sacrifice of Christ who said that there is no greater love than to lay down one's life for each other (Jn 15:13). Now spontaneous tributes are appearing in Martin Place and on the internet. Leaders of all religious, political and ethnic backgrounds are calling for calm, for prayer, for support for each other. Services are being offered for the victims, their families and friends. The darkness need not overcome the light. Indeed, the Christmas-Easter-Christian message is: it cannot! There is something greater than hatred and violence. There is Love, that humble, self-donative Love that comes in the shape of the Christmas Babe, the Prince of Peace. He can soften the hardest hearts. He can convert the most hardened sinner. Come Prince of Peace. Come, O Come, Emmanuel.

Above: A hostage escapes the café. Photo CNS/Reuters

Archbishop Anthony Fisher is incorrect in this statement. Hell had already touched us in Australia in the form of pedophile abuse of children and famiies by clergy and religious.
At the time of the visit to Australia by Pope Benedict XVI it was Fisher who decided to denigrate the Fosters who had experienced the abuse of both their daughters by Clergy.
He is reported to have told them in so many words to stop winging and go home.
He didn't realise or want to accept the fact that "Hell" had already arrived for families and it was brought to them by the Roman Catholic Church and its leaders.
There is no joy ever in this life for families who have had a member abused by Clergy and/or Religious.
Until Fisher actually does something to show his understanding of the "Hell" the abuse has inflicted on families as well as the breaking of trust there will be no peace.
It seems that he is very big on issues that he cannot control but "abuse of children by his Church"?
Too hard basket.