Good Friday homily: we are all capable of betraying Jesus, warns papal preacher

Pope Francis in his Easter Urbi et Orbi address prayed for a ceasefire in Syria and for government and rebel fighters there to never "again use deadly force" against civilians. He also prayed for victims of violence in Iraq and for the success of negotiations between Israelis and Palestinians. He prayed for an end to violence in the Central African Republic, in parts of Nigeria and in South Sudan, and for an end to unrest in Ukraine and in Venezuela, where the Vatican is to mediate in peace talks.

Francis called for an end to hunger "aggravated by conflicts and by the immense wastefulness for which we are often responsible", and drew attention to the plight of the vulnerable - "especially children, women and the elderly" - migrants fleeing religious persecution and victims of the Ebola epidemic in West Africa. 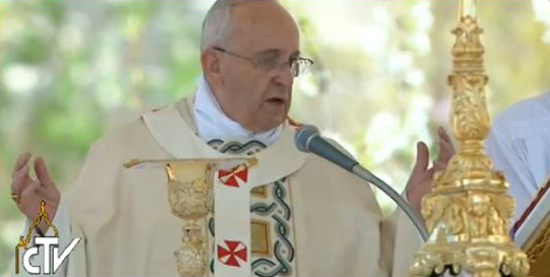 Dear Brothers and Sisters, a Happy and Holy Easter!

The Church throughout the world echoes the angel’s message to the women: “Do not be afraid! I know that you are looking for Jesus who was crucified. He is not here; for he has been raised… Come, see the place where he lay” (Mt 28:5-6).

This is the culmination of the Gospel, it is the Good News par excellence: Jesus, who was crucified, is risen! This event is the basis of our faith and our hope. If Christ were not raised, Christianity would lose its very meaning; the whole mission of the Church would lose its impulse, for this is the point from which it first set out and continues to set out ever anew. The message which Christians bring to the world is this: Jesus, Love incarnate, died on the cross for our sins, but God the Father raised him and made him the Lord of life and death. In Jesus, love has triumphed over hatred, mercy over sinfulness, goodness over evil, truth over falsehood, life over death.

That is why we tell everyone: “Come and see!” In every human situation, marked by frailty, sin and death, the Good News is no mere matter of words, but a testimony to unconditional and faithful love: it is about leaving ourselves behind and encountering others, being close to those crushed by life’s troubles, sharing with the needy, standing at the side of the sick, elderly and the outcast… “Come and see!”: Love is more powerful, love gives life, love makes hope blossom in the wilderness.

With this joyful certainty in our hearts, today we turn to you, risen Lord!

Help us to seek you and to find you, to realise that we have a Father and are not orphans; that we can love and adore you.

Help us to overcome the scourge of hunger, aggravated by conflicts and by the immense wastefulness for which we are often responsible.

Enable us to protect the vulnerable, especially children, women and the elderly, who are at times exploited and abandoned.

Enable us to care for our brothers and sisters struck by the Ebola epidemic in Guinea Conakry, Sierra Leone and Liberia, and to care for those suffering from so many other diseases which are also spread through neglect and dire poverty.

Comfort all those who cannot celebrate this Easter with their loved ones because they have been unjustly torn from their affections, like the many persons, priests and laity, who in various parts of the world have been kidnapped.

Comfort those who have left their own lands to migrate to places offering hope for a better future and the possibility of living their lives in dignity and, not infrequently, of freely professing their faith.

We ask you, Lord Jesus, to put an end to all war and every conflict, whether great or small, ancient or recent.

We pray in a particular way for Syria, beloved Syria, that all those suffering the effects of the conflict can receive needed humanitarian aid and that neither side will again use deadly force, especially against the defenseless civil population, but instead boldly negotiate the peace long awaited and long overdue!

Jesus, Lord of glory, we ask you to comfort the victims of fratricidal acts of violence in Iraq and to sustain the hopes raised by the resumption of negotiations between Israelis and Palestinians.

We beg for an end to the conflicts in the Central African Republic and a halt to the brutal terrorist attacks in parts of Nigeria and the acts of violence in South Sudan.

We ask that hearts be turned to reconciliation and fraternal concord in Venezuela.

By your resurrection, which this year we celebrate together with the Churches that follow the Julian calendar, we ask you to enlighten and inspire the initiatives that promote peace in Ukraine so that all those involved, with the support of the international community, will make every effort to prevent violence and, in a spirit of unity and dialogue, chart a path for the country’s future. On this day, may they be able to proclaim, as brothers and sisters, that Christ is risen, Khrystos voskres!

Pope Francis gave the above address in Rome on Easter Day, 20 April, 2014.