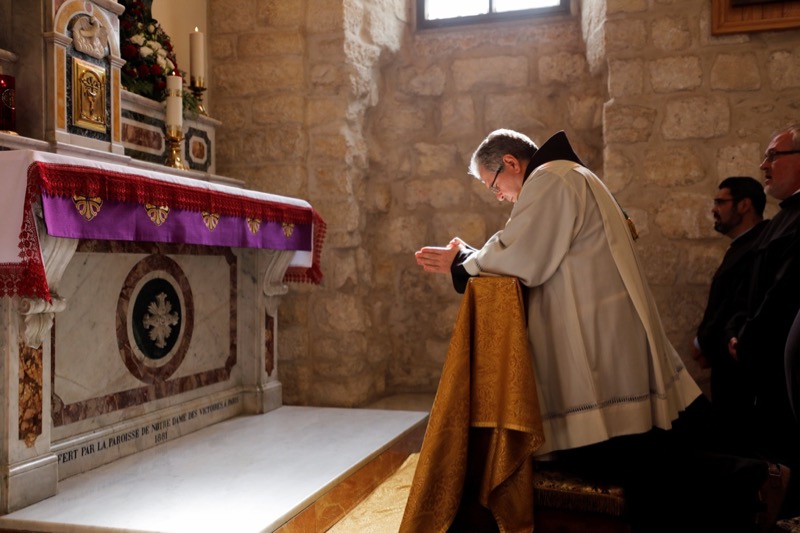 In Advent, we affirm our faith that we have a future

Only by entering the wilderness, can we begin to acknowledge Truth

The contrast in the opening verses of this gospel between, on the one hand, a roll call of power and status – Emperor, Governor, Tetrarch, Pontiff – and, on the other, the stark, ascetical figure of John the Baptist, is deliberately drawn by Luke.

He is making crystal clear from the very beginning that the Gospel, the Good News, originates not in the palaces of potentates or places of learning, not even in places of worship, but in the wilderness, the inner as well as the outer wilderness.

Both wildernesses, the inner and the outer, are demanding places, where cherished illusions, especially about ourselves, are impossible to sustain. Solitude makes a nonsense of all our masks and camouflages and especially our claims to selfsufficiency, leaving us inwardly naked. In complete solitude, we can’t but be conscious of the gap between what we’ve become by our own choices and what we were made to be by God’s choice.

In the solitude of our inner wilderness, we’re forced to come to terms with ourselves as we are, as opposed to how we’d like to be or how we’d like others to think we are, or how others would like us to be. Little wonder that for many, perhaps only recently discovered during Lockdown, solitude is unbearable, to be avoided at all costs. But, however painful or uncomfortable, it’s only by entering the wilderness within that we are in a position to acknowledge the truth, not just the truth about ourselves, but Truth Itself.

In that inner wilderness, we have no choice but to acknowledge and confront our needs, weaknesses, temptations, and failings; but precisely in that confrontation we encounter God. Because it is only in that primal act of honesty that are our hearts and lives are prised open, so that God, in his infinite courtesy, is enabled to make his presence felt, precisely in the space that to us might seem like emptiness. The book of Revelation expresses it exquisitely: “Behold, I stand at the door, and knock. If anyone shall hear my voice, and open to me the door, I will come in to him, and will sup with him, and he with me.”1 That’s the invitation that John the Baptist offered those who, doubtless out of curiosity, came out, to the wilderness of Judea to see and hear him.

He invited them to enter into their own inner wilderness, in order to “prepare a way for the Lord.” Preparing a way for the Lord is what John means by ‘repentance’. Repentance involves getting rid of a lot of clutter that would hinder God’s entering in – principally our sins; but it also involves shedding our illusions, especially the crippling illusion of self-sufficiency, and the drive within all of us to be in control. The first stage of repentance, then, is to give up our futile struggle to be in control at any cost, both of our own lives and those of others. The first fruit of always wanting to be in control is anxiety; and it’s anxiety, along with petty mindedness and lack of imagination, that lies at the root of most of our sins. It’s an obviously vicious circle, isn’t it? We want to be in control, because we’re anxious about what might happen to us if we’re not; but being permanently pressured to exert complete control, brings in its wake perpetual anxiety.

As a consequence, many of us spend most of our time, consciously or unconsciously, seeking to calm that anxiety - by seeking to be in control. Quite apart from the vicious circle into which it drags us, seeking always to be in control inevitably distorts our judgment about everything and everyone, leading us to rate ourselves and others by the degree of control we, or they, manifest in titles, position, power and possessions. Everyone becomes a rival.

Little surprise, then, that our Lord tells us again and again, in the Sermon on the Mount, for instance, about the utter futility of seeking always to be in control: “Do not be anxious about what you shall eat and drink and wear… which of you by being anxious can add one cubit to his span of life?”

Instead, he tells us to seek first the Father's kingdom and its goodness, and all anxiety will fall away. To repent, then, is to change our whole modus operandi: it is to give grace a chance, rather than supplanting God’s providence in a bid for power and control. In practical terms, to repent is, first and foremost, to give up being anxious about tomorrow.

And think of the difference that would make to all our lives: no longer would we feel the need to horde our possessions and fight all comers to keep them; no longer would we fret about our reputation and do anything to preserve it; no longer would we need to win every argument or get our own way every time. Instead, we would know and enjoy freedom, true freedom, the freedom of God’s sons and daughters, at home in his creation, safe under his providence. One of the oldest parts of the Mass is a prayer to be delivered not just from all evil but also from all anxiety, “as we await the blessed hope and the coming of our Saviour, Jesus Christ”: a perfect prayer for Advent, as long as you remember that Advent lasts all of life.