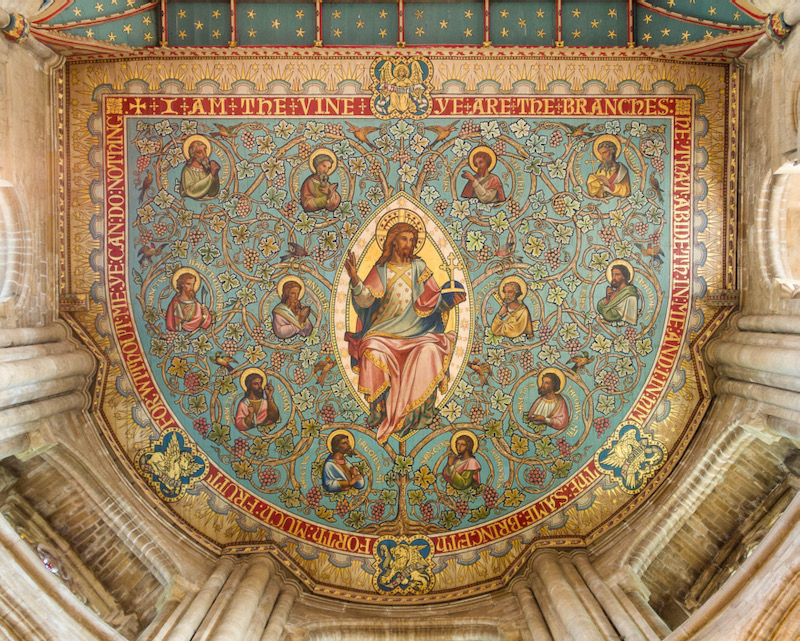 'I am the Vine.' A sermon by Fr Alban McCoy OMF Conv 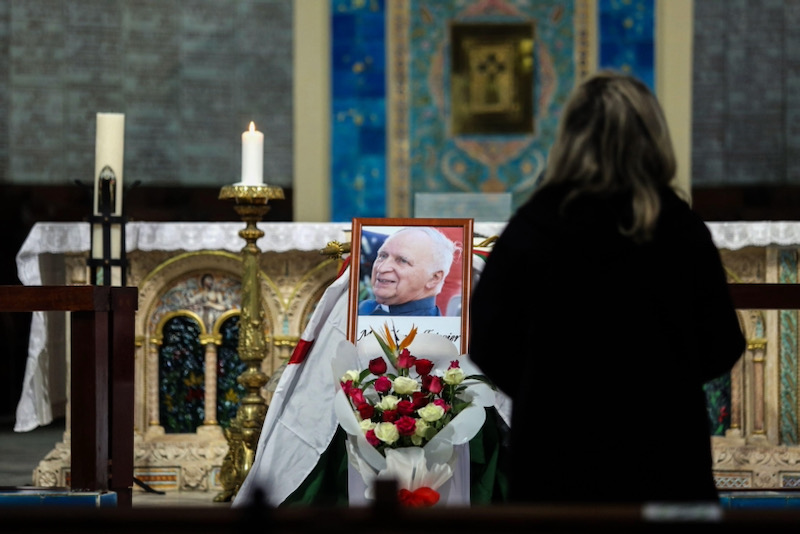 A woman pays her respect in front of the coffin of the late French-Algerian Archbishop Henri Teissier during his funeral service at the Cathedral of Notre Dame d'Afrique.
Farouk Batiche/dpa/Alamy

The Archbishop Emeritus of Algiers,  Mgr Henri Teissier, died at the age of 91 in Lyon on 1 December 2020.

His love affair with Islam and the Muslim world began in 1946 when his father, a French army officer, was posted to Morocco. Throughout his long life Henri remained faithful to this love. In lockdown in Lyon, much of the final year of his life was spent writing a book about the Emir Abdelkader, the Algerian Sufi mystic and freedom fighter who opposed the French takeover of his country in the 1830/40s. The Emir, the spiritual father of the modern Algerian nation, longed for better relations between Christians and Muslims. He wrote in 1850: “If Muslims and Christians had only listened to me I would have put a stop to their quarrelling. They would have become outwardly and inwardly brothers.”

Like the Emir Abdelkader, Archbishop Henri Teissier was also a man of God and a peace maker. I first became aware of the existence of Henri Teissier when The Tablet published an interview with him on 25 January 1997. I was struck by his courage and commitment to the tiny, beleaguered Christian community and to the Algerian people as they faced the ruthless violence of a civil war.

When Archbishop Teissier celebrated the fiftieth anniversary of his priestly ordination in 2005, the tribute paid to him on that occasion by André Barakat struck me as summing up very well the person I had come to know. André found Mgr Teissier’s humility and sincerity touching: “You are present to each one of us, knowing each by name and always finding a consoling word, which reminds me of Jesus’ words in the Gospel of John: ‘I am the good shepherd; I know my sheep and my sheep know me and I call each one by name’. Your dynamism and attentiveness witness to your faith as do your speech and smile which fill the heart of every person who knows you.’’

André failed, however, to mention another notable quality of Mgr Teissier, his playful sense of humour. A gifted linguist, Archbishop Teissier spoke fluent Arabic and had a good command of several other languages, including English. For a time, he even taught Arabic to some Algerian secondary school students.

Henri was a man possessed of incredible energy and enterprise. He had the ability to inspire others by his confidence in them. As one Algerian told me: “Mgr Teissier listens to you and gives you the key to find your own solution to the problem which you have brought him.”

He also had an uncanny ability to put people in touch with others of similar interests or with people who could help them. An unpretentious person, he lived simply in the Diocesan Centre, eating with retreatants and joining in with the washing-up.

Henri Teissier was born on July 21 1929 in Lyon, the second of eight children. He studied for the priesthood at the Séminaire des Carmes in Paris and was ordained priest for the Archdiocese of Algiers on 25 March 1955. He began his priestly ministry in Algiers during the Algerian war of independence (1954-62), remaining there until his appointment as bishop of Oran on 2 February 1973. Subsequently he was translated to Algiers in 1981 as coadjutor to Cardinal Duval and, following the Cardinal’s retirement, Henri succeeded him in 1988.

During his time as Archbishop, in 1992, a bitter civil war broke out, claiming the lives of nineteen priests and religious, eighteen of whom lived in his Archdiocese.

A man easily moved to tears, Henri experienced much anguish at the death of these religious, one of whom was his close friend, Pierre Claverie OP, Bishop of Oran. He retired in 2008 at the age of 79.

Before Algerian independence in 1962, the Catholic Church was overwhelmingly a Church of the coloniser: French, Spanish, Italian and Maltese. It was to undergo what Archbishop Teissier described as “three stages in the death of a Church”. Firstly, there was the mass exodus in 1962 of 800,000 European settlers after the country gained its independence. Secondly, in 1976 Church schools (which educated 45,000 Muslims) and hospitals were nationalised by the socialist government. The third “death” occurred between 1993-1996 when the GIA (Armed Islamic Group) issued an ultimatum to all foreigners to leave the country by 1 December 1993 or face execution. Some priests and religious left, as well as most of the remaining foreign Christian families and native Algerian Catholics, but many religious and priests also stayed on out of solidarity with the suffering Algerian people.

At the end of this third “death”, there remained a tiny remnant of about 3,000 laity and 300 priests and religious. Out of these “deaths” new life and new hope slowly emerged. The Christian mission in Algeria is lived out in weakness. And Mgr Teissier saw this as in some ways a blessing for the Church because it has allowed her to draw closer to the Algerian people.

Archbishop Teissier didn’t see the role of the Church as being that of a chaplaincy to diplomats and other non-Algerians. He saw it rather as a Church at the service of a Muslim people through its student libraries, literacy and women support groups and other social projects; a Church of encounter where the Holy Spirit is active in people of goodwill, whether they be Christian or Muslim, bringing in the Kingdom.

These daily relationships between Muslims and Christians are what the Algerian Church likes to call “sacraments of encounter”, outward signs of the transforming power of the Holy Spirit. Perhaps the key contribution of Mgr Teissier, and the Algerian Church, to the worldwide Church has been its understanding of interreligious dialogue. In fact, as Mgr Teissier pointed out to me, the Church in Algeria prefers the word encounter to dialogue: “There is a certain ambiguity in the word ‘dialogue’. It suggests academic or university discussions, colloquiums whereas with the word ‘encounter’ one can easily see that it is a question of a relationship between persons, some of whom are Christian and some Muslim. We like to use the expression the ‘sacrament of encounter’ to say that in this encounter God gives us something through each other. We, as Christians, receive something from our Muslim partners which is a gift of God for us; and we think that they also receive a gift of God which comes through what we are, our Christian identity.”

Mgr Teissier worked hard for the beatification of the nineteen Algerian martyrs. His dream came to fruition in Oran on 8 December 2018 when a large crowd of Christians and Muslims came together to give thanks for the lives of the martyrs. Their beatification was undoubtedly the crowning moment of Mgr Teissier’s life. He saw this ceremony as a means of honouring not just the Christian victims of violence but also all those innocent Algerians who had lost their lives in the bloody civil war (1992-2002). In their statement announcing the beatifications, the Algerian bishops wrote: “They are witnesses to a fraternity which knows no frontiers, to a love which makes no distinctions.” And this promotion of fraternity between Christians and Muslims was, for Henri Teissier, at the heart of his understanding of the Gospel message. Mgr Teissier, who took out Algerian citizenship in 1965, was much loved by the Algerian people. On his retirement as Archbishop in 2008 the daily newspaper, Le Quotidien d’Oran, wrote: “Henri, our brother, has lived through crucial periods in the history of the country when it would have been so easy to lose one’s way. He has been on the side of justice, on the side of Muslims who were trying to escape from colonialism. That is why we say to Henri Teissier, the Oranais, the Algérois, the Algerian, we love you, brother, stay among us.”

In December the Algerian ambassador to France, His Excellency Mohamed Antar Daoud, gave a eulogy at his funeral Mass in Lyon. And, despite Covid restrictions, the Algerian government arranged for the repatriation of his body so that he could be buried in Algerian soil. Today Henri Teissier’s body lies in the Basilica of Our Lady of Africa, overlooking the bay of Algiers. On the apse of the Basilica one can read the words: “Our Lady of Africa pray for us and for Muslims”.

Martin McGee OSB is a Benedictine monk and a chaplain in Worth Abbey School, Sussex. He is the author of Dialogue of the Heart: Christian-Muslim Stories of Encounter (Orbis 2017) and Christian Martyrs for a Muslim People (Paulist Press, 2008).
Back to articles