Francis – a Pope of firsts 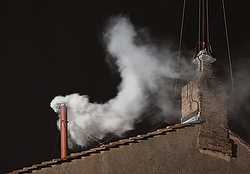 Cardinal Jorge Mario Bergoglio, who took the name Pope Francis, became the first Argentine pope and the first from outside Europe for over 1,000 years when he was elected pope on Wednesday 13 March 2013. This is how The Tablet reported the moment the white smoke appeared.

There was a long delay between the white smoke gushing from the comignolo, the chimney of the Sistine Chapel, before the world learned the name of the new pope. During this time it is likely that he was praying.

Cardinal Jean-Louis Tauran appeared first on the balcony to announce, in Latin, that a pope had been elected. He said that it was Cardinal Bergoglio and that he would take the name Francis.

Though most people were caught by surprise, Pope Francis was greeted with huge cheers from thousands of people from across the world when he stepped onto the Vatican balcony a few moments later. His first words, which he spoke in Italian, were 'Brothers and Sisters, Good Evening'.

Once white smoke appeared from the chimney of the Sistine Chapel the crowd erupted into cheers and soon after, the great bells of St Peter's Basilica began to toll. 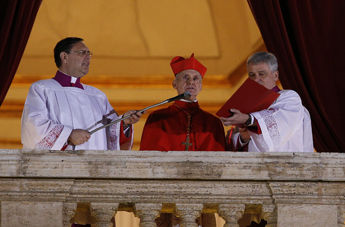 Dozens of people from all over the world waved flags and banners suddenly appeared from the crowd that read 'Viva il papa', 'Long live the Pope!' The rain that had drenched the square stopped momentarily.

It took five ballots for the new pope to gain the two-thirds plus one majority needed to become elected.

Thousands of tourists and pilgrims, huddled beneath umbrellas, braved the rain to stand and await news from the conclave. A number of those in the square are in Rome on pre-planned pilgrimages which coincided with the papal interregnum. 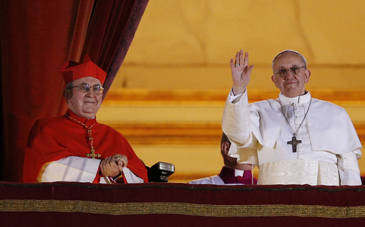 Pope Francis was born in Buenos Aires and he has also lived in Germany and Spain. His parents were working-class Italians, who had five children. His father worked on the railways in Argentina.

Read The Tablet's coverage of Benedict XVI's shock resignation and the conclave that followed.