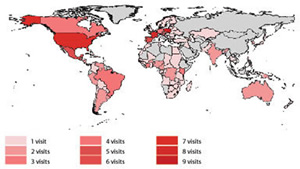 Pope John Paul II was a pope of superlatives. He was the first ever Polish pope; he travelled more than any of his predecessors; he took on the seemingly unassailable beast of communism. Even at his funeral in 2005 the crowd called for him to be made a saint immediately with cries of "Santo subito!". It has taken only six years.

John Paul II travelled more than any other pope in history, visiting 129 countries in all. This map shows where he travelled and which countries he visited the most.

The Tablet is running a special series of articles on Pope John II as his beatification approaches.

Rock of reassurance
In the first of a series of articles marking the beatification of John Paul II, a Veteran Vatican-watcher recalls one of the giants of his age.
Richard Owen, 9 April 2011

Should he be santo a little less subito?
Canonisation is expected to follow fairly swiftly for John Paul II after his beatification on 1 May. But should popes be raised to the altars? Here, a biographer of two popes argues that it is near impossible to scrutinise their lives objectively
John Cornwell, 23 April 2011

In search of real freedom
For the priest-philosopher Karol Wojtyla, life was a drama in which a person had to choose between God and false gods.
Tracey Rowland, 30 April 2011

Hope will be his legacy
The harmony and accord between Christians and Jews sought by John Paul II throughout his papacy have continued, albeit unevenly.
Edward Kessler, 30 April 2011

Truth and reconciliation
One of the late Pope's missions was to engage in dialogue with people of other faiths and none while still rejecting relativism.
Alana Harris, 30 April 2011

When the date of the beatification was announced in January, The Tablet published two polemical articles for and against beatifying the late pope only six years after his death, which you can read extracts from here. In the first, historian Michael Walsh takes issue with Rome's apparent rush in beatifying the late Pope, while John Paul II's biographer George Weigel finds much to celebrate in his legacy.

John Paul II... was undoubtedly a charismatic figure, and at his funeral there had been shouts of "Santo subito", writes Michael Walsh. But that is scarcely enough on its own for the traditionally cautious Congregation for the Causes of Saints to have hurried through the process with what seems like unseemly haste. The ceremony of beatification on 1 May, just half a dozen years since John Paul's death, would not be happening had not his successor particularly wished it to happen. One has to ask, what is the message?

It is not hard to find. When he was elected Pope in April 2005, Benedict XVI announced his desire during his pontificate was to make the teachings of his predecessor better known. The remark was just a touch disingenuous because, as prefect of the Congregation for the Doctrine of the Faith, he was already closely associated with the Magisterium of his predecessor who in 1981 had appointed him to that post. But that apart, nothing adds the seal of approval to a person's teachings quite like being made a saint.

...Because of the late pontiff's own reforms, there is no longer a devil's advocate, no longer someone whose task it is to urge the case for the prosecution. The Vatican, Western Europe's last dictatorship, has no independent civil service. All its officials hold their post at the will of the pontiff. All will have been promoted by him. In canonising their former employer a little reflected glory will no doubt be theirs. (from "Glow of his shadow", Michael Walsh)

In 1978, no one expected that the defining figure of the last quarter of the twentieth century would be a Polish priest and bishop, writes George Weigel. Christianity was finished as a world-shaping force, according to the opinion-leaders of the time; it might endure as a vehicle of personal piety, but Christian conviction would play no role in shaping the twenty-first-century world. Yet within six months of his election, John Paul II had demonstrated the dramatic capacity of Christian conviction to create a revolution of conscience that, in turn, created a new and powerful form of politics - the politics that eventually led to the revolutions of 1989 and the liberation of Central and Eastern Europe.

Then there was his evangelism. John Paul II made Catholicism compelling and interesting in a world that imagined that humanity had "outgrown" its need for God, Christ and the Church ... And then there was John Paul's social doctrine, which, again against all expectations, put the Catholic Church at the centre of the world's conversation about the politics, economics and public culture of the post-Communist future. In 1978, did anyone really expect that papal social encyclicals would be debated in the pages of The Wall Street Journal, or that a pope would rivet the world's attention in two dramatic defences of the universality of human rights before the General Assembly of the United Nations?

...His evangelical Catholicism demonstrated both the beauty of Christianity and its importance for the human future. That demonstration was his greatest "miracle"; it was his greatest gift to the Church and the world; and it is the reason why the Church was right to recognise his heroic virtues in declaring him to be among the blessed. (from "Miraculous legacy", George Weigel).