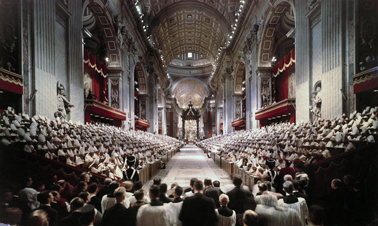 In 2012 the Church commemorated the fiftieth anniversary of the start of the Second Vatican Council, the council which radically changed the Catholic Church's understanding of itself, its mission, and its relations with other Christian Churches and with other faiths.

The Tablet commemorated the anniversary with a special issue on the Council and what it achieved, and invited Robert Blair Kaiser, who reported on the Council for Time Magazine, to give the 2012 Tablet lecture.

Read The Tablet’s editorial from the special issue, Map for the journey of faith, and highlights of the series commemorating the Council.

‘The biggest meeting in the history of the world’
Hilmar Pabel - 6 October 2012
A leading Catholic historian reflects of the winds of change blowing through Rome when bishops from 116 countries, more than the then United Nations membership, gathered for the opening of the council on 11 October 1962

Councils in the history of the Catholic Church once dealt with legal matters in legalistic language – doctrine and discipline were their raison d’être. John XXIII overturned all that, and in their place brought joy, passion and reconciliation. But can Vatican II really be called prophetic?

It was at the Second Vatican Council that, for the first time in history, women were allowed into an assembly of bishops. Then they were mere observers but it was the beginning of an unstoppable process