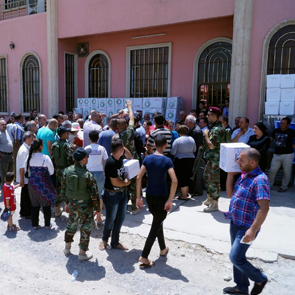 Christians in the UK have condemned the Government’s muted response to the persecution of Christians in Iraq that has forced more than 3, 000 people to flee the second city, Mosul, with little more than the clothes they were wearing.

Francis Campbell, former UK Ambassador to the Holy See, criticised the Government for its failure to speak out over what he described as ethnic cleansing.

“A culture and civilisation is being destroyed and our political leaders are silent,” he said, asking Prime Minister David Cameron via the social networking site Twitter: “Why is the UK silent on the ethnic cleansing of Christians from Mosul?”

A Foreign Office spokesman told The Tablet: “The threat to Christians in the Mosul area is a particular tragedy, given that it has one of the oldest Christian communities in the world. We will work with the new Baghdad Government to raise these matters further.”

Meanwhile the former Chief Rabbi described the persecution of Christians in the Middle East and elsewhere around the world as "one of the crimes against humanity of our time", adding that he was "appalled at the lack of protest it has evoked".

Speaking on Thursday in the House of Lords, in a debate on religious freedom organised by Catholic peer Lord Alton, Lord Sacks said: "The persecution of Christians throughout much of the Middle East, sub-Saharan Africa, Asia and elsewhere is one of the crimes against humanity of our time, and I am appalled at the lack of protest it has evoked ... What is happening to Christians in these places is the religious equivalent of ethnic cleansing."

Mr Campbell, who is to take over as vice-chancellor of St Mary’s University Twickenham in September, and others including the official Twitter account for the Church of England changed their profile pictures to an image of the Arabic “N” symbol, which stands for Nazarene, or Christian, and is reportedly being painted on the homes of Christian families in Mosul to single them out.

The Archbishop of Canterbury Justin Welby urged social media users to show their concern for Iraqi Christians by adopting the hashtag #WeAreN. He tweeted on Wednesday: "Share solidarity of prayer and love with victims of terrible suffering in Iraq, especially threatened Christians of Mosul. #WeAreN."

A demonstration organised by the five Iraqi Eastern Churches in support of Iraqi Christians is to take place in London on Saturday at noon at the Houses of Parliament.

The exodus of 3,000 followed a warning read out in Mosul’s mosques on 18 July, and broadcast on loudspeakers, that ordered Christians either to convert to Islam, to submit to its rule and pay a religious levy, or face death.

“If they refuse this they will have nothing but the sword,” the announcement read.

The 57-member Organisation of Islamic Cooperation condemned the forced displacement, while the Kurdistan regional government offered a safe haven.